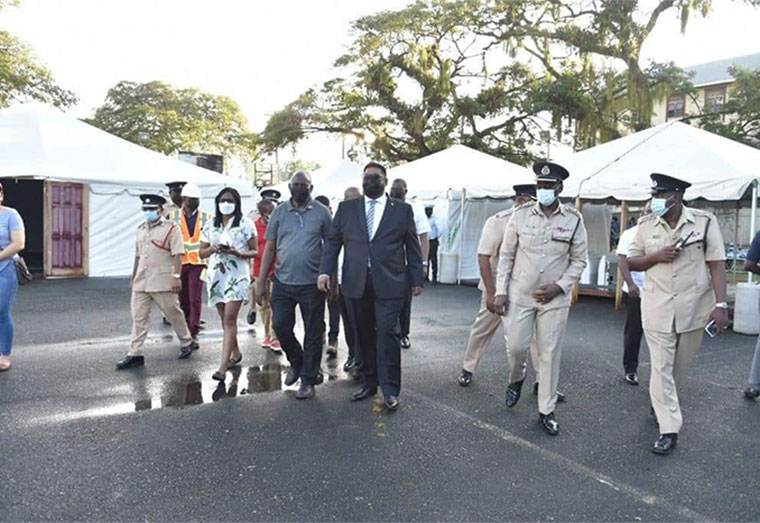 …says those responsible will be held accountable

President Irfaan Ali, on Sunday flayed the Guyana Fire Service for its “poor response” to a fire that wreaked havoc at the Brickdam Police Station, completely destroying at least five departments and buildings in its path including the main building that housed the Enquires and CID Departments.

At the time, President Ali was speaking at the scene of the fire.

The historic Brickdam Police Station was the Headquarters for Regional Police Division 4 ‘A’. On Saturday, approximately 80% of the police station was reduced to ashes after a fire broke out in a building in the compound at around 11:06hrs. The Guyana Fire Service reportedly arrived on the scene within five-to-six minutes, however, despite the efforts of firefighters, the fire quickly spread to other wooden buildings in the compound.

In fact, all of the buildings in the compound were completely destroyed with the exception of the station lockups, barracks and Impact Base. Additionally, a few police vehicles were slightly damaged, while a number of privately owned vehicles that were detained in relation to matters under investigation were destroyed or damaged.

President Ali said it was upsetting that the Fire Service could not have effectively responded to a fire right in its backyard when the Government would have invested hundreds of millions of dollars into its operations.  He warned that people will be held accountable.

“In this country people would have to be held accountable for their actions. We cannot be making investment in state apparatus and state institutions and do not get the results from those investments,” President Ali made clear.

He said based on initial reports, firefighters were ill-prepared when they arrived on the scene on Saturday.

“The state can’t provide you with basic things like safety equipment for you to wear as fire officers and you turn up without them. It means that you are not in any state of readiness to respond to an emergency. It means from a personal level you are not taking the job that you are entrusted to do with the level of seriousness that is necessary,” he said.

Though business people offered support at the time of the inferno, the Fire Service was unable to utilize the resources offered.

“Many business people around the area called; they called me directly during the course of the fire, offering different support, including access and source of water. One businessman has an entire pool and a well that flows continuously, and the fire service was not in a position to make use of that offer. This lackadaisical approach, inefficient approach and indifferent approach cannot continue. No, it cannot continue,” President Ali said.

The Government, the president said, will be enlisting fire experts from the diaspora to train local firefighters to be able to professionally and adequately respond to fires.

The Head of State said based on statements of threats made in the US, his Government will solicit international assistance to investigate the fire. “This is coming on the heels of threats made on the capital city from New York, and this is not the first time, and I am not going to take this lightly. I am going to ask for international support to investigate, to follow any lead, and to ensure that our capital remain safe,” the President assured.

He added: “The investigation for this fire is still ongoing but I am concerned, and I think out of concern, out of an abundance of caution at this very early stage, we will no spare no effort in reaching out for international support.”

He said notwithstanding the significant loss of assets, the Ministry of Home Affairs and the Guyana Police Force must be applauded for their quick response. “We never lost the ability to deliver service from the station to the population,” he posited.

It was noted that short to medium term measures are being put in place to acquire assets to aid in the delivery of police services within the division. “I have asked them to look at containerized office, and also reconfiguration of containers into office type facility to support their operation and at the same time,” the President said.

‘Confession alone will not do!’

Mon Oct 4 , 2021
Support Village Voice News With a Donation of Your Choice. —-Paul Slowe underscores need for thorough investigation into Brickdam fire Retired Assistant Commissioner of Police, Paul Slowe said notwithstanding an alleged confession by the suspected arsonist, there needs to be a thorough investigation into the fire that destroyed the Brickdam Police Station last Saturday. Slowe’s statement comes even as some […]