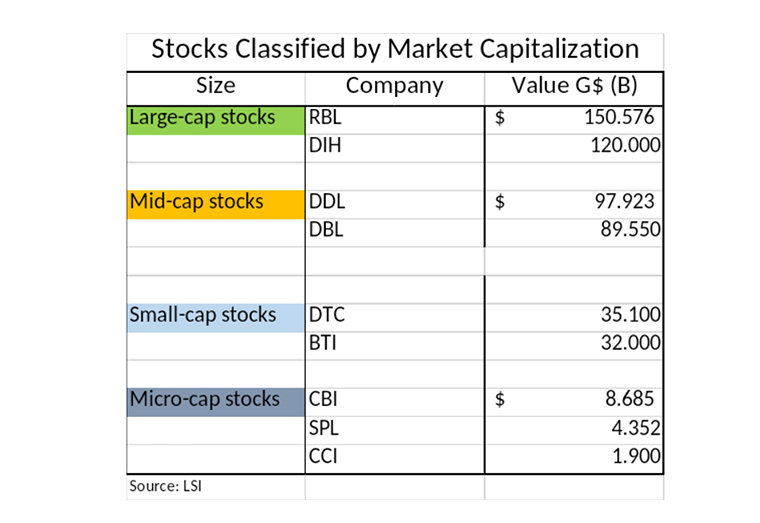 Trading Frequency
In the month of August, seven stocks were active.  Figure 1 below shows that the most active stocks were those of BTI, DIH and RBL which traded in each of the five trading periods during the month.  The stocks of DDL traded four times during the month while those of DTC traded three times.  DBL traded twice and SPL once.  CBI and CCI continued to lag in trading activity with zero trades.

Stocks in the index are now being classified by the size of their market capitalization and are displayed in tabular form below.  With the addition of DIH to the large-cap stocks category, this group of stocks has assumed the dominant share of market value with 50.099 percent of the share.  The share of the mid-cap stocks has dropped to 34.712 percent.  The small-cap stocks now contribute 12.424 percent of the value of the LSI while the micro-cap stocks account for 2.766 percent.

Tax Advantage of Stock Trades
Four stocks traded in the first trading period of September 2021.  A total of 54,009 stocks in the Lucas Stock Index traded this week as against 18,537 last week.  The higher trade volume resulted in investors enjoying tax benefits of G$1.824 million this week.  The stocks of DIH accounted for 65.239 percent of the tax gain while those of RBL generated gains of 14.415 percent.  BTI stocks accounted for 12.495 percent of the benefits and those of DTC accounted for 7.851 percent of the tax benefits.   With 36 weeks of trading gone, the tax gains for investors have amounted to an estimated G$279.694 million.