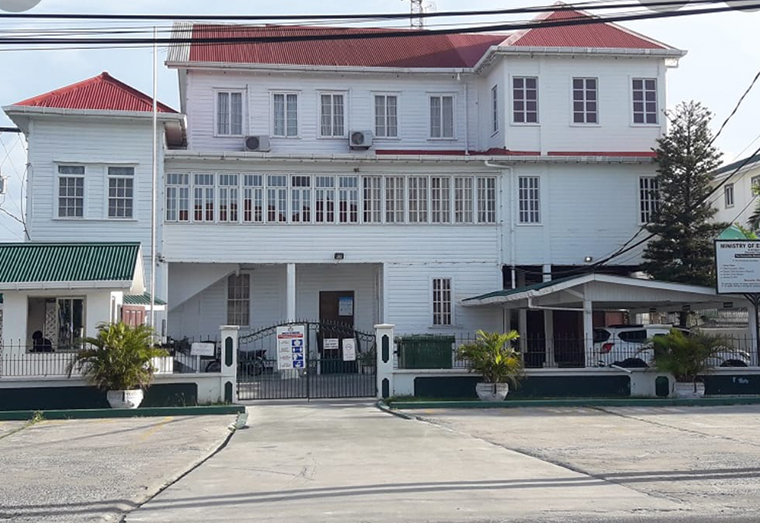 …more than 20 locked out as ministry enforces vaccine requirement

Three education officers were reportedly escorted out of the Ministry of Education’s Lot 21 Brickdam office by the police and more than 20 others were locked out after it was found that they were not vaccinated against COVID-19.

A senior education officer, who was among those forcefully removed, said staff were barred from entering the building ,though the Education Ministry did not issue a memo announcing the implementation of the COVID-19 measures. That aside, he said staff should not be forced to take the COVID-19 vaccines. “You cannot compel someone to take something that they don’t want,” he said, while noting that it is quite unfortunate that staff who would have worked beyond the call of duty are being treated in such a manner.

In an interview with Village Voice News, the senior education officer who asked not to be named out of fear, explained that when he arrived at work on Tuesday morning, the security guard on duty asked him to produce a COVID-19 vaccination card. He said at the time, several other persons had already been locked out.

“About 5-10 minutes later, she came back and she started to video me, and I pulled out my phone to do the same, unfortunately my phone got frozen. Subsequently another male security officer came and said you have to leave the building, the police are here to escort you,” the man recalled.

He said the police attempted to place cuffs on his hands but he kept pulling his hands away. However, he said two other female officers, who were unvaccinated, were handcuffed and escorted out of the building along with him.

The senior officer while being escorted out of the building, maintained that there was “nothing in black and white” stating that staff attached to the Ministry of Education must be vaccinated before entering the building.

“The Ministry of Public Health issued a statement, and then all government ministries just mimic it and circulated it as though its theirs,” he stated.

The senior education officer, who has been working with the Ministry of Education for more than 15 years said there should be no imposition of the vaccines on staff. He said some of the other staff who were locked out, worked with the Education Ministry for more than 20 years.

On Monday, the Guyana Teachers’ Union (GTU) withdrew from all engagements with the Ministry of Education, including the ongoing assessment of schools, over government’s vaccination policy for teachers ahead of the September 6 reopening of schools.

In a statement issued on Monday, the Education Ministry advised teachers who wish not be vaccinated against the Coronavirus Disease (COVID-19) will be required to submit a negative PCR test once a week. The test is to be done at an approved private facility.

“Teachers who do not report for duty will be marked absent,” the Education Ministry said while noting that the measures also apply to the ancillary staff of each school (cleaners, administrative and other support staff).

“Our teachers were good enough to teach NGSA, CSEC and CAPE, mark NGSA, attend workshops and even participate in school preparedness assessments.  Our members have called on us to act now in their best interest. We are not opposed to vaccination, but it must be voluntary,” GTU said in a statement.

In urging teachers to get vaccinated, the Education Ministry advised that the Ministry of Health currently has the Astra Zeneca, Johnson and Johnson, Sinopharm and Sputnik V vaccines available for the adult population.

Tue Aug 24 , 2021
Support Village Voice News With a Donation of Your Choice. A 26-year-old Guyana Defence Force (GDF) soldier, Wilmot Warde, died on Tuesday after the car he was driving crashed along the Haurauni Public Road Soesdyke, Linden Highway. According to police report, at about 07:10 hours, motorcar # PLL 6077 was proceeding north along the western side of Haurauni Public Road […]