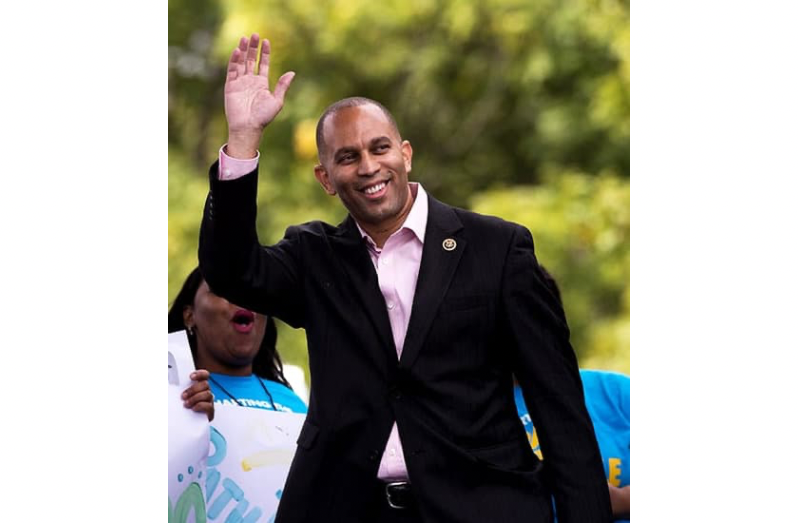 US Congressman Hakeem Jeffries – the Chair of the House Democratic Caucus – called on the Joe Biden Administration to remove US Ambassador to Guyana Sarah-Ann Lynch as he joined thousands of Guyanese in the streets of Brooklyn to march against racial discrimination in Guyana.

In his address to thousands of Guyanese at Grand Army Plaza, Brooklyn, New York, the US Congressman said it is time for the Biden Administration to remove US Ambassador Sarah-Ann Lynch from Office.

“The first thing I think the Biden Administration needs to do is to get rid of the Trump-appointed Ambassador to Guyana,” Congressman Jeffries said.

The main opposition in Guyana – the A Partnership for National Unity + Alliance For Change (APNU+AFC) – has accused the US Ambassador and other foreign diplomats of interfering in the affairs of Guyana during the highly controversial 2020 General and Regional Elections, which spanned for a period of five months and was marred by allegations of electoral fraud.

Quoting Martin Luther King, US Congressman reminded those represent that injustice anywhere is a threat to justice everywhere, noting that the lives of black people matter regardless of their location be it in the US, the Caribbean or Guyana.

“We stand in solidarity with each and every one of you to deal with the situation down in Guyana,” he told the massive crowd.

Ahead of the rally, Guyanese from across the US, Canada, Jamaica and Guyana marched from Church and Flatbush Avenues to the Grand Army Plaza. During the march, Rickford Burke, President of the Brooklyn, New York-based Caribbean Guyana Institute for Democracy (CGID), endorsed calls by the US Congressman for Ambassador Lynch to step down.

“We are joining Congressman Jeffries, in calling for the resignation of the US Ambassador Sarah Ann-Lynch, who have been complicit with PPP,” Burke said.

He said the US Ambassador to Guyana should do the honorable thing and resign.  “We are demanding that Sarah Lynch goes, and if she doesn’t resign we are going to end her career. The Chairman of the Democratic Caucus in Congress, one of the highest ranking black members in the United States Congress, called for her to go, if she doesn’t go, we will end her career,” he warned.

APNU+AFC Member of Parliament, Amanza Walton-Desir also lobbied for the Irfaan Ali Administration and US Ambassador to be removed from Office. “Guyana belongs to all Guyanese, and we must demand that the PPP/C installed regime govern Guyana in accordance with that fact. They operate as if they have 100% of Guyanese votes, and that’s the manner, in which they govern. They are discriminatory, they are racist, and so we are here today, on US soil to sound the call loud and clear for the PPP/C regime has to go, that Sarah Lynch, the US Ambassador, should go, and we are saying that enough is enough,” MP Walton-Desir said.

Executive Director of the Office of the Leader of the Opposition, Aubrey Norton said he was pleased with the overwhelming support from Guyanese home and abroad, who have stood up against racial discrimination in Guyana.  “One of the first things the regime did when they came to power was to vote against a resolution that is aimed against ending racism, that in itself suggest that its agenda was racist from the beginning and so this is an anti-ppp, anti-racist march and it is justified because the actions of the PPP are clearly racist in nature,” Norton said.

Mayor of Georgetown, Ubraj Narine said the PPP/C Administration has turned into a dictatorship. “They have imposed recently a town clerk on the city,” he pointed out while describing the Ali Administration as a corrupted and fraudulent government.

“More so I am here to represent my Guyanese people, all those people who had fired, Black people, Indian people, Amerindian people, all of the six races who have been suppressed, and only one set of group, friends and family are getting the benefit,” he added.

Acting Chief Whip, Ganesh Mahipaul said it was important for Guyanese to unite in their call to end the injustices being committed in Guyana.

PPP/C wants to talk with Congressman Jeffries after blistering rebuke

Mon Aug 16 , 2021
Support Village Voice News With a Donation of Your Choice. Hours after US Congressman Hakeem Jeffries joined thousands of Guyanese in Brooklyn, New York to rally against injustice in Guyana, Prime Minister, Mark Phillips said the People’s Progressive Party/Civic (PPP/C) Administration is opened to having discussion with the Congressman on matters of mutual interest. “We invite the Congressman Jeffries to […]