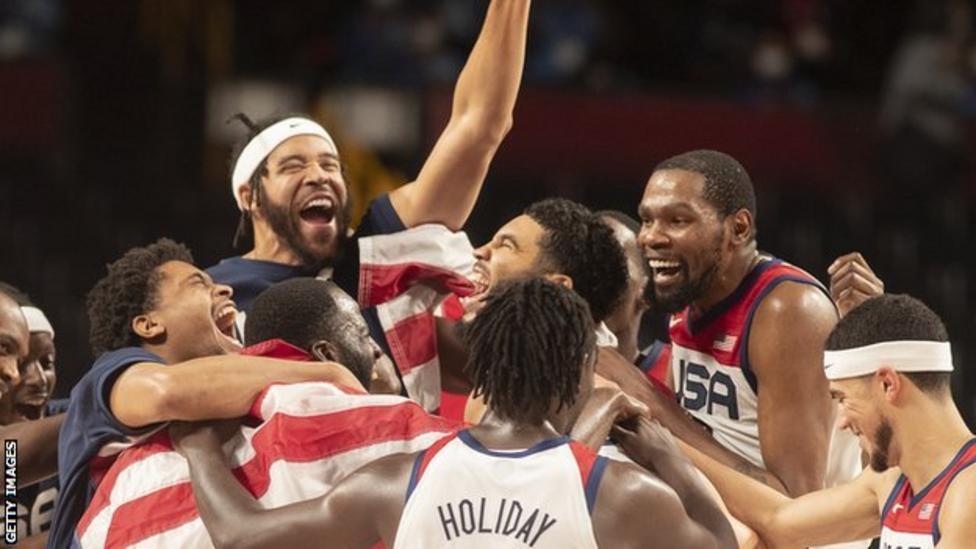 BBC – The USA celebrated a fourth successive Olympic men’s basketball gold and a golf title for Nelly Korda, while Kenya swept to a one-two in a sweltering women’s marathon on the penultimate day of the Tokyo Games.

Kevin Durant was the standout player with 29 points as Team USA beat France 87-82 to end a shaky campaign with a victory that gave them a 16th Olympic gold in the event.

Korda had to hold her nerve when a tropical storm caused play to be suspended for 49 minutes with just one hole left to play.

There was no storm in the northern city of Sapporo, where the women’s marathon was taking place early in the morning to avoid the worst of the heat but the temperature still reached 28C.

Peres Jepchirchir won gold ahead of fellow Kenyan Brigid Kosgei, with American Molly Seidel taking a surprise bronze in what was only her third marathon.

Team USA’s preparations for the Olympics had been far from ideal with surprising losses to Nigeria and Australia in warm-up matches.

Their Tokyo campaign got off to a bad start when they lost their opening game to France as their 25-game winning streak in Olympic basketball came to an end.

But against the same opponents in Saturday’s final they got their revenge to claim a seventh gold medal out of the last eight on offer.

This team may not have lived up to USA outfits of the past but one player who consistently shone was Brooklyn Nets star Durant.

The 32-year-old led by example throughout the tournament, becoming Team USA’s all-time leading scorer during the Games.

Having averaged 27 points per game in the knockout phase Durant sealed a third personal gold medal after being part of triumphs in 2012 and 2016.

World number one Nelly Korda led the golf by three shots overnight but her lead had been reduced to a single shot when play was suspended because of a tropical storm that had been threatening to cut short the competition.

The 23-year-old returned after the delay to par the 18th for a two-under 69 and a 17-under total that held off Japan’s Mone Inami and New Zealand’s Lydia Ko.

Inami then beat Ko on the first hole of a play-off to secure the silver medal.

With her bronze, Ko became the first golfer to win two Olympic medals having also picked up silver in Rio 2016 when the sport made its first appearance at a Games since 1904.

Victory capped an incredible six weeks for Korda, who rose to the top of the world rankings after winning her maiden major at the Women’s PGA Championship in June.

Kenyan one-two in the marathon

Jepchirchir said she was happy for her family and country after the race. Kenya took gold and silver in sweltering Sapporo with 27-year-old Peres Jepchirchir claiming the top step of the podium for the women’s marathon.

She beat world record holder Brigid Kosgei with a late surge as the pair were matched for pace going into the final mile.

American Molly Seidel took bronze in a distance she has only contested on two previous occasions.

The heat and humidity proved a challenge for many athletes in Sapporo, despite all of the long distance events (20 and 50km race walks and marathons) being moved to the city, which is 500 miles north of Japan’s capital.

Fourteen athletes failed to complete the full 26.2 miles, but 74 finished the course.

Those finishers included Sinead Diver, who was making her Olympic debut at the age of 44 having only taken up running 11 years ago, with the Australian finishing 10th.

Christian Sorum and Anders Mol won gold in the men’s beach volleyball to give Norway their maiden Olympic medal in the sport.

The Norwegians beat Russians Viacheslav Krasilnikov and Oleg Stoyanovskiy 21-17 21-18 in the final, while Qatar’s Cherif Younousse and Ahmed Tijan finished third to take the bronze.

There was a surprise win in the boxing where unheralded Brazilian Hebert Sousa took the middleweight gold after a remarkable turnaround against Ukrainian world champion Oleksandr Khyzhniak.

With around 90 seconds left, Sousa, who had only just kept himself in the fight until that point, launched a powerful left that sent his opponent to the floor and sparked wild Brazilian celebrations.

Meanwhile, there was an upset in the rhythmic gymnastics where Israel’s Linoy Ashram won the individual all-around gold medal to break a Russian stranglehold on the title that stretched back to 2000.

Russian twins Dina and Arina Averina had been hot favourites for gold and silver, with Dina disappointed to miss out on top spot.

A gold medal for me – a handbag for my mum!

Gable Dan Stevenson is a student at the University of Minnesota, and was named the 2021 co-winner of the Dan Hodge Trophy, awarded to the top college wrestler of the year

American youngster Gable Dan Steveson says he is going to treat his mother to a new designer handbag after he won gold in the freestyle wrestling (125kg).

The 21-year-old scrambled the victory in the final seconds of the match, with a frantic takedown of his Georgian opponent Geno Petriashvili. “I knew I could fire that last shot off and give him that last trick, and he bit it,” he said.

“I’ll probably take my family out to eat – we’ve all got to eat steaks back home. I’ll buy my mom a Louis Vuitton purse. She’s back at home breaking a sweat watching me wrestle, so she deserves something nice.”

Sun Aug 8 , 2021
Support Village Voice News With a Donation of Your Choice. Trinidad and Tobago Guardian – An attempted hit on the life of an ambulance driver attached to Sangre Grande Hospital backfired on those allegedly involved. Two women are in police custody while the victim, who was jabbed on his neck by syringe, was treated at hospital and kept for observation. […]