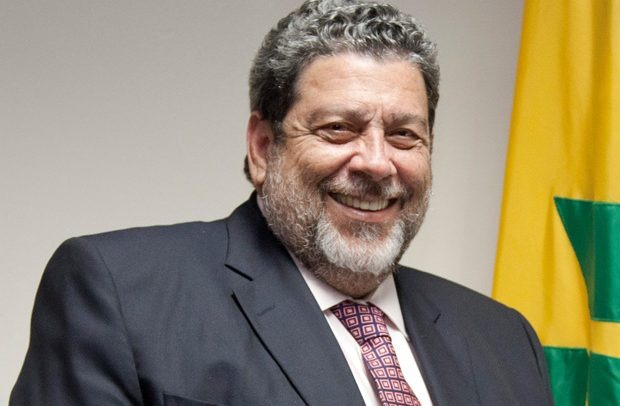 (BARBADOS TODAY) The Caribbean Community (CARICOM) condemns in the strongest terms the violent attack on the Prime Minister of St. Vincent and the Grenadines, Dr. Ralph Gonsalves.

“This reprehensible act is an affront to our democratic principles and practices. The conduct of peaceful protest is a fundamental civil and political right that represents a healthy element of our democracy. Its degeneration into violence and physical assault must be denounced unreservedly,” Secretary General, Irwin LaRocque said in a statement.

He said CARICOM looks forward to the perpetrator of this aggressive act being brought to justice. “The Community calls for peace and calm in St. Vincent and the Grenadines. The Community wishes the Prime Minister a speedy recovery from his injuries.”

Citizens in St. Vincent were protesting against the amendments to the public health bill and mandatory vaccination. Gonsalves was reportedly on his way back to Parliament when he was hit by an object. He was reportedly seen bleeding from the head.

Also joining in the condemnation was chairman of the Caribbean Community (CARICOM), Prime Minister Gaston Browne who warned against the “introduction of violence into the political of CARICOM”. Gonsalves, 74, was flown to Barbados for further medical treatment after he was struck on the head on Thursday, during a demonstration organised by the main opposition New Democratic Party (NDP) and two public sector trade unions against amendments to the Public Health Act.

The bill was passed during the early hours of Friday morning in the Parliament with the government having indicated that the amendment to the legislation would allow for the vaccination of public sector workers, considered to be front line workers.

The amendment allows for the removal of the word “voluntary” from a section of the law that speaks to vaccination against an illness that has triggered the declaration of a public health emergency — as is the case with the coronavirus (COVID-19) pandemic.

A senior government minister during the debate early Friday morning, told legislators that n unidentified woman has been detained by the police, while Gonsalves son, Camillo, who is the Finance Minister, said “I want to say that clearly. This is not some scratch. This was an attempt on the prime minister”.

In his statement, Browne said that “as chair of the Caribbean Community (CARICOM), Prime Minister of Antigua and Barbuda and in my own capacity, I condemn the physical assault upon the Prime Minister of St Vincent and the Grenadines, Dr Ralph Gonsalves during a protest organised by the opposition political party.

“The assault was serious and almost fatal. As it is, Dr Gonsalves injury to his head is still being medically assessed. The introduction of violence into the political life of CARICOM is shameful and deplorable and those responsible for it must be brought to justice with all due dispatch,” Browne said.

He said that the assault is all the more “shameful because it occurred as the Prime Minister was walking into the national parliament, the highest law making body of the State where a robust debate was taking place in full regard for democratic principles of dissent and discussion.

“There is no place for violence and personal physical assaults in our CARICOM democracies where the rule of law prevails and rights, including the right to peaceful protests are fully upheld,” Browne said, adding that “all law abiding and well thinking people of CARICOM should join in resolution that such gratuitous violence will not be tolerated in our peaceful societies.

“Our prayers are with Dr Gonsalves for a speedy recovery.  He has been and remains an invaluable Caribbean son and leader, deserving of the greatest respect,” Browne said. Antigua and Barbuda Ambassador to the United States, Sir Ronald Sanders said the “physical assault on…Gonsalves, at an opposition organised anti vaccine protest, narrowly escaped being fatal. “This development in Caribbean politics is reprehensible. We should all strongly condemn it,” he added.

Meanwhile, the University of the West Indies also expresses its dismay and disappointment in the development in Kingstown, Saint Vincent that resulted in physical injury to Gonsalves.

The event that featured the hurling of a missile intended to injure Dr. Gonsalves constituted an act of hooliganism against his personhood and of vandalism against the collective nationhood, UWI said. “The University community condemns the dastardly action and joins with the resilient and heroic people of Saint Vincent and the Grenadines. They have risen time and time again to validate the leadership of the ‘comrade’ who has provided for decades a model of progressive post-colonial democratic politics. It is cowardly for any individual, interest group, or opposition force, to resort to ‘stone throwing’ in the midst of a complex national discourse in which saving lives and rebuilding the economy are on the table. Neither the nation, nor its leader should be subject to this ‘madness’ in the aftermath of what has happened in Haiti, and the daily COVID-19 devastation of African people in the aftermath of George Floyd,” UWI said.

According to UWI Caribbean people are located at the centre of contemporary conversations about emerging new world order, and such actions place a stain upon the excellent reputation of the ‘Vincy’ community. It’s a mark, however, made by a small minority, that will be erased by the unrelenting efforts of the majority. Citizen Gonsalves knows better than most, the nature of such things, and no doubt will return to the centre of the conversation, clearer and stronger than ever.

Sat Aug 7 , 2021
Support Village Voice News With a Donation of Your Choice. …says 10 Covid deaths and thirty-two dismissals per week earn govt  a bad report  Former President David Granger has rapped the PPP/C Government for what he described as its cold-hearted response to the dismissals of hundreds of public servants at the average rate of 32 persons per week, the number of deaths […]