Today is the 36th Death Anniversary of Linden Forbes Sampson Burnham. He was the first Prime Minister of independent Guyana and with the 1980 Guyana Constitution, the first President with Executive responsibility. At least two-thirds of the population is below 40 years which suggests most would not have experienced Burnham leadership first-hand. It cannot be denied that in the same demographic his contribution to Guyana has suffered from improper contextualisation given the nature of Guyana’s deceptive and race-based politics.

Thus, instead of putting the truth of Guyana’s history in context, and having the society benefit from such knowledge in the process of growth and development, Burnham has been painted as a villain by those who hate or envy him or could seek political mileage from such propagation. This attitude of looking at Guyana’s history may not affect those who traffic in the behaviour but the many in society, particularly the young who are the primary beneficiary of history.

Development of any nation, including Guyana, relies on the intellectual growth and maturity of its citizens. To the extent the young are being denied such opportunity they will inherit a society in backwardness, hate, and division, all of which are counterproductive to nationhood and nation building. Ignorance threatens efforts to be One People One Nation One Destiny and makes a mockery of the constitutional right to free education from nursery to university. It suggests that even where these opportunities for learning were first made available by the Forbes Burnham government critical learning has not taken place.

It is opportune on the 36th death anniversary to urge an honest and truthful examination of Burnham’s contributions to Guyana, the region and world. To his credit as Prime Minister of independent Guyana he laid Guyana’s foundation for self-sufficiency. Among this included the promotion of national appreciation of an indigenous Guyanese identity. This included dress code (shirt jac for instance), food, pride in ethnic diversity and national holidays representing the three major religions, naming of places in honour of our First Peoples, non-aligned foreign policy, local manufacturing, education, housing, energy, sports, infrastructures, grow more food programme, regional integration, international alliances, and the pursuit of worldwide peace.

A part of Burnham’s foreign policy was undoubtedly driven by recognition Guyana at the time had a border dispute with his eastern neighbour Suriname and border controversy with its western neighbour Venezuela. It was also his fate or fortune that he governed during the oil crisis period that arose from the Organisation of the Petroleum Exporting Countries (OPEC) raising prices that put the world in an economic tailspin.

Small nations like Guyana that did not produce oil, of which most of the economy relied on, had to make choices. Some of the choices by the Burnham government included restriction on wheat flour, split peas, salt fish, foreign fruits, Irish potatoes, etc. The government countered by urging Guyanese to rely on self-sufficiency through food substitutes like rice flour, local peas (blackeye, mung), eddoes, local salt fish and preserved fruits which attracted the ire of some and became a divisive political issue.

In the last years of Burnham’s presidency, it has been said, by many, his government and the opposition-  the People’s Progressive Party- then led by Dr. Cheddi Jagan who was Opposition Leader were examining ways to form a type of government that would have the representation of both the governing and opposition sides. There is so much to learn about the leadership of Burnham through the formal education system and elsewhere. His party, the People’s National Congress Reform should think about this today as they pay tribute to him at his resting place in the Botanical Gardens.

Fri Aug 6 , 2021
Support Village Voice News With a Donation of Your Choice. …as PNCR Marks 36th death anniversary of Burnham Amid a widening rift at Congress Place over his leadership, PNCR leader, David Granger on Friday called on party members to recommit to the ideals of its founder, Forbes Burnham by eschewing division and suppressing schisms, factionalism and opportunism. Granger made the […] 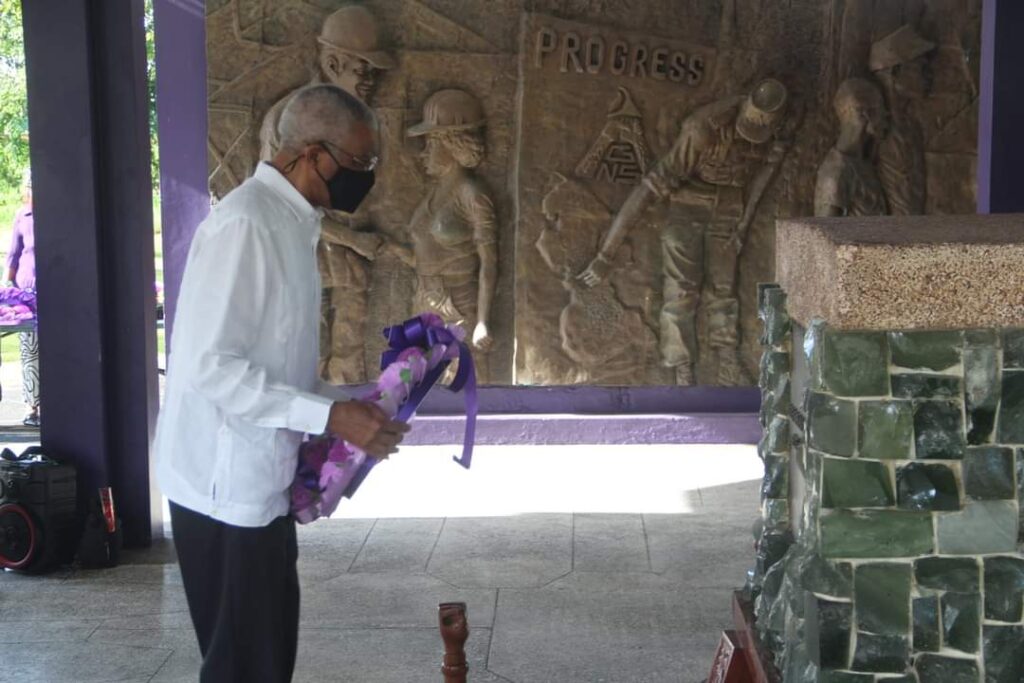