Since the International Decade for People of African Descent Assembly – Guyana (IDPADA-G) began its work within the 2015-2024 decade, thousands of Afro-Guyanese have been empowered and positively impacted, Chairman of the organisation, Vincent Alexander has said.

Over the years, IDPADA-G has been granted annual Government subventions to conduct its work while donations beyond the Government were also received. The work of IDPADA-G is spread across six committees: education, equity, economics, expiation, environment and youth.

In the area of empowerment, IDPADA-G has tackled this through skills training and the development of small businesses. During an interview with this newspaper IDPADA-G Chairman, Vincent Alexander explained that the theme for the decade — ‘People of African descent: recognition, justice and development’ — has steered the Assembly to fulfil its mandate for development through economic empowerment.

Some of the actions taken towards this over the years include the training of contractors in the tendering process to increase their chances of being contracted for projects; training in strategic planning for organisations and training for Community Development Personnel to engage in community development.

IDPADA-G has also held business conferences in all coastal regions and in Linden. Invited to these conferences were representatives of the Small Business Bureau (SBB), the Guyana Revenue Authority (GRA), the National Insurance Scheme (NIS), the Ministries of Labour and Health and financial institutions.

The Assembly also worked to connect businesses with access to grants and private donors; it trained persons to start up their own businesses and assisted others in entering the agriculture sector as entrepreneurs.

Meanwhile, IDPADA-G’s Youth Committee has been very active over the years. They have held a business expo with over 30 businesses, an Invest-A-Thon competition, a debating competition, an essay competition, a long-term online education and empowerment programme called ‘Spill the Facts’, two national conferences to discuss issues affecting youths of African descent and rehabilitative work with incarcerated youths.

“In every instance where we gave to young people, we gave them monetary prizes with the intention that those prizes can go towards enhancement such as through the business expo and the Invest-A-Thon,” Alexander said. “One of our intentions is not to just give them prizes but to keep in touch with them to see how they are progressing.”

More and more, youths in Guyana have begun to turn to IDPADA-G to participate in education and empowerment areas.  In July 2019, IDPADA-G launched its Cooperative Credit Union Society to financially empower Afro-Guyanese in accordance with the theme of the International Decade. Alexander updated that the Credit Union has since commenced the process of disbursing loans. It already has over 1,000 members and counting.

He said: “The idea behind the Credit Union is to give people of African descent access to low-interest capital. We’ve found that people have difficulties at the banks whereby the conditions for even a small loan are sometimes very stringent. So, what the credit union intends to do is to make it easier for people of African descent to access loans.”

On the philanthropy end, since the emergence of the COVID-19 pandemic in Guyana, IDPADA-G has assisted persons with food hampers and, when the nationwide flooding occurred it continued its assistance. It has also assisted persons with their educational drive; assisted fire victims in rebuilding their homes; assisted residents of Mocha Arcadia to plan and execute Market Days and conducted programmes in Linden to prepare teens for adulthood.

Regarding the important issue of justice, it has also worked with the family of the slain Henry boys –Joel and Isaiah Henry — to provide counselling services. IDPADA-G is also part of an ongoing action group with the United Nations (UN) in Guyana to map out strategies towards addressing issues of human rights.

There has also been representation to the Ministry of Education for the enhancement of the history curriculum to better emphasize the contribution and history of people of African descent. IDPADA-G has also signed an MOU with the National Archives of the Netherlands (NAN) to foster a relationship that allows for access to historical documentation, among other things.

The UN General Assembly proclaimed 2015-2024 as the International Decade for People of African Descent citing the need to strengthen national, regional and international cooperation in relation to the full enjoyment of economic, social, cultural, civil and political rights by people of African descent, and their full and equal participation in all aspects of society. Following the end of the decade, Alexander said that it is the plan, locally, that the work of the Assembly will continue so that positive development can continue through this means for Afro Guyanese.

Boyer, Alphonso and Mohamed in US$600M shore base

Mon Aug 2 , 2021
Support Village Voice News With a Donation of Your Choice. …promise 2,000 jobs, minimal environmental impacts   A group of local entrepreneurs have pooled their resources with the intention of establishing a US$200-600 million base port facility called ‘Port of Vreed-en-Hoop’ which will have the potential to service Guyana’s offshore oil and gas and other shipping needs. According to a project […] 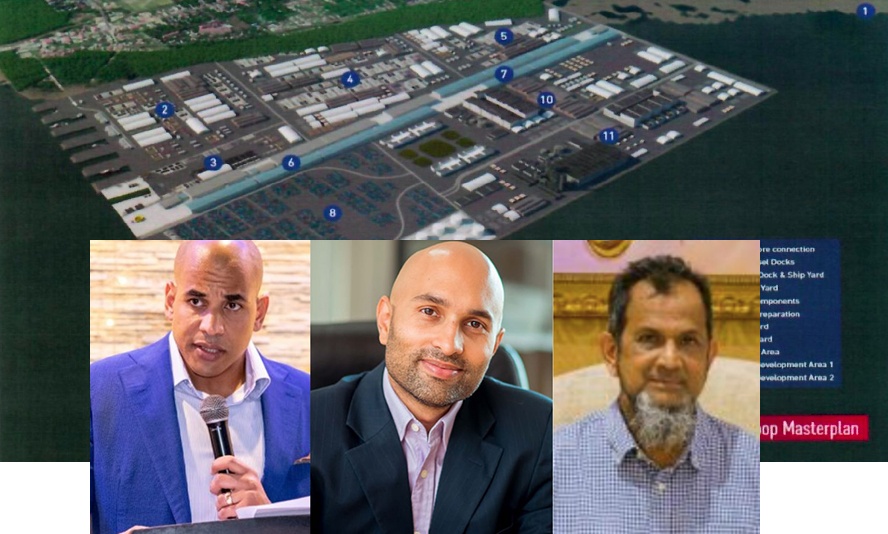