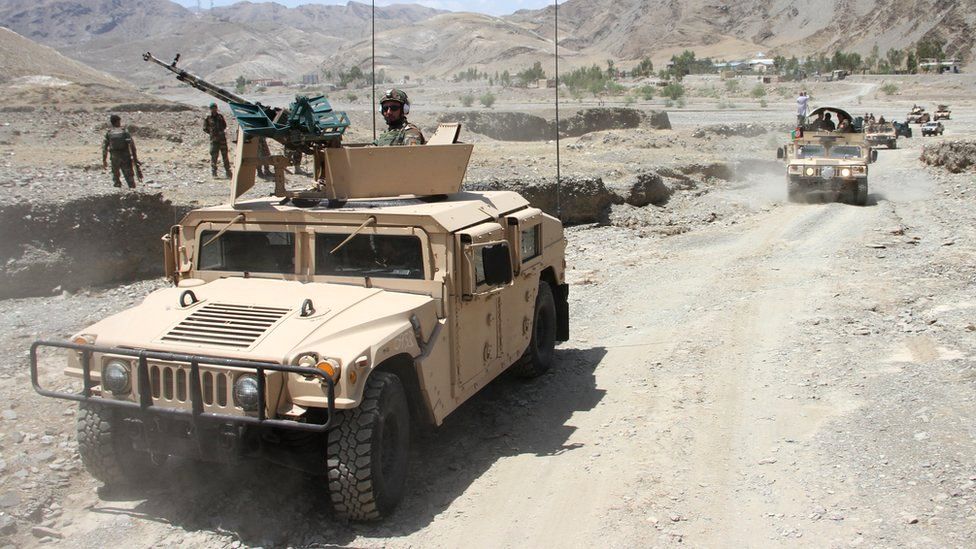 (BBC) The Afghan government imposed a curfew across almost all of the country on Saturday in an attempt to stop the Taliban from invading cities.

Aside from the capital Kabul and two other provinces, no movement will be allowed between 22:00 and 04:00.

Fighting between the Taliban and Afghan government forces has escalated over the past two months as international troops withdraw from the country.

The militant group is estimated to have captured up to half of all territory.

It has moved swiftly in the wake of the US withdrawal, retaking border crossings and other territory in rural areas.

The Taliban – a fundamentalist Islamist militia who were pushed out of power by the US invasion nearly 20 years ago – has also seized key roads as it seeks to cut off supply routes. Its fighters have been closing in on a number of major cities, but have not yet been able to capture one. “To curb violence and limit the Taliban movements a night curfew has been imposed in 31 provinces,” the interior ministry said in a statement, adding that Kabul, Panjshir and Nangarhar were exempt.

As the Taliban continues to advance, fierce clashes have taken place this week on the outskirts of the city of Kandahar.

In response, the US launched airstrikes against militant positions in the area on Thursday. But with US operations in Afghanistan officially due to end on 31 August, there are concerns about the months ahead.

US-led forces ousted the Taliban from power in Afghanistan in October 2001. The group had been harbouring Osama Bin Laden and other al-Qaeda figures linked to the 11 September attacks on the US.

President Biden has said the American pull-out is justified as US forces have made sure Afghanistan cannot again become a base for foreign jihadists to plot against the West.

media captionThe BBC’s Yogita Limaye travelled to Afghanistan’s Kunduz province, most of which has fallen to the Taliban

Earlier this month, American troops quietly departed from Bagram airfield, a sprawling base that was the centre of US operations in Afghanistan and once held tens of thousands of troops.

Some US intelligence analysts fear the Taliban could seize control of the country within six months, according to an assessment distributed to officials in June

Just a matter of time

Sun Jul 25 , 2021
Support Village Voice News With a Donation of Your Choice. —CMO Parasram on ‘Delta’ Covid variant coming to T&T:  (Trinidad Express) It’s only a matter of time before Trini­dad and Tobago gets its first case of the Delta variant, as it’s more transmissible than the P1 (Brazilian) variant, according to Chief Medical Officer Dr Roshan Parasram. Prime Minister Dr Keith […]