A doctor attached to the Mabaruma Regional Hospital who had refused to treat a sick child last Saturday over a post the boy’s mother made on social media earlier this year has been transferred from the region.

Reports are that the medical professional and his wife, who is also a medical doctor based at the Region One town, have been relocated to the Bartica Regional Hospital in Region Seven. The move came after a single-parent mother broke down in tears last Saturday when the man bluntly refused to treat her seven-year-old son who was vomiting continuously. The woman, Judith Valenzuela, told the Village Voice News on Thursday that she was contacted by the Regional Health Officer, Dr Stephen Cheefoon about the issue.

She said that she was not afraid to vent her frustrations over the treatment she received last weekend as well as last April at the hands of the medical couple, noting that many persons in the area may have been afraid to report any form of dissatisfaction meted out to them by the staff of the hospital. She said she has since lodged a report on the issue with the police.

Valenzuela, who lives at Barabina Hill on the outskirts of the town, said that she went to the Mabaruma Regional Hospital with her son two Saturdays ago for treatment for the lad, when she got the surprise of her life as she encountered the doctor. ”To my surprise I was called into a room just to be asked about a post that I posted in April about how I had been mistreated,” she said.

The woman said the doctor called her into a room and after reminding her about the post, she told him she was not there to discuss anything but rather to ensure her son received medical attention. The male doctor was reportedly angered by a Facebook post the woman made about the treatment she received at the hospital back in April from his wife, who was also a doctor at the hospital.

“He said I am not looking at none of your family because y’all is a set of horrible people and I will not look at you,” the woman alleged, noting that the doctor seemed very revengeful as he spoke. He also called a nurse to bear witness to his tirade.

”This doctor behaved very ignorant in front of my child, “ Valenzuela  said of the incident, noting that the medical official then informed her that she can post Saturday’s incident on Facebook.

She said since no one was willing to attend to her, she began to cry and she then picked up her son and caught a bus and left for a pharmacy at the business community at Kumaka where she purchased several tablets to treat her son.

The woman said her son was visibly traumatised by the incident. “He said mom how I get vex that man was talking up in ur face they does feel hurt when things like this happen,” the woman said.

Following Saturday morning’s incident, residents of the town issued a call for the Ministry of Health to relocate the husband/wife duo from town, some citing the revengeful actions of the male doctor.

A staff member of the hospital told the Village Voice newspaper that the incident was no surprise, noting that the doctor in question had previously refused to treat persons. She said sometime last year, when Mabaruma was experiencing its first cases of the COVID-19 pandemic, an elderly woman was taken to the hospital for treatment. She said the woman had just travelled from Georgetown and after she came off the plane, her relatives took her to the hospital since she was experiencing breathing issues.

After the nurses attended to the woman in the triage area of the hospital, the doctor was called to assess the woman, which he refused to do. The elderly woman was left for more than three hours before he finally attended to her, but before a nurse vented her anger at his refusal to treat the woman. The issue also caught the attention of the Regional authorities at the time. In recent weeks, several patients have complained about the harsh treatment meted out to them by doctors at the Mabaruma Hospital. At least two maternity patients, both of whom suffered miscarriages within the past month, have accused the hospital of being responsible for their losses.

A family tradition of giving back

Mon Jul 19 , 2021
Support Village Voice News With a Donation of Your Choice. …relatives of the late Agatha McKay give back to communities  Some 70 children from several communities in Georgetown have benefitted from donations from the relatives of the late Mildred Agatha McKay who have annually set an example about the importance of giving back. The event was held on July 14, […] 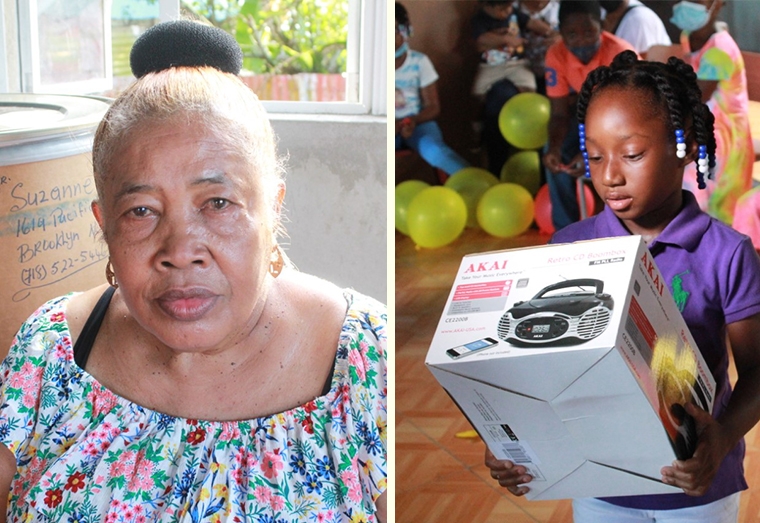