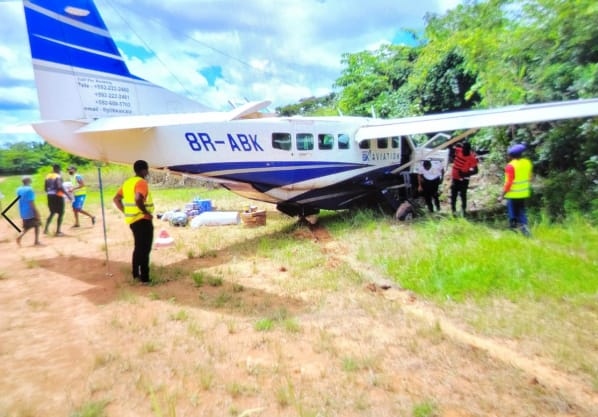 The Aircraft Owners Association of Guyana said on Monday that Minister of Public Works, Juan Edghill may have been misguided and ill-advised in his directive that the operators involved in two recent hinterland aircraft accidents be suspended immediately.

The first accident occurred on July 14 when a Cessna Caravan belonging to Jags Aviation of BK Group of Companies ran off the Eteringbang runway, Region Seven. Mercury was aboard the aircraft. Then, on July 15 a similar incident occurred at the Kamarang airstrip due to the disintegration of a Cessna plane’s propeller upon takeoff. The plane’s private operator is Orlando Charles.

Minister Edghill subsequently tasked the Guyana Civil Aviation Authority (GCAA) with conducting a multi-sectoral approach with assistance from the Guyana Police Force (GPF) due to the presence of mercury aboard the Eteringbang aircraft. He also ordered the immediate suspension of the operators involved.

However, on Monday, the Aircraft Owners Association of Guyana said in a statement that while it expects that the established procedure for aircraft accident investigation will take place and the appropriate action taken, it is shocked by reports that Minister Edghill “ordered that the operators be served with notices of suspension with immediate effect” according to the DPI.

The Association surmised that Edghill was inappropriately advised on the matter in the absence of the Director General, Guyana Civil Aviation Authority (GCAA), Lt. Col. (Ret’d) Egbert Field, who was on leave at the time.

It stated: “The Association has also observed that the Minister is reported as expressing his concern on mercury being carried on board of one of these aircraft stating that ‘the aviation service was not authorized to transport’ this cargo, when, in fact, all the major aircraft operators are certified to carry dangerous goods like mercury, gasoline and diesel, and undergo a rigorous process to be qualified to do so.”

Furthermore, the Association assured that all commercial aircraft operations in Guyana are “rigidly regulated” and held to high standards both in pilot training and qualification and aircraft maintenance in order to obtain an Aircraft Operators Certificate (AOC).

It reminded that Guyana’s aviation industry has the record for one of the highest safety ratings in the Caribbean region, while operating out of the busiest airport in the region and in an extremely challenging and hostile hinterland aviation environment with minimum infrastructural support. It said too that Guyana’s aviation industry has achieved over the last five (5) years the highest level of the International Civil Aviation Organisation (ICAO) national compliance.

However, the Aircraft Owners Association of Guyana outlined that hinterland airstrips remain in need of rehabilitation and development to meet the specific requirements of the aircraft which use them.

It said that frequent rehabilitation of these airstrips in the past had been substandard, carried out by “unqualified and incompetent contractors” in areas such as Eteringbang and Ekereku Bottom. The Association has put forward recommendations to Senior Minister in the Office of the President with responsibility for Finance, Dr. Ashni Singh as well as Minister Edghill regarding rectifying these issues.

“The Association looks forward to meeting with the Minister in regard to our proposals. Again, the Association can only conclude that the Minister was misguided and subject to inappropriate advice. We are committed to working in partnership with our government for a more comprehensive consultative relationship from which a growing and expanding aviation industry would be the major beneficiary,” it stated.

Tue Jul 20 , 2021
Support Village Voice News With a Donation of Your Choice. …urges persons to get vaccinated against Covid-19 The Guyanese born nurse, Patricia Cummings who made headlines after  administering the Covid vaccine to US Vice President, Kamala Harris is back home and has been honoured by the Georgetown Mayor and City Council. The M&CC in a release said that in commemoration […]