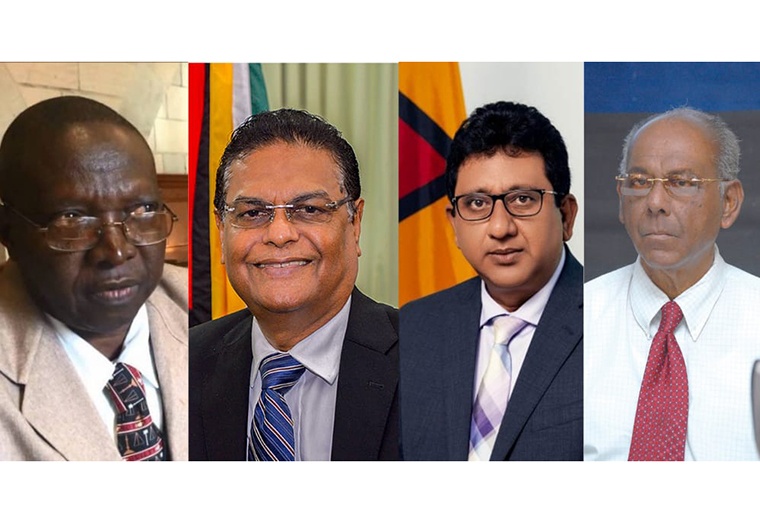 Opposition Members of Parliament (MPs) have objected to the Speaker’s decision to seek advice from Attorney General (AG) and Minister of Legal Affairs, Anil Nandlall on how to proceed with the No Confidence motion submitted against Opposition Leader, Joseph Harmon and two Government Ministers.

However, questioned whether this may present a conflict of interest and whether legal advice should have been sought externally to the Government as some Speakers have done in the past, former Speaker of the National Assembly, Ralph Ramkarran said that it is the Speaker’s prerogative to choose from whom he gets his advice.

I CANNOT ADVISE HIM

In an interview with the Village Voice News on Wednesday, Issacs noted that the letter requesting legal advice was dispatched on Monday, July 12, 2021. He said that no timeline has been given for a response.

Asked the reasoning behind seeking legal advice, Issacs referenced the motion against the Opposition Leader, stating: “The motion has to do with the law. The reason for the removal of the leader of the Opposition is stated in Article 184:3 of the Constitution. It gives ways by which the Leader of the Opposition can be removed but we don’t know if those are the only ways he can be removed or what. If there are other ways by which he can be removed, I’m not a lawyer, I was unable to give the Speaker that kind of legal advice, I cannot. I’m [knowledgeable] in Parliamentary statutes and procedures, not the law.”

As it stands, Opposition MPs are against the Speaker’s decision to seek advice from Nandlall, a member of the Government and the political party which has submitted the motion for Harmon’s removal.

“Imagine the Attorney General who is appointed by the Executive now has to advise the Speaker of the National Assembly on a motion that the Executive filed in the house,” Opposition MP, Ganesh Mahipaul shared on his Facebook page on Tuesday. He likened the decision to sending milk to a cat for approval.
Meanwhile, addressing the advice being sought on the Opposition’s No Confidence motions against two Government Ministers, Opposition MP Sherod Duncan shared online: “The installed PPP Speaker asking the installed PPP Attorney General for advice on two No Confidence Motions against two PPP ministers…maybe it’s time for a No-Confidence Motion against this Speaker.”

In an interview with the Village Voice News on Wednesday, former Speaker of the National Assembly, Ralph Ramkarran shared his opinion.
“It always has been the case that the Parliament went to the AG for advice and that has always been the case historically…on a few occasions, we went outside of the AG to private lawyers and when I was there matters also went to the AG for advice but only the controversial matters. We also continued to go to the AG from time to time while I was there,” he said.

In the past, other former Speakers of the National Assembly such as Barton Scotland decided that the issues which arose from the passage of the No-Confidence motion against the APNU+AFC Government must “cause us to look outside of Parliament for answers”.

Scotland had explained then that since the passage of the No-Confidence motion on December 21, 2018, he received, from diverse sources, information backed by case law and practice from other jurisdictions which had raised doubts as to whether the no-confidence motion was effectively carried.

It led him, approximately 13 days after, to declare that the No-Confidence Motion had been passed but to refer the matter to the Court for “full, final and complete settlement.”

Meanwhile, in 2012 during Raphael Trotman’s tenure as Speaker of the National Assembly, following legal advice received from Attorneys-at-Law, Rex McKay and Stephen Fraser and Ms. Ulele Burnham of the United Kingdom Bar, he decided that he could not bar former PPP/C Minister, Clement Rohee from speaking or fulfilling his ministerial duties.

Before then, he had sought legal advice from lawyers in Guyana and abroad about whether the then President, Donald Ramotar, was constitutionally or legally obliged to adhere to the motion of no confidence passed against Rohee.

However, Ramkarran has said that whether Nadir goes to the AG or externally for advice, it is his choice and, either decision, the politically charged public will have contrasting views.

Thu Jul 15 , 2021
Support Village Voice News With a Donation of Your Choice. …ordered ranks to take jabs or produce negative Covid results The Guyana Defence Force (GDF) has enforced an Order that will take  effect from Monday, July 19, 2021 where all ranks and civilians who are unvaccinated must present a negative COVID-19 test every 14 days at their own expense. Failure […]