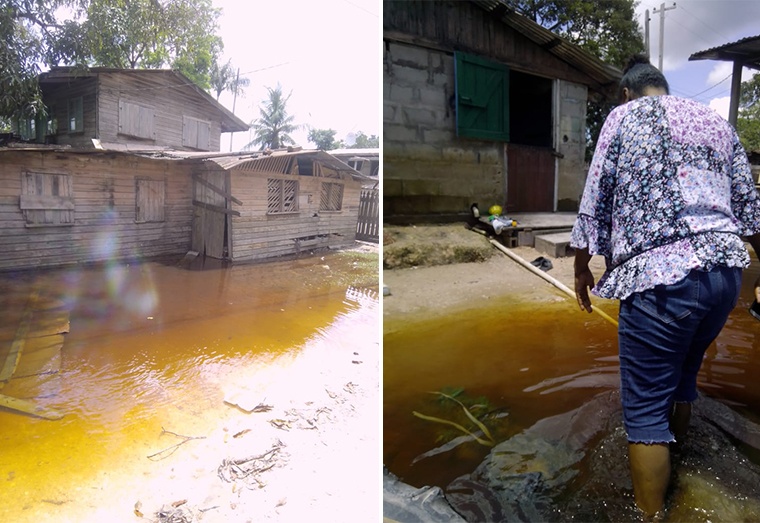 Though the floodwaters in Kwakwani continue to recede many residents remain displaced with hope of returning to normalcy seems a distant dream.

While trying to make the best of her situation, Vergette Rogers told Village Voice News that she is hoping to obtain a higher land from the government. The flood waters have caused damage to Vergette’s house, household appliances and furniture, clothing and car that was also submerged in water.

Rapid rainfall and flooding have directly and indirectly affected over 5000 residents of Kwakwani, located in Upper Berbice, Region 10. The flood water which reached up to 13 feet high in some parts of Kwakwani has caused many families to flee their homes because their properties were either covered by water or almost covered. The community also suffered destruction of crops, loss of livestock, damage to infrastructure, disruption of businesses and even social activities.

Another one of those family that was forced to evacuate their homes is the Saubers. Although the flood did not severely damage their home, Iris Saubers related to this newspaper that her family’s home was broken into and raided after they had evacuated it. “I lose somethings by my house because somebody break in my house, took out my windows and go inside and search up my things and up to now I have not been able to go inside to see what exactly they went away with from there,” Saubers said.

Like most residents in Kwakwani, boat remains the only means of transportation for Kirt Simeon which he finds to be very costly for his family of 12. He explained, “It is very challenging because the water has not receded completely so movements are still restricted. We move from our home with a boat so it costing me a lot of money when the day comes because I have two of my children who are going to school right now and one is doing mock-exams. However, we are just trying to cope with the situation,” Simeon expressed.

Simeon who is a business man in the community noted that business has been disrupted tremendously in Kwakwani.

Meanwhile, Ambra Rogers who has also been displaced for over a month, is highly anticipating returning back to normalcy. “I feeling excited that the water is going down and that everybody could get to go home back soon and clean and get back to our normal routine,” said Ambra who is currently staying at a close family member.

Ambra and her family of five lost appliances, and clothing among other items due to the flood waters which covered their eight feet, one-story home. Ambra added, “Currently, the house rocking a lot because persons are traversing on the water top, and the waves are rocking the house so I will have to get a contractor and find out how it can be fixed”.

Residents of Kwakwani have been receiving assistance from the Central Government, the Civil Defence Commission (CDC), Regional Ten’s Regional Democratic Council (RDC), the Linden Mayor and Town Council, the religious community and the private sector, among others. In an interview with Village Voice News, Regional Councilor based in Kwakwani, Elroy Adolph had related that this is the second highest level the flood-water has ever been at in Kwakwani’s history, with the highest level being recorded in 1948.

Meanwhile, in an update of the flood situation, the Civil Defence Commission said that food waters have significantly receded in several communities allowing for several residents, who were being housed at shelters across the country, to begin returning to their homes.

All of the persons who were being housed at the Tabatinga shelter in Region Nine (Upper Takutu-Upper Essequibo) have returned home, while 69 persons in Region 10 (Upper Demerara-Berbice) have returned to their homes, CDC said in a press release.

As of Friday, 9 July, there are now 184 persons staying in shelters in Regions Two (Pomeroon Supenaam), Region Five (Mahaica-Berbice) and Region Ten. This is a marked reduction of the 257 persons who were being housed in 12 shelters as of July 2.

Of those remaining in the shelters there are 30 persons at the Barama Building in Karawab, Region Two, seven persons at the Mortice Primary HM Building in Region Five, and 147 persons across shelters in Region Ten. There are a total of 91 females and 93 males in those shelters. Water has receded from most of the coastal Regions including Regions One, two, Three, and Four, with no new reports of flooding. However Regional officials in each of the respective regions continue to monitor the situation.

Water has also significantly decreased in Regions Seven and Eight, where most communities are in a safe state. However there still remains significant flooding in Regions Five, Six, and Ten. Though some areas in Region Nine have improved there are some new reports of rising levels in the river.

Mon Jul 12 , 2021
Support Village Voice News With a Donation of Your Choice. By Naomi Marshall  Writer, Suzy Kassem once said, “Fear kills more dreams than failure ever will.” If allowed to, fear can suppress all drive to meeting goals and accomplishing success. Meanwhile, if fear is overcome one is forced to be in control, confident and take risks. Amoniki John is a […]