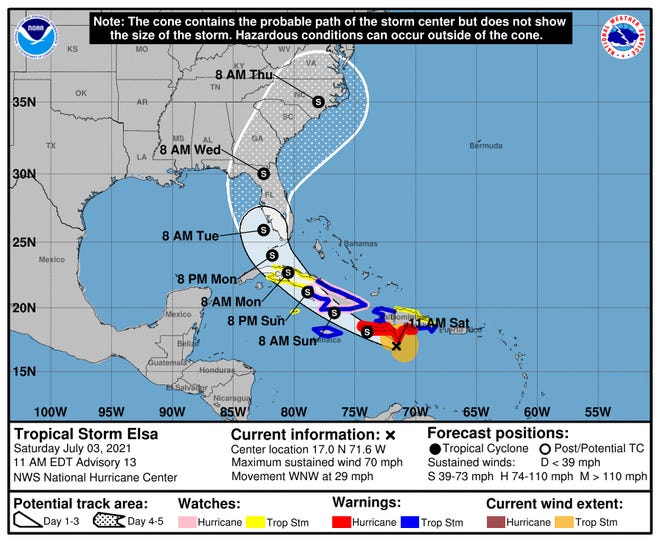 (USA Today) Elsa, the first hurricane of the 2021 Atlantic storm season, was downgraded to a tropical storm Saturday and was on track to impact Florida by early next week.

“We do feel pretty confident that we are going to be experiencing at least a tropical storm that’s going to impact a lot of communities in Florida,” Gov. Ron DeSantis said at a press conference in Surfside early Saturday.

He added: “You’re looking at a track that is going to go, probably, pass over the western portion of Cuba, end up in the Florida Straits and then start impacting Florida with the eye of the storm looking to be, right now, on the west side of Florida.”

Elsa was expected to move near the southwestern peninsula of Haiti Saturday evening, and then near Jamaica and portions of eastern Cuba on Sunday, the National Hurricane Center said. The storm was expected to slow down late Saturday and Sunday and turn northwest Sunday night or Monday.

By Monday, Elsa is expected to head toward the Florida Straits, and, by Tuesday, near or over portions of the west coast of Florida, the National Hurricane Center said.

Sustained winds were about 70 mph, making the tropical storm almost a Category 1 hurricane, according to the National Hurricane Center. Elsa was located 130 miles southwest of Port Au Prince, Haiti, moving west-northwest at 28 mph.

expected, was in effect for the Florida Keys from Craig Key westward to the Dry Tortugas.

Storm conditions are expected to spread northward along the peninsula through Wednesday and reach the coasts of Georgia and the Carolinas Wednesday and Thursday.

“However uncertainty in the forecast remains larger than usual due to Elsa’s potential interaction with the islands of Hispaniola and Cuba,” the National Hurricane Center said. “Interests in Florida and along the southeast U.S. coast should monitor Elsa’s progress and updates to the forecast.”

The impending storm prompted Florida officials on Saturday to abruptly move up plans to demolish the remaining part of a Miami area that condo collapsed last week, as the threat of a secondary collapse of the damaged structure looms, potentially endangering rescue crews.

Robert Molleda, warning coordination meteorologist with the National Weather Service in Miami, said conditions may worsen as early as Monday afternoon in South Florida, including frequent rain bands and gusty winds. The conditions could continue through Tuesday.

“But remember, any slight shift to the east would mean that we would get worse conditions here,” Molleda said. “We can’t let our guard down.”

Elsa became the earliest E storm on record, beating out Edouard, which formed July 6, 2020. Elsa was the fifth named storm of the season in the Atlantic.

Sun Jul 4 , 2021
Support Village Voice News With a Donation of Your Choice. PORT OF SPAIN, Trinidad, CMC – The outgoing chairman of CARICOM, Prime Minister Dr Keith Rowley has informed said that the 15-member regional integration grouping will receive at least 800,000 does of vaccines to help curb the spread of the coronavirus (COVID-19-19) from the African Union later this month. In addition, […]