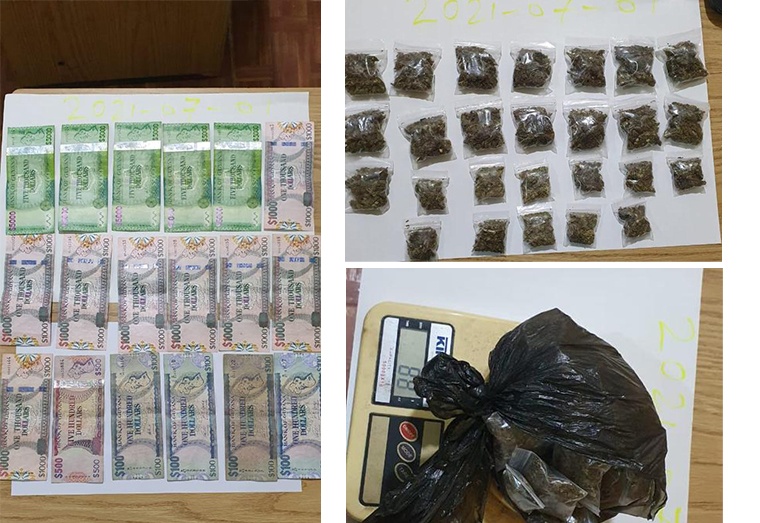 …says can’t go to jail and leave daughter behind

A 25-year-old man of Linden is being accused of narcotics trafficking and also attempt to pervert the course of justice, police have said.

In a press release police said on Thursday a party of policemen were conducting raids in Wismar Linden when they went to the suspect’s premises to conduct same.

A search conducted was in his bedroom and a black bulky plastic bag was found tucked under his bed. Same was opened in his presence and it contained 26 transparent ziploc bags that contained leaves, seeds and stems suspected to be cannabis.

He was told of the allegation,  cautioned and he said “offica is just a couple bag weed”.

He was arrested and escorted to the McKenzie Police Station where the suspected cannabis was weighed and it amounted to 88grams.

Police added that at the station, while this process was being completed, the suspect took out $33,900 from his pants pocket and handed it to the sergeant and told him to take the money to finish the matter because “he can’t leave his four year old daughter and go jail.”

He was told of the offence of perverting the course of justice, cautioned and he said “Sir, is just a chance I want fuh this weed, I gat a four year old girl child and I really sorry fuh pass the money”.

The money was lodged and the suspect was placed into custody pending investigation and charges.

Fri Jul 2 , 2021
Support Village Voice News With a Donation of Your Choice. …slams government’s response to flood disaster   Former President David Granger on Friday took the PPP administration to task over what he described as its mismanagement of the seven-week-long flood disaster which has been ravaging the country since 26th April. During his weekly recording of ‘The Public Interest,’ the Former […]