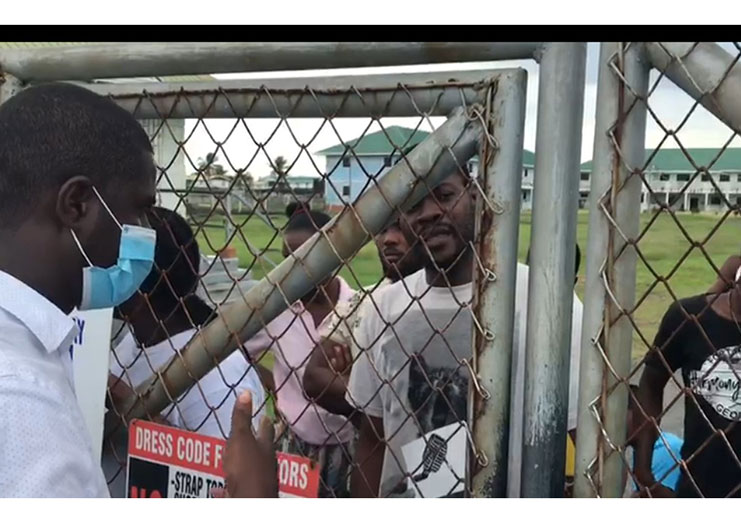 Antigua and Barbuda’s Ambassador to the United States and the Organisation of American States (OAS), Sir Ronald Sanders, said the decision by Guyana Government to impose visa requirements for Haitians, seeking to enter Guyana, is a necessary step in the international effort to curb Human Trafficking. But former President David Granger, in objecting to the imposition, said Haitians are not treated fairly when compared to Venezuelans and Cubans.

In an interview with Village Voice Newspaper, Guyanese-born Sir Ronald, said Haiti’s poverty and its current political turmoil, economic instability and disregard for the Rule of Law have increased violence, including murder, kidnapping and rape and have contributed to the creation of a Human Trafficking Industry.

“The people, who are benefiting from Human Trafficking out of Haiti, are a small elite in Haiti working in cahoots with people of a criminal nature in other countries in the Caribbean and wider

afield,” Sir Ronald told Village Voice Newspaper, while noting that Guyana is not the only CARICOM country affected by the trafficking of Haitians.

He said while Guyana has formally imposed a visa requirement by way of an order, other CARICOM nations have also done so, some administratively. “They have simply told their border authorities to carefully check Haitians seeking to enter their countries, and to deny entry to persons who cannot establish that their business is legitimate,” Sir Ronald explained.

Ambassador Sanders pointed out that, for the same reason of human trafficking, Barbados re-imposed visa requirements for Haitians in July 2019. “So, Guyana, in re-imposing a visa requirement for Haitians, is doing the right thing because it is the only way that the border patrols would be able to establish if a Haitian who turns up at the border is seeking to enter the country legitimately or is a victim of human trafficking,” Sir Ronald said.

He added: “Human Trafficking is an international crime and any State that participates in human trafficking, either knowingly or unknowingly, is contributing to criminality. In these circumstances, Guyana is not doing anything that has not happened in other CARICOM countries except that Guyana is amongst those that have done it formally but for good reason.”

The Ambassador said many hapless Haitians, who are being transited through Guyana, become sex slaves, particularly women and girls, while others are made to work on plantations under poor conditions. “… a stand has to be made against it and Guyana has made the right step,” Sir Ronald said.

The Attorney General and Minister of Legal Affairs, Anil Nandlall, who initially made the announcement, said in addition to Haitians, visa-requirement will be imposed on Cubans and other nationals.

Sir Ronald said while the social and economic conditions in Cuba differ when compared to Haiti, Cubans have been migrating to other countries including Guyana. He said nonetheless, Human Trafficking remains a concern.

“Human Trafficking ring is being run by a small elite of people, who are profiting from criminality. Guyana cannot allow itself to be a country where it has come to the authorities’ attention that this is happening and do nothing about it,” he posited.

But former President Granger, who had issued the 2019 Immigration Order, said while Human Trafficking is of concern in a country such as Guyana with porous borders, Haitians are not treated fairly when compared to Venezuelans and Cubans. Though not ruling out Human Trafficking, the former Head of State said Guyana is currently confronted by an “immigration issue” that could be easily addressed through “humane policies.”

“We were built by migrants and migration is not necessarily a bad thing. So the policy this Government is following is giving the impression that there is a problem with Haitians, the same measures are not being applied to Cubans or Venezuelans. Haitians perhaps are the best qualified to enter the country without visas but now a wall, a diplomatic wall, a paper wall, a legal wall has

been put up to keep the Haitians out,” Granger said during his weekly ‘Public Interest Show’ on Friday.

Granger, who is the Leader of the People’s National Congress/Reform (PNC/R), said it is baffling that the people who are connected to Guyana through CARICOM are the ones who are being marginalised, ostracised and even criminalised while the Venezuelans and Cubans are being welcomed.

“I think people are judging the Haitians falsely and many of them don’t want to stay here, they want to go to a French Speaking country,” Granger said.

He posited that the number of Haitians in Guyana is significantly small when compared to Venezuelans in the country. According to the Hebrew Immigrant Aid Society (HIAS), there are approximately 22,000 Venezuelans — more than half of them women –living in Guyana.

He expressed disappointment that Haiti, a CARICOM nation, is facing greater travel restriction while “the door is opened to the Venezuelans.”

“They [Venezuelans] are being treated with kid gloves and the Haitians who are not involved in criminal activities are being criminalized,” Granger opined, while pointing out that thousands of

Cubans also travel to Guyana. He said there was no reason for the People’s Progressive Party/Civic (PPP/C) Administration to take such strong action against Haitians.

The PNC/R Leader made a call for the Government to implement policies that are “humane.” “Let us deal with the issues, and not simply change the law because you don’t like the people,” Granger urged.

Political Analyst and former Minister of Foreign Trade, Dr. Henry Jeffrey, while denouncing Human Trafficking, said any decision by the PPP/C Government on Haitians may come into question given its initial position.

While in Opposition, the PPP/C alleged that Haitians were being “smuggled” into Guyana to pad the Electoral List.

“Trafficking in Person cannot be allowed but at the same time the PPP’s motive will be suspect because [of what] they had said before,” Dr. Jeffrey said while adding that the PPP/C has been very untoward to Haitians.

Last November, approximately 26 Haitians were placed in “protective custody” at the Hugo Chavez Centre for Rehabilitation and Reintegration at Onverwagt, Region Five. Two months after, in January, 2021, Chief Justice (ag) Roxane George quashed the deportation orders which were granted by the Magistrates’ Court against the Haitians on the grounds that there was a breach of natural justice.

Dr. Jeffrey said Government should have consulted with its CARICOM partners before imposing the restriction.

But the Attorney General said the Government consulted with Suriname, Cuba, the US Embassy, the United Nations Human Rights Council (UNHRC), and the International Criminal Police Organisation (INTERPOL) before issuing the order. “The Government of Guyana made a decision, and this decision was not made lightly; this decision took months before it was made; careful analysis was put into it. We had engagements with our neighbouring countries. Brazil expressed a great concern that Guyana is being used as a transshipment point to unleash aliens into that country; Suriname has had discussions with us along the same lines,” Nandlall explained during a virtual programme.

He said the evidence suggests that a large percentage of the 38,187 Haitians are girls and women, some of whom were pregnant. “From all the evidence, and we have accumulated evidence over a protracted period of time, there is a highly organized operation that has all the trappings of an organized ring that deal with these Haitians. From the time they leave the departure lounge of the Cheddi Jagan International Airport, they are whisked away into waiting vehicles,” the Attorney General said.

He added that they are taken to various parts of the country and held hostage while their money and documents are taken away. The Attorney General said such was the case on June 17, 2021 when 10 Haitians – five males and five females – were found in Swiss Hotel, Skeldon in Corentyne.

At the time, the Haitians did not possess any passports or any form of identification. Investigation has thus far revealed that they traveled to Guyana from Suriname via a speedboat on June 14 and were left at the hotel since then. “It has long been suspected that there is a huge trafficking in persons and human smuggling ring, including children, taking place in the Region and Guyana is being used as a transit point in this racket, which includes Cubans, Nigerians and Haitians, among others. This is the latest manifestation of this nefarious racket at work which seems to be operating on a daily basis,” the Attorney General had said in a statement on June 17.

Nandlall pointed out that Trinidad and Tobago, Barbados, The Bahamas, Jamaica, Antigua, St Lucia, Belize, St. Kitts and Nevis and Dominica have all imposed visa requirement on Haitians.

Sun Jun 27 , 2021
Support Village Voice News With a Donation of Your Choice. By Svetlana Marshall and Alva Solomon Three men were killed on Saturday afternoon following an explosion onboard a fuel boat in the Demerara River while docked at a wharf on the East Bank of Demerara in the vicinity of Friendship. The men have been identified as Damian Dias , 29 […]