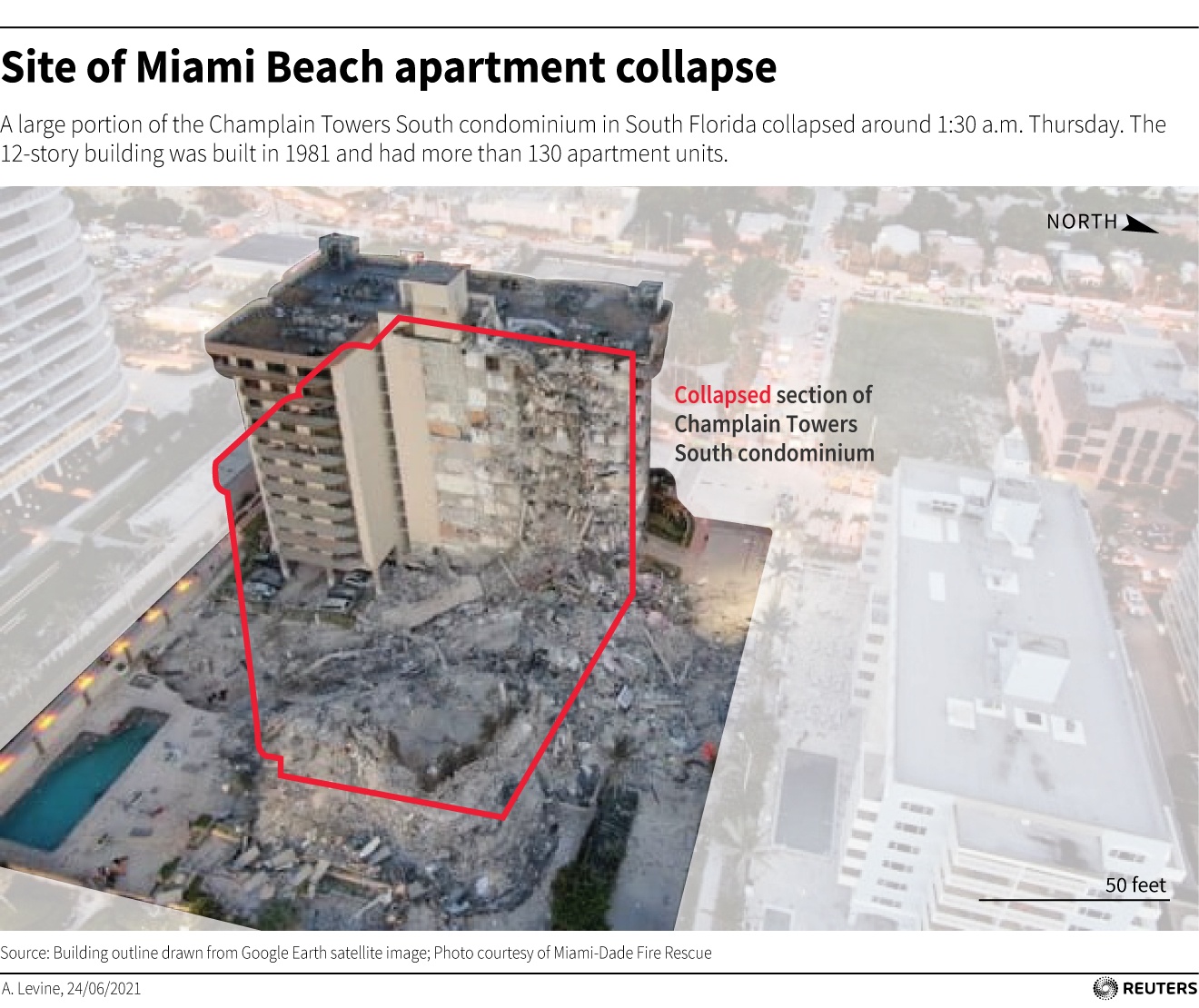 SURFSIDE, Fla. (Reuters) – The search for more than 150 missing residents of a Florida building that collapsed two days ago grew increasingly desperate on Saturday, as a smoldering fire hampered rescue efforts and officials said they have not located any signs of life in the mountain of debris.

A newly released 2018 report showed that an engineer found evidence of major structural damage beneath the pool deck and “concrete deterioration” in the underground parking garage of the 12-story condominium, three years before it collapsed without warning on Thursday as most residents slept.

Despite around-the-clock work at the site in Surfside, a shore town near Miami, search-and-rescue teams had not found any additional survivors as of Saturday morning, Miami-Dade Mayor Danielle Levine Cava told a news briefing. The official death toll remained at four, though that number is certain to rise.

Officials said they still harbored hope that some of the 159 people still unaccounted for might be found alive but acknowledged that a fire somewhere beneath the rubble was slowing rescue teams, filling the area with smoke and frustrating firefighters’ efforts to locate the source.

At midday, acrid smoke billowed from a second-story balcony in the portion of the building still standing, as rescue workers hosed down the rubble to manage the dust.

Aided by dogs, infrared scanning and heavy equipment, rescuers held out hope that air pockets that may have formed in the debris might be keeping possible survivors alive.

The engineer’s 2018 report, released by town officials, was produced for the condominium board in preparation for a major repair project set to get underway this year.

It was not immediately clear whether the damage described in the report was in any way connected with the building’s collapse around 1:30 a.m. ET (0530 GMT) on Thursday.

Levine Cava said officials had not been aware of the report. Vice mayor Tina Paul called the structural issue described in the document “very alarming” in an email on Saturday morning.

The engineer, Frank Morabito, warned that the waterproofing installed below the pool deck had failed due to a major error in design.

In addition, Morabito said concrete columns, beams and walls in the garage were showing “abundant cracking,” including areas underneath the pool with “exposed, deteriorating rebar.” Morabito could not be reached for comment on Friday evening.

Morabito’s firm submitted an 84-page document to the town in April detailed a “40-year building repair and restoration” plan for the Champlain Towers South condominium, which was built in 1981.

The condominium was preparing to go through recertification this year, a safety requirement for buildings that reach 40 years of age in Florida.

The mayor said the county will audit all buildings more than 40 years old within the next 30 days to ensure they have all been recertified. Governor Ron DeSantis said officials were weighing whether to evacuate the condominium’s sister building, which was constructed at the same time by the same developer.

Satellite data from the 1990s showed the building was sinking between 1 and 3 millimeters per year, while surrounding buildings were stable, according to Florida International University professor Shimon Wdowinski.

He said the data could suggest a structural compromise within the building, though it could also have signaled the building was settling into the soil.

While local officials provided aid and comfort to the families, such as hotel rooms and food, search-and-rescue specialists worked the disaster site on a rotation, with a limited number allowed at any one time to prevent further collapse.

Teams from Mexico and Israel arrived to help relieve the locally based crews, many of whom have also traveled to disaster sites around the world.

The disaster occurred early on Thursday morning, when a large section of the 40-year-old building crumbled to the ground.

Video captured by a security camera showed an entire side of the building suddenly folding in two sections, one after the other, throwing up clouds of dust. The building had more than 130 units, about 80 of which were occupied, officials said. Roughly half appear to have collapsed.

Sun Jun 27 , 2021
Support Village Voice News With a Donation of Your Choice. BBC – Matt Hancock has resigned as health secretary after he breached social distancing guidance by kissing a colleague. In a letter to the PM he said the government “owe it to people who have sacrificed so much in this pandemic to be honest when we have let them down”. […]