The first lady is an unofficial title assigned to the female spouse of the head of government, be that person Premier/Prime Minister or President. As unofficial as the title is so is the role, though in some countries-and recently in Guyana, starting from first lady Varshnie Jagdeo- there is a public office and state allocation of funding to manage the office.

The first lady plays a serious role in society. She is expected to be a class act and considered-irrespective of age- the embodiment of discipline, decency, deportment, respectability and setting good examples, particularly for little girls and boys and women. She is a role model.

Ms. Varshine Singh, the spouse of President Bharrat Jagdeo, adopted the role of helping sick children get access to medical treatment, local and overseas. Society subsequently learnt, from her, this noble cause faced challenges from her spouse who apparently placed roadblocks in the way.

Mrs. Deolatchmee Ramotar, the wife of President Donald Ramotar, sought to emulate the role of United States ((U.S) first lady Michelle Obama in taking up gardening. Like Mrs. Obama, Mrs. Ramotar planted a garden on the lawns of the State House (in the U.S it’s the White House) with the support of school children to promote healthy eating as integral to healthy lifestyle and greater ability to concentrate and learn.

Mrs. Sandra Granger, the wife of President David Granger, pursued youth education (particularly in STEM) and the empowering of vulnerable women (teenage mothers and the incarcerated). Mrs. Granger pushed programmes of second chance and for the incarcerated, a seamless reintegration into society.

Mrs. Arya Ali, the wife of President Irfaan Ali, is still to establish clearly what impact she is seeking to make. What would define her role- is it beautification of the environment, giving out sanitary napkins to female students of puberty age, advocating for persons with disabilities, or be seen as a carefree, partying young woman who doesn’t care how she presents herself in the public eye?

Mrs. Ali, like some of her predecessors- Mrs. Burnham, Mrs. Jagan and Ms. Singh- began their stint as first lady at relatively youthful age. But youth is not without consequences, recognition and appreciation of acceptable and unacceptable behaviours; of being aware of time and place, and action(s) befitting the individual, occasion, role or event.

A few Saturdays ago, at a fundraising boat cruise event, the first lady was caught on camera dancing in a manner society would not associate with her office. It was gyrations that mirrored pole dancing sans the pole. The first lady was bare feet, lifting one leg high, wining/twirling around, with one hand in the air. Her performance was suggestive of someone enjoying herself and probably under the influence of drinks. She seemed to have lost all inhibitions, all control, all recognition and awareness of her environment.

Mrs. Ali is not a dance hall artiste/queen and no longer an ordinary woman. She is the wife of the president and first lady in whom all standards are expected. She is expected to be a role model. Contrary to a belief that her action represents women’s liberation or feminism, women’s fight for equality, equity, empowerment and right to make choices over their bodies does not support falling into the trap of justifying actions that would compromise or undermine their progress in society or belittle them in the eyes of the public.

Traditional and universally accepted standards of behaviours are being eroded in Guyana. The first lady is amongst the least of those society expects to see in any unbecoming behaviour. The dance was not representative of a first lady’s public behaviour. Whilst the dance demonstrated Mrs. Ali has moves, it would be more acceptable in the bedroom away from the public eye. Any woman can get away being a ‘bad woman’ for her mate in private.

Mon May 23 , 2022
Support Village Voice News With a Donation of Your Choice. Five youths were awarded on Friday with cash grants from the International Decade for People of African Descent Assembly -Guyana (IDPADA-G) to invest in their businesses. Clinton Samuels of COBBEC Vision received $500,000; Earlecia Hieronymo of Khayr Organics -$250,000; Brian Smith of Dragonfly Geospatial Aerial Productions – $150,000; Jermaine Hall […] 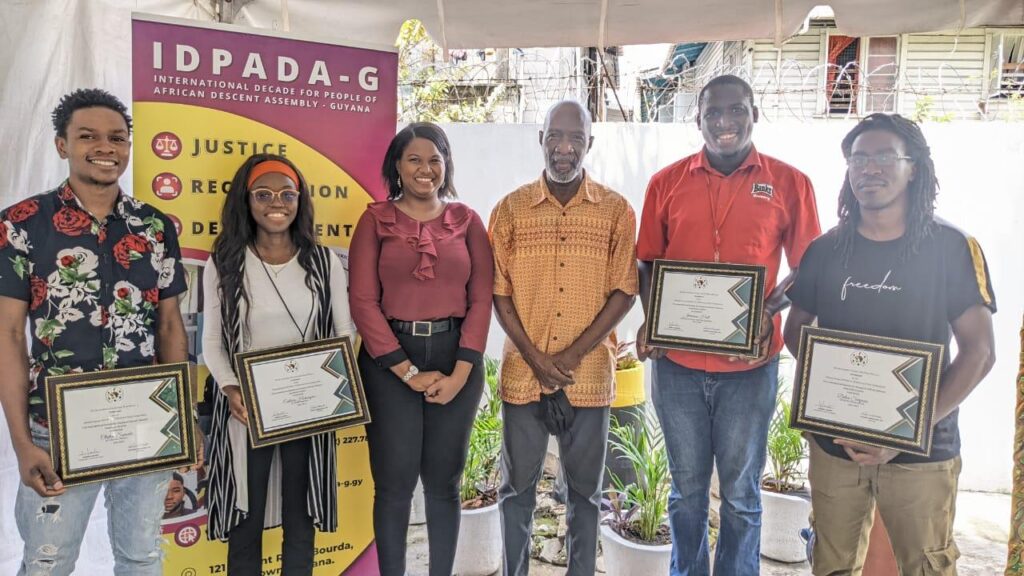