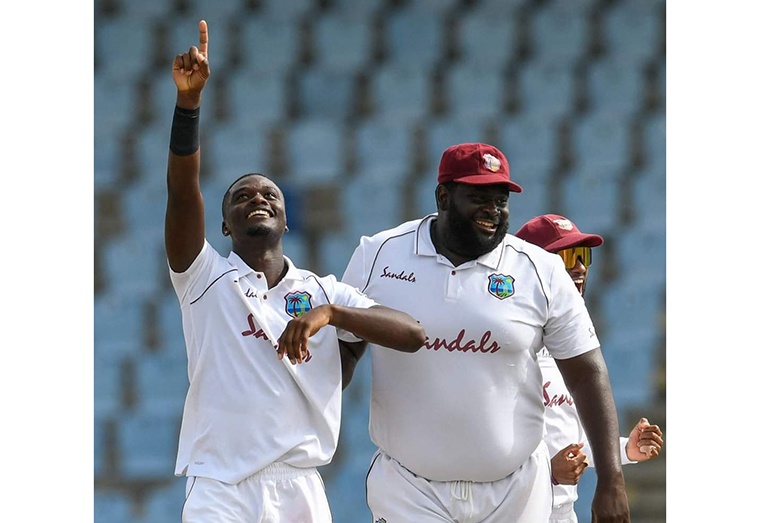 On a day dominated by the fast bowlers with 14 wickets falling, it was the visitors from South Africa who ended in the ascendancy as they bowled out the West Indies for 97 and took an early first innings lead of 31 runs. Pacer Lungi Ngidi’s second five-wicket haul (13.5-7-19-5) and Anrich Nortje (11-3-35-4) were the chief wicket-takers, after the West Indies won the toss and elected to bat first.

South Africa’s early first innings reply so far of 128-4 has been led by opener Aiden Markham (60) and Rassie Van Der Dussen (34 not out). West Indies 19-year-old debutant Jayden Seales stepped up with the ball and had an impressive first day at the highest level with figures of (11-3-34-3).
He bowled with pace and accuracy and was clearly delighted when he got his first wicket in his first over – Keegan Peterson caught by Jason Holder at second slip from a thick edge. Seales would get two more before the close – Aiden Markram and Kyle Verreyne both edging into the safe gloves of keeper Joshua Da Silva.
In the opening session captain Kraigg Braithwaite and the recalled opener Shai Hope looked solid and saw off the opening 10-over spell by Kagiso Rabada and Ngidi. But the introduction of Nortje resulted in him dismissing both batsmen clean bowled and hitting Nkrumah Bonner on the helmet first delivery, in a hostile spell.

Bonner after being dismissed by Rabada had a medical examination and was diagnosed as having a concussion. ICC Match Referee Sir Richie Richardson approved West Indies request for Kieran Powell to come into the match as a concussion substitute.

As the West Indies went to lunch on 48-4, after the interval they collapsed with only last man out Jason Holder (20) showing resistance.

In reply, Kemar Roach started around the wicket to left-hander South African Dean Elgar immediately struck in the first over when the South African skipper was magnificently caught at third slip by Jermaine Blackwood.

The match continues on Friday. First ball is 10am (9am Jamaica Time).

Fri Jun 11 , 2021
Support Village Voice News With a Donation of Your Choice. (BBC SPORT) Euro 2020 gets under way on Friday – and what was already going to be a unique tournament will be notable for several other reasons too. The competition keeps its name even though it was delayed for a year because of the Covid-19 pandemic. It will now run […]