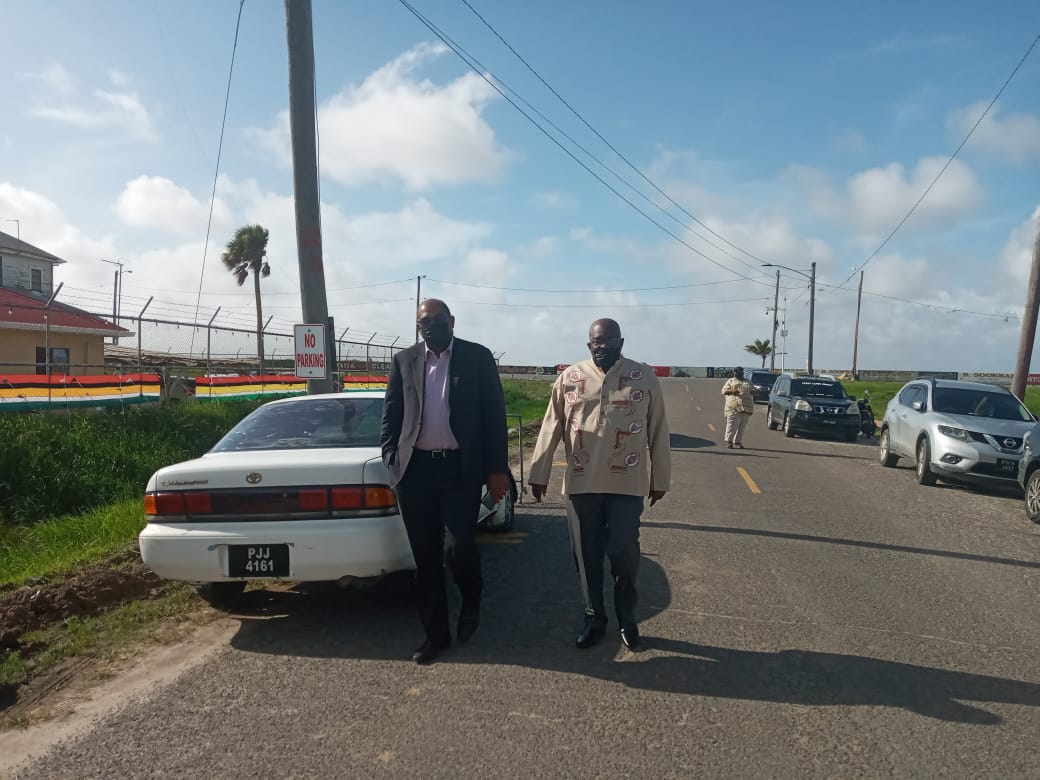 Nigel Hughes – the Attorney-at-Law representing the Chief Elections Officer (CEO), Keith Lowenfield; the Deputy CEO, Roxanne Myers; and the Region Four Returning Officer (RO), Clairmont Mingo – said he was informed of Wednesday’s court hearing eight (8) minutes before the case was called, though he had repeatedly enquired about the court date and time.

It was reported in the press that the three senior Election Officials were a no show when their case was called on Wednesday in the Georgetown Magistrates’ Court before Her Worship Sherdel Isaacs.

In a bid to set the record straight, Hughes, in a statement, disclosed that at 10:52hrs on Wednesday, he received a call from Senior Superintendent Mitchell Caesar requesting that Lowenfield, Myers and Mingo attend court at 11:00hrs, though hours prior he had enquired about the court date and time, and was told that no date was set.

Hughes explained that based on an invitation issued by Senior Superintendent Caesar, both Lowenfield and Myers reported to CID Headquarters, Eve Leary on Tuesday June 8, 2021 at 15:30hrs.

“In keeping with the request both Mr. Lowenfield and Ms Myers attended the CID HQ at 3.30 PM where there were informed in a video recorded interview of the intention of the Guyana Police Force to file two criminal charges of conspiracy to defraud the electors of Guyana between March 2nd 202 and August 2nd 2020,” Hughes detailed.

He said at the conclusion of the video recorded interviews, he specifically inquired of the Senior Superintendent when Lowenfield and Myers would be required to attend court. “…Mr. Caesar indicated that he would contact Mr. Hughes to inform him of the date and time as the charges had not yet been filed,” the Attorney recalled.

He said it was then that Caesar requested the presence of Mingo. As required, Mingo reported to the CID Headquarters on Wednesday, June 9, 2021 at 8:15hrs, and during a video recorded interview he was informed of the Guyana Police Force’s intention to institute two charges against him for allegedly conspiring with Lowenfield, Myers, Volda Lawrence, Carol Joseph and others to defraud the electors of Guyana in the 2020 General and Regional Elections.

Following Mingo’s interview, Hughes again enquired of the officers when Mingo would be required to attend Court. The police indicated that they were unable to say as the charges had not yet been filed.

“At 10.52 AM Mr. Caesar called Nigel Hughes and asked that all three persons attend court at 11.00 AM. Mr. Hughes informed Mr. Caesar that it would be impossible as Mr. Mingo was on his way back to West Coast Berbice and it may be difficult to attend court in eight minutes. He further indicated to Mr. Caeaar that he would have to contact Mr. Lowenfield and Ms. Myers to inform them of the requirement to attend court in eight minutes which at point it would be impossible in Georgetown,” Hughes recalled.

He said upon being notified of the court case, Mingo immediately made his way back to Georgetown.

At 10:55hrs, Caesar called Hughes again, this time informing him that the matter had been fixed for 12.00 noon.

“At 11.45 Mr. Mingo and Mr. Lowenfield were standing outside of Georgetown Magistrate’s Court 3 awaiting the 12.00 hearing when the court prosecutor informed Mr. Hughes that the matter was called at 11.00 AM and was adjourned to the 29th June 2021 as there was no evidence that the defendants had been informed. He indicated that the Magistrate has ordered that a summons be issued to the defendants,” Hughes detailed.

It was indicated to the Prosecutor in the presence of another Senior Police Officer that the request to attend court was received at 10:52hrs.

Myers had also attended the Georgetown Magistrate’s Court 3 at 11:50hrs. “The only notification to attend court at 11.00 AM was issued by way of a telephone call at 10.52 AM to Counsel for Mr. Lowenfield, Ms Myers and Mr. Mingo,” Hughes maintained

Government must do better in fight against Covid-19

Fri Jun 11 , 2021
Support Village Voice News With a Donation of Your Choice. A government of the people never gives up on the people. Minister of Health Dr. Frank Anthony’s statement that “as our case fatality is at 2.3%, or put another way, for every 100 persons infected with the virus, two would lose their lives” sounding a death knell when it should […]