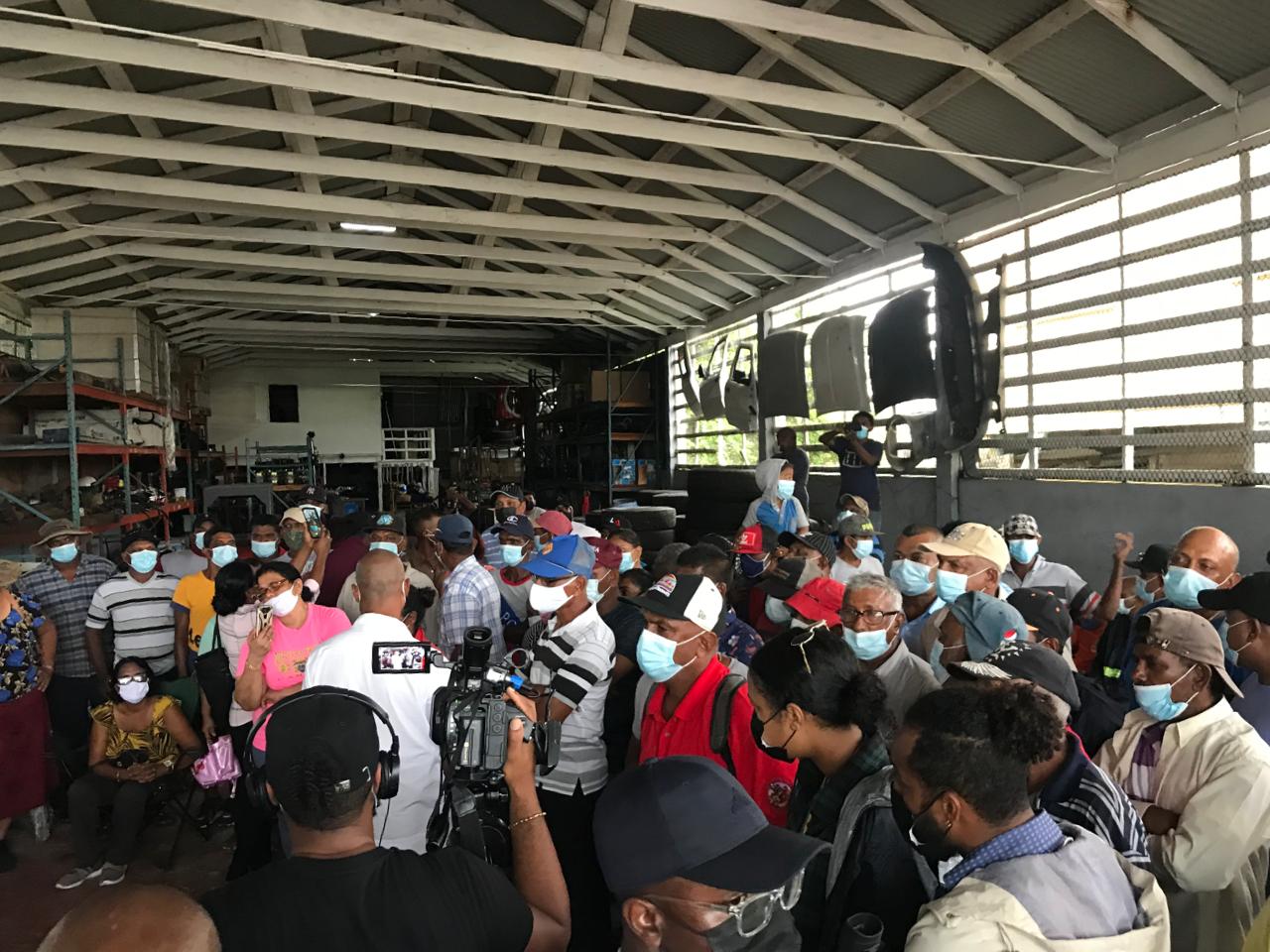 Residents across Guyana have been severely affected by the current flooding situation that is now considered a level 2 disaster and Berbicians on Wednesday called on President Irfaan Ali to deploy pumps in the area to drain the water and also send them food items.
President Irfaan Ali, visited several communities on the Corentyne where he met with flood -affected residents and pledged to ensure the necessary assistance is given and interventions are being made accordingly in coordination with the Regional Democratic Council. He was accompanied by two members of the cabinet,  Zulfikar Mustapha- Minister of Agriculture, Nigel Dharamlall- Minister of Local Government and Regional Development along with the Regional Chairman, David Armogan, Regional Executive Officer, Narindra Persaud and Head of the Civil Defence Commission, Lieutenant

Kester Criagg.
Several concerns were raised by the residents, some of which the President along with his team was able to resolve the same day. Among those concerns are the need for household support, livestock/poultry support, sanitizing agents and most importantly- immediate drainage assistance.
Many of the residents requested additional pumps and machines to be deployed into their village so as to have the excess water drained from the residential lands. A resident of Fyrish Village noted that the water continues to rise and it is a threat to not only their crops and livestock, but themselves given the fact that water- borne diseases are more prone during these times.

“We are asking for additional pumps to take out some of the pressure of the water from our community to go in the sea and I had asked about a hymac to be put in place to dig the drains and allow the free flow of water for the benefits of the citizen in here.”
The residents also requested for tubing to be placed at specific areas so as to ease the burden they are faced with on a daily basis as the flood water continues to rise. In majority of the communities, the resident’s main issue was related to the poor drainage system which they noted is one of the contributing factors to the continued flooding.

Addressing this issue, President Ali noted that the states does not have sufficient pumps to be deployed all across Guyana but he committed to ensuring a hymac be placed in the Fyrish Village as early as Thursday and begin work within the community. He also instructed the Regional team to have machines mobilised into the various communities so as to begin cleaning and clearing the trenches and canals that are clogged.
On the other hand, he explained to the residents that the flooding is not only as a result of the rainfall but rather the water that is in the backlands which has been draining into residential areas. Nevertheless, he assured the residents, more so the farmers, that their plight will not go in vain but will be taken with the best of interest and whatever support is needed from the government will be given.
“The volume of water in the backland and across our country is just enormous. One of the things that we have to understand is that if the rain stops today and the pump continues to work; the water will keep coming for some time because of the volume of water that’s in the backland. When the water recedes, the CDC, the RDC and ministry of agriculture will have a full assessment of the damages and then we will have another intervention.”

Sanitisers
As it relates to the sanitising agents, a team from the Regional Health Department has begun the distribution of medications meanwhile the CDC will be distributing water purification pills and more to ensure the residents have clean water and access to the necessary resources needed during this time.
President Ali noted that the government is working on a supplementary provision to take to parliament so as to have additional resources that will support the efforts they are making as it relates to providing flood relief to every affected citizen.
Meanwhile, Kester Craig, Head of the Civil Defence Commission said that the CDC will work together with every resident to ensure they stay safe and protected. He noted that while resources are limited, they are prioritising the resources to those who have been severely affected.
“We will be working closely with the Ministry of Health to ensure there are health and care packages distributed to residents because we know that with the water level right now, there is a strong possibility of water accumulation and the likelihood of water borne diseases so we have to take all efforts to reduce these issues”
Apart from the medical and sanitizing supplies, the CDC continues their support as they ensure residents have access to food, clothing and shelter during this time.

Thu Jun 10 , 2021
Support Village Voice News With a Donation of Your Choice. …relatives demand justice  Relatives of a 22-year old man, who was shot in the thigh by a security guard with an assault rifle  outside a Diamond Housing Scheme supermarket on Wednesday night, are calling for the police to investigate the incident. Injured is Flavian James. The young man was shot […]