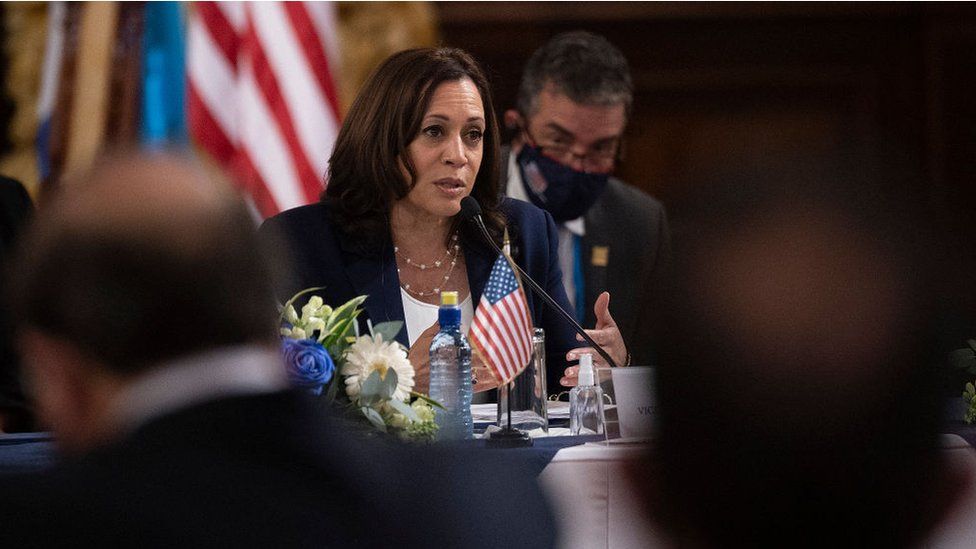 ( BBC) US Vice President Kamala Harris has urged would-be migrants in Guatemala not to try to enter the United States illegally.

Speaking on her first overseas trip since taking office, she said the journey north was dangerous and would mainly benefit people smugglers.

Ms Harris warned people they would be turned back at the border.

She has been tasked by President Joe Biden with controlling a surge in migration at the southern border.

Ms Harris has described her task as finding solutions to tackle the root causes of the border crisis, including corruption and the lack of economic opportunities. Her staff say this first visit is primarily an information-gathering trip.

In a news conference alongside Guatemalan President Alejandro Giammattei, she warned against illegal migration to the US, saying: “Do not come. Do not come. The United States will continue to enforce our laws and secure our borders.”

She added: “If you come to our border, you will be turned back.”

Ms Harris said she wanted the US and Guatemala to “work together” to find solutions to “long-standing problems”.

She said people must be given a “sense of hope that help is on the way”.

President Giammattei defended his government’s own record of fighting corruption and said the fight against drug trafficking should be an key part of tackling the issue.

He announced a new processing centre for migrants who had been sent back from the US and Mexico and said that the focus for both countries should be on creating prosperity.

Ms Harris said the US would send 500,000 coronavirus vaccines to Guatemala and provide $26m (£18.3m) to fight the pandemic there. The region has been hard hit by the virus, further worsening living conditions.

She also met civil society leaders and entrepreneurs in the country before travelling on to Mexico where she will hold talks with President Andrés Manuel López Obrador on Tuesday.

President Biden has been criticised by Republicans who accuse him of ignoring the crisis on the southern border.

But in a recent speech to Congress, he said: “When I was vice president, I focused on providing the help needed to address these root causes of migration. It helped keep people in their own countries instead of being forced to leave. Our plan worked.”

Tue Jun 8 , 2021
Support Village Voice News With a Donation of Your Choice. Dear Editor, During the past week, I became aware of two teenagers whose lives were cut short by suicide.  I also learned that there were two adults’ suicide cases prior to and within the last week.   While I am unaware of what the triggers were for a permanent end […]