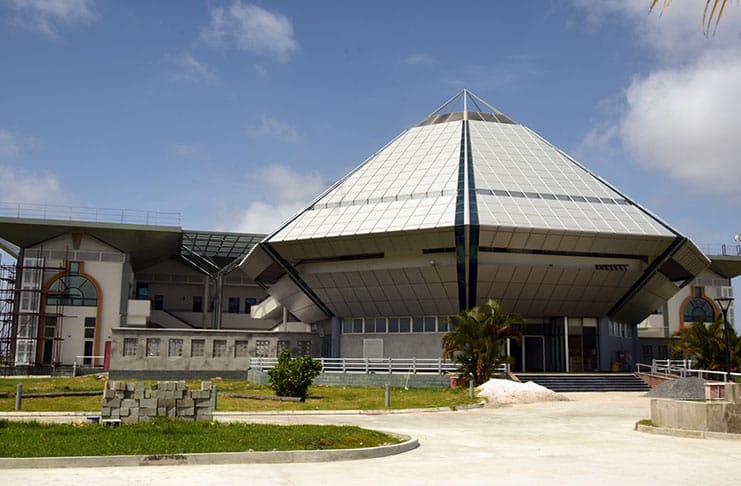 After a three months ‘hiatus,’ the 65-Member National Assembly will convene on Thursday, June 10 at the Arthur Chung Conference Center (ACCC) under heightened measures intended to prevent any possible spread of the Coronavirus Disease (COVID-19).

Journalists and other media operatives seeking to enter the Conference Center during the sitting of the National Assembly would be required to produce their COVID-19 vaccination cards or negative COVID-19 test results before access is granted.

“I am going to be requesting that Members of Parliament who are not vaccinated nor who doesn’t have a negative test, that they consider joining virtually,” the Speaker told Village Voice News in an interview.

The Speaker said given the Standing Orders he could only advise Members of Parliament.

“The rules convening the sittings of Members of Parliament are set out in the Standing Orders, and what I could do is to request that Members of Parliament be concerned about transmission to or becoming infected by, and so if you don’t have a negative test, if you haven’t started the process [of being vaccinated] I am asking that persons join virtually,” the Speaker iterated.

Having tested positive twice for COVID-19, the Speaker said he understands all too well the seriousness of the disease, and how it can spread from person to person. Since its first imported case was recorded in March, 2020, Guyana, as of June 4, 2021, had recorded 17,459 confirmed cases of the virus, of which 403 persons were killed.

Importantly, Thursday will mark the first time since the National Assembly is meeting since the High Court, on April 21, ruled that the appointments of People’s Progressive Party/C (PPP/C) Parliamentary Secretaries Sarah Browne and Vikash Ramkissoon are unlawful.

Though not stating when, the Speaker told Village Voice News that the judgement of the Court will be addressed at the appropriate time. “Fortunately for me, we have a precedent, we have a precedent, and I am in receipt of the records of the National Assembly when the former Speaker addressed a similar issue and I will raise that at the appropriate time,” the Speaker said as he referenced to the case involving Winston Felix and Keith Scotts, whose appointments as Technocratic Ministers during the 11th Parliament were deemed unlawful on the basis that they were among the List of Candidates for the A Partnership for National Unity + Alliance For Change (APNU+AFC) Coalition in the 2015 Elections.

Browne and Ramkissoon’s case was no different – they were both listed on the People’s Progressive Party/Civic (PPP/C) List of Candidates submitted to the Guyana Elections Commission (GECOM) for the 2020 Elections, however, their names were not extracted from the List to sit as elected Members of Parliament.

Opposition’s Chief Whip, Christopher Jones, who had taken the matter to the Court, has repeatedly called for Browne and Ramkissoon to be removed from the National Assembly.

“To not follow the ruling of the High Court in a matter where no stay was granted is a flagrant violation of the rule of law and a slap in the face of democracy. The Speaker, who has training in Law, should now hang his head in shame,” Jones posited said in a recent statement.

He accused Nadir of bringing the Office of the Speaker into disrepute by treating the Parliament of Guyana as an annex of Freedom House.  “We call on the Speaker to function in the best interest of all Guyanese,” Jones urged.

However, days before the announcement of Thursday’ sitting, Attorney General and Minister of Legal Affairs, Anil Nandlall appealed the decision of the Chief Justice (ag) on the appointments of the Parliamentary Secretaries.

A motion for the removal of the Chairperson of the Public Accounts Committee (PAC), David Patter is also expected to by Government’s Chief Whip, Gail Teixeira during Thursday’s sitting.

Since February 1, Teixeira, at the level of the PAC, has been attempting to move a motion for the removal of Paterson, however, she has been repeatedly met with stumbling blocks. The chairman has repeatedly rescued himself causing the motion to be stalled.

The Government’s Chief Whip said the Clerk of the National Assembly Sherlock Isaacs was called in at least twice and legal advice sought, however, the Chair had “refused” to allow a motion for the adoption of the legal opinion. Teixeira said too that the Speaker of the National Assembly had caused to write Patterson over his decision to put an asterisk against a Member’s motion.

“AND WHEREAS to date Mr. David Patterson has demonstrated that he has no respect for the Speaker of the National Assembly and it would appear, in the absence of a response to the Speaker’s letter he is unprepared to obey the Speaker’s instruction; he has disregarded the advice of the Clerk of the National Assembly on several occasions with regard to the Standing Orders and is resolute in his refusal, using all forms of subterfuge, to allow the motion for his removal to be “put” to the vote;” the Government Chief Whip said in another of her clauses.

She has also accused Patterson of consistently and openly violating the Standing Orders.

As such, she wants the National Assembly to move a no confidence motion against Patterson to allow for his removal from the chairmanship of the PAC.

A number of questions tabled by A Partnership for National Unity + Alliance For Change (APNU+AFC) Members of Parliament, Annette Ferguson, Ganesh Mahipaul, Tabitha Sarabo-Halley and Geeta Chandan-Edmond are expected to be answered.

Ferguson had tabled a number of questions based on the contracted employees within the Ministry of Housing and Water, the COVID-19 Relief Disbursement, the allocation of house lots, infrastructural works, and on the feasibility study for the new road linkage from Diamond to Eccles on the East Bank of Demerara.

In May, the Leader of the Opposition Joseph Harmon and the Opposition’s Chief Whip Christopher Jones filed a complaint with the Inter-Parliamentary Union (IPU) over the Speaker’s ‘failure’ to convene sittings of the National Assembly.

The Opposition, in particular the APNU+AFC Coalition, has submitted over 487 questions for oral and written replies.

In an earlier interview with Village Voice Newspaper, Government’s Chief Whip and Minister of Parliamentary Affairs and Governance, Gail Teixeira, had said that the Government was focused on reducing the spread of the Coronavirus Disease (COVID-19) through its ongoing vaccination programme, in addition to the implementation of its 2021 budgetary programmes.

But Opposition Chief Whip, Christopher Jones had said that the Speaker and People’s Progressive Party/Civic (PPP/C) Government’s failure to convene the National Assembly had resulted in a clear lack of transparency and accountability on the part of the very Government.

Mon Jun 7 , 2021
Support Village Voice News With a Donation of Your Choice. A 15-year-old student of a City school has committed suicide last week, prompting immediate intervention by Minister of Human Services and Social Security, Dr. Vindhya Persaud, through the Childcare and Protection Agency (CPA). The CPA has since conducted a full Zoom session with the children of the school and has […]