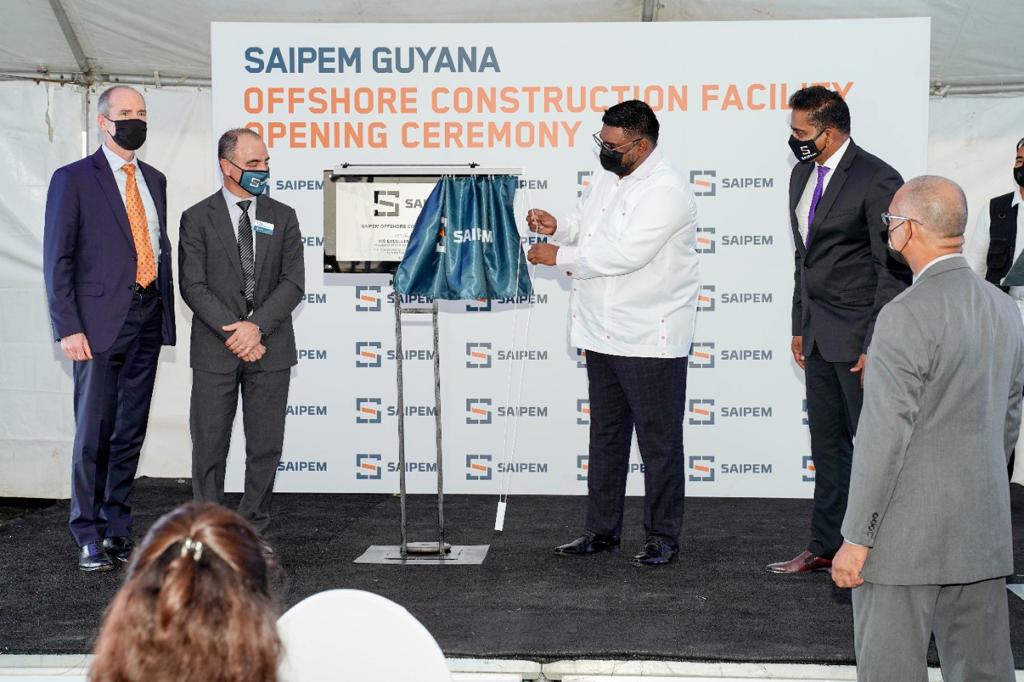 President Irfaan Ali on Saturday emphasised that critical investments will help to provide the necessary pathway which will not only enhance overall development, but will secure a positive future for all Guyanese.

The Head of State made this passionate call Saturday afternoon as he delivered remarks at the opening ceremony of the Saipem Guyana Offshore Construction Facility, located on Water Street, Georgetown.

President Ali congratulated the Italian oilfield services company on its achievement during very trying times for Guyana and its people.

ADAPTION
He called attention to the widespread flooding in parts of the country, which has led to the devastation of crops, livestock and the loss of livelihoods and pointed to the importance of having a multiplicity of income generators to aid the country and its people.
He said that with climate change, there is a need to put systems in place to facilitate unhindered growth.
The President said that his objective is to get all Guyanese out of poverty and to create adaptable plans to ensure that we will not continuously be victims of climate change.

TRANSFORMATIONAL SOLUTIONS
The President added that transformative planning is needed rather than transactional efforts.
“That is why I am very happy with Exxon; Mr Alistaire Routledge and I, we are discussing a transformational solution in building an Oil and Gas Institute right here in Guyana; identifying the skills and providing that opportunity right here so we can have our human resources trained. So I want to make this point, that the key investments to secure livelihoods and open up opportunities in this country will have to be made and we have to make it now.”

ENSURING LOCAL CONTENT CRUCIAL
The Head of State again stressed the importance of local content as a symbiotic relationship with investors.
“Right now, we have an open position; there is no discrimination. But we will have to ensure that in this openness, Guyanese are owning the facilities to be rented, Guyanese are owning the opportunities to invest in those facilities. I’ve made it very clear, and I am very transparent in what I am saying.”
On this note, he elaborated on the expansive meaning of local content that goes beyond the creation of jobs and congratulated Saipem for their efforts in this regard.

“When you talk about investment in local content, we’re not talking only about the creation of jobs. That is important, and I congratulate Saipem, not only for the jobs that you have created but the level of training that you have given and your commitment to providing the further training because fabrication is an important part of the future development of this industry.”

He assured that Government will continue to make the required investments in creating an environment and the opportunity through education, training and development, land ownership through homeownership and through small business development. This, he added, will also lead to the creation of generational wealth.

LEAD AND LEVERAGING
The President urged the private sector to come together and build synergies and go after the opportunities that will arise. He said too that it is a perfect environment for the concept of lead and leveraging, as the oil and gas sector will allow the opportunity for Guyana to leverage ourselves in many different areas.

President Ali pointed to the gas to shore project which he added will not only cut the cost of electricity by 50% but will attract manufacturing and industrial development to Guyana.
“That by itself brings a whole fabrication industry with it. It brings with it marketing, servicing, packaging, distribution, logistics and that is the macro plan we are looking at.”
President Ali also urged Guyanese to embrace all of the opportunities that exist beyond the oil and gas sector.
TRANSPARENCY AND PREDICTABILITY
“So I want to say to Saipem, we are with you and we are with all investors who are committed, not in words, but committed in action, in true local content. Right now we are mirroring the organisational structure of Exxon so we have checks and balances from the Government’s side too. Exxon and the Government, we have very frank meetings.”
He noted that this will contribute to transparency and predictability in the business environment.
In closing, the President pointed to the need for synergies between Central Government and the City. Again, he indicated the advantages of the single window system and the absolute necessity for this mechanism.
He said too that the relationship between investors and the Government also has to be predicated on mutual respect.
CEO and President of Saipem Guyana, Mr Giorgio Martelli and President of ExxonMobil Guyana, Mr Routledge were some of the high-level speakers at the event.

Following the opening ceremony, the President was taken on a guided tour of the facility.
Saipem’s facility features a heavy load-bearing jetty and the largest heavy lift crane in the country.
The new site is geared towards supporting growing offshore operations in Guyana.
Several high-ranking Government officials were also in attendance, including Minister with Responsibility for Finance, the Honourable Dr Ashni Singh; Minister of Natural Resources, Vickram Bharrat and Minister of Home Affairs, Robeson Benn.

Other Government officials, members of the private sector and members of the Diplomatic Corps were also at the opening ceremony. (Office of the President)

Sun Jun 6 , 2021
Support Village Voice News With a Donation of Your Choice. …recovered patients dont think so …authorities urge adherence to guidelines By Lisa Hamilton and Gabriella Chapman The continued rise in COVID-19 cases and deaths in Guyana are putting citizens in a state of concern over the management of the pandemic by the relevant authorities, and to a lesser extent, the […]