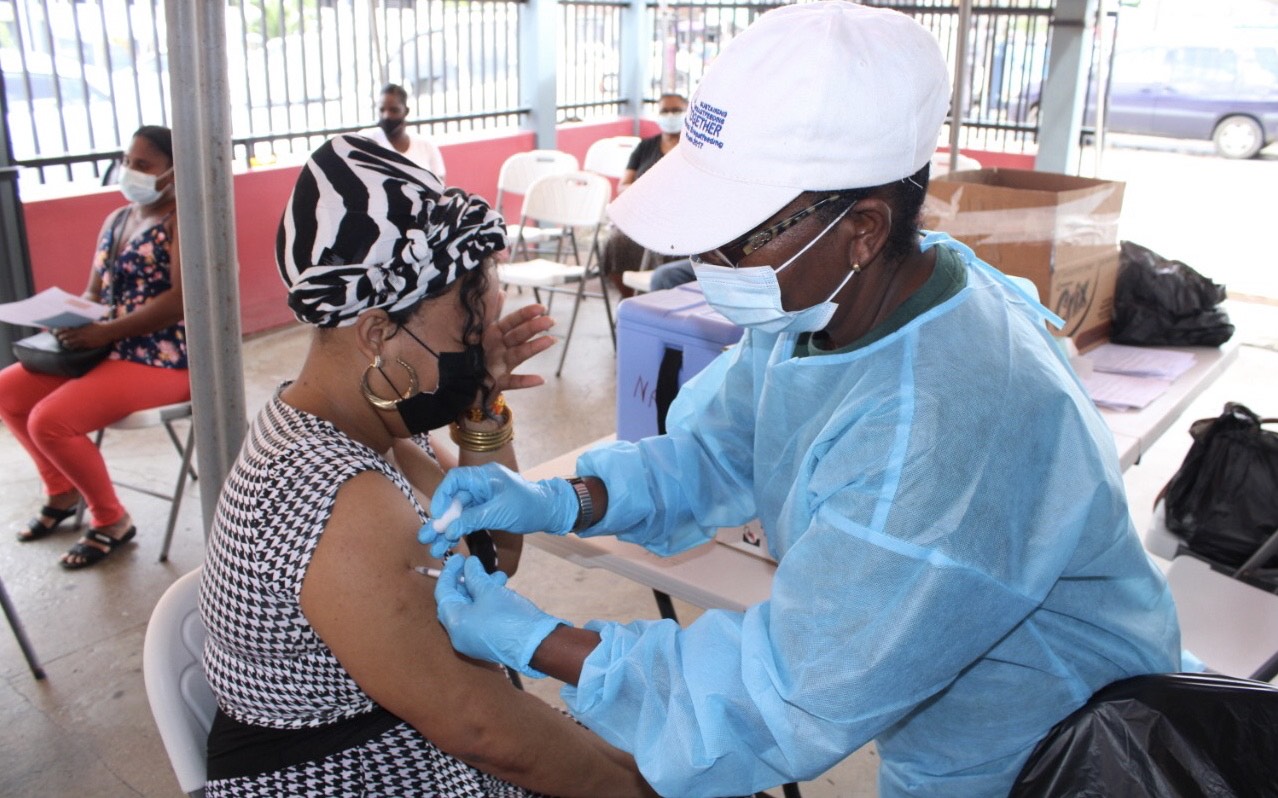 Guyana continues to work its way through the COVID-19 pandemic by rolling out vaccination drives throughout the country in order to achieve herd immunity as soon as possible.

While vaccination drives are being done at various locations in each of the 10 administrative regions, Region Six has become the spotlight after achieving a 50% vaccination target last Wednesday. This was announced by the regions Regional Health Officer (RHO), Dr. Vishalya Sharma during a short press briefing on Thursday.

According to Sharma, over 35,000 residents of Region Six, East Berbice Corentyne who are 18 years and above have been vaccinated allowing them to surpass their 50% vaccination target. She noted that the 50% includes those persons who would have received their first dose of the vaccines; meanwhile, 16% of the region’s population are fully vaccinated.

To achieve this major target, Sharma explained that the region’s health workers were determined to be a part of such achievement as they worked tirelessly, even on the weekends, to offer their service and ensure the population gets vaccinated. Within the last three months, over 120 outreaches were done throughout the region along with vaccination rollouts at 22 health centers within the region. Additional effort was made to ensure residents receive their vaccines as health workers formed a team and began house-to-house visits in several communities. This, according to Sharma, has been a success for the region.

“We still have a long way to go because 50% is good but that is not where we want to be. We want to keep increasing that number, so we are hoping that by the next four weeks we can take that number to 60-70%. So, for the next month, we will set a new target and ensure we get closer to the 100% in order to keep the residents of region six even safer”

Even though some residents were hesitant to get vaccinated, through sensitisation, the region was able to overcome that challenge and get those persons vaccinated allowing the region to lead the way with the highest vaccination rate in Guyana. Sharma highlighted those areas as Angoy’s Avenue, Fyrish, Manchester and a few others; however she was pleased to announce that those very residents are now part of the region’s 50% vaccinated population.

“We have had some challenges but we are now way past that. When the results came in about 2 months ago, we would’ve had 1 person going to the health center in Angoy’s Avenue but I am happy to say that as of to date, it’s a constant everyday thing as 15 to 20 persons are now visiting the health centers every day. For us to get this 50% target was a lot of community mobilization and the 120 outreaches, including mobile visits. Another thing that we noticed was that local community leadership allowed us to get through those persons who were hesitant to take the vaccine. For example, in some areas, once they see familiar faces they are more encouraged to take it. And so, getting people from the NDC to play that leadership role in those communities helped us greatly”

On Wednesday, Minister of Health, Dr. Frank Anthony announced that over 205,000 persons in Guyana were vaccinated with the 1st dose while 72,045 of the above 18 population are now fully vaccinated. The total number of persons who received their first dose amounts to more than 42% of the country’s population. The 72,045 fully vaccinated persons represent over 14% of the overall adult population.

To ensure Guyana crosses the ‘herd immunity’ margin, the Minister is urging persons to get vaccinated and protect themselves and family from experiencing the worst of the COVID-19 symptoms.

Sun Jun 6 , 2021
Support Village Voice News With a Donation of Your Choice. Your personal style can tell who you are, your personality and what you represent. There are special people in the fashion industry who are inspirations to helping others find their fashion sense and style. In the Guyanese context, fashion is most times influenced by what is seen on TV in […]