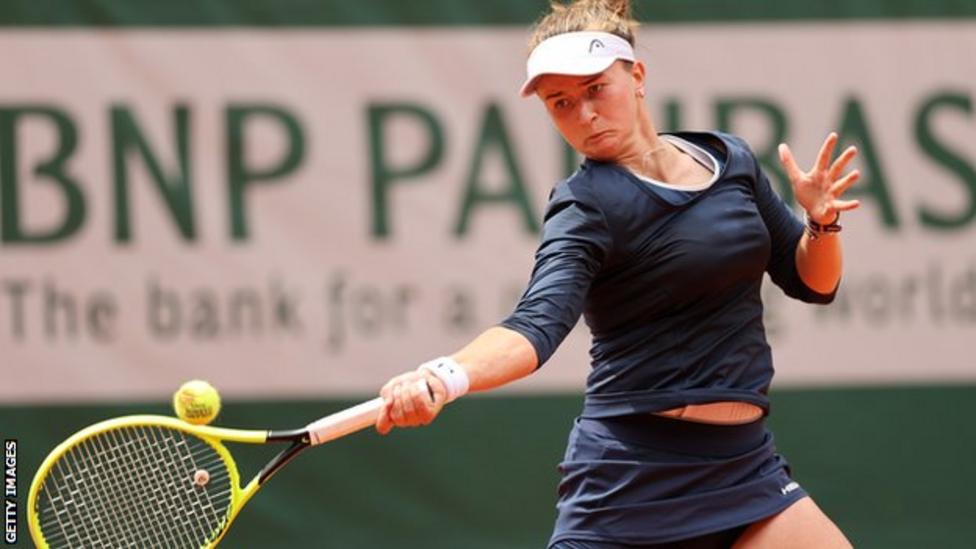 BBC Sport – Elina Svitolina became the seventh top-10 seed to be knocked out in the French Open’s opening week as she fell in the third round to Barbora Krejcikova.

Fifth seed Svitolina was outclassed 6-3 6-2 by the impressive unseeded Czech.

Swiatek and Kenin are two of just three top-10 seeds left standing, along with Serena Williams, who reached the fourth round on Friday.

Gauff, 17, had taken the first set 6-1 against compatriot Jennifer Brady before the 13th seed called for medical assistance and then retired in tears with a foot injury.

“I actually was considering not even playing here. Just up until the day before [the tournament]. Today, I woke up and it was just worse. I couldn’t really play my game, moving about 20%,” Brady said.

Krejcikova, until recently a doubles specialist with two Grand Slam titles to her name in that format, produced arguably the performance of the round in her victory over Svitolina, 26.

The 25-year-old, who won her maiden singles title in Strasbourg last month, never looked back after holding her serve in a mammoth 21-minute game at 4-3 up in the first set, breaking Svitolina in each game either side.

Defending champion Swiatek, then 19, became the youngest French Open women’s champion since Monica Seles in 1992 when she swatted away Kenin 6-4 6-1 in a one-sided final last October.

They are on course to meet again in the quarter-finals if Kenin can defeat Greek 17th seed Maria Sakkari – who beat Belgium’s Elise Mertens 7-5 6-7 (2-7) 6-2 – and Swiatek gets past unseeded Ukrainian Marta Kostyuk.

Swiatek made a wobbly start against Estonian 30th seed Anett Kontaveit by dropping her opening service game but recovered to take the first set to a tie-break, which she dominated.

Swiatek, who won the Italian Open last month, has now triumphed in her past nine matches on clay and is pleased with how she has handled the rise in expectations that comes with defending a Grand Slam title.

“I’m really happy that I’m playing consistently and I’m just trying to approach every match the same way, as I did last year,” said Swiatek, who has now won 20 successive sets at Roland Garros.

“Many players struggle after coming back, after winning a Grand Slam, so I’m really happy that I’m able to handle it.

“It’s good to have matches like that because it keeps you down to earth and you have to just be careful on every point and on every game.”

American Kenin, the 2020 runner-up and highest seed remaining in the tournament, looked in danger of joining the casualty list when she lost the opening set from 3-0 up by surrendering three successive service games to compatriot Jessica Pagula.

But the fourth seed’s aggressive approach ultimately paid off against a more passive Pagula as Kenin hit 48 winners to triumph 4-6 6-1 6-4 in a mixed display that also featured 41 unforced errors and 10 double faults.

The victories for Kenin and Gauff mean there are three American players left in the top half of the draw after they joined Sloane Stephens in the last 16.

With Serena Williams, the bottom half’s highest remaining seed, bringing the overall tally to four, a first all-American final since 2002 – when Serena beat sister Venus – is not beyond the imagination.

Kenin, 22, had suffered four successive defeats before arriving at Roland Garros but the 2020 Australian Open champion came through a second three-setter to set up an intriguing tussle with Sakkari.

“Leading up it wasn’t maybe the best form. But I worked hard over the past few weeks and everything is clicking together. I’m finally not on a one-match winning streak. We’re getting there,” Kenin said.

Gauff, meanwhile, will face Tunisian 25th seed Ons Jabeur in the fourth round, having made just one unforced error in the opening set and not dropping a single point on her serve before Brady retired.

She has reached the fourth round in Paris for the first time, in contrast to compatriot and 2018 runner-up Stephens who booked a last-16 spot for the seventh time in her career.

The 28-year-old, who will face Krejcikova next, beat 18th seed Karolina Muchova 6-3 7-5 but has slipped down the rankings to 59th after being as high as world number three in 2018.

“I took the time to get myself together, find what makes me happy on court, and kind of find my groove back. Obviously results didn’t happen right away, but I knew eventually things would connect,” she said.

LeBron James: Is this the end of an era for one of the NBA's greatest players?

Sun Jun 6 , 2021
Support Village Voice News With a Donation of Your Choice. (BBC SPORT) Since the inception of sport, one opponent remains undefeated for any athlete – regardless of ability, competitive spirit or resilience: Father Time. It could argued that LeBron James has put up the toughest fight yet, having been the dominant force in the NBA for the best part of […]