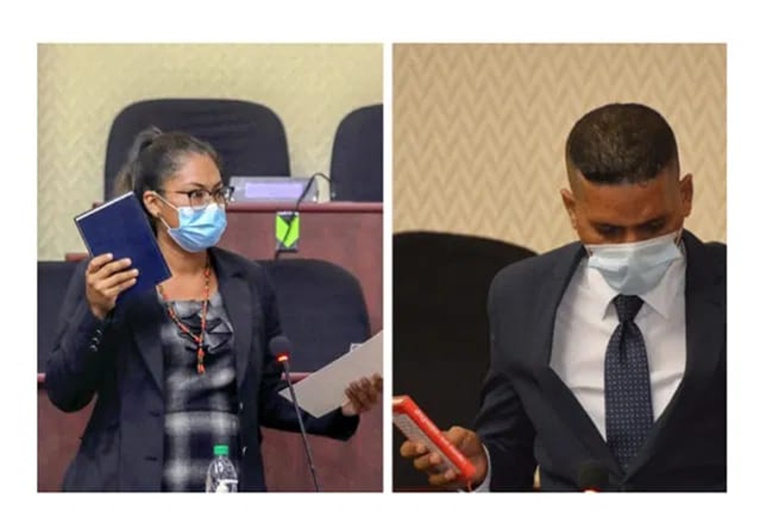 …says Parliament not an annex of Freedom House

Noting that the Parliament of Guyana is not an annex of Freedom House, Opposition Chief Whip, Christopher Jones has intensified his calls for People’s Progressive Party/Civic (PPP/C) Candidates Vickash Ramkisson and Sarah Brown to be removed from Parliament as Parliamentary Secretaries.

On Thursday, Jones told Village Voice News that it is now 45 days since Chief Justice (ag) Roxanne George- Wiltshire ruled that the appointment Ramkissoon and Browne’s appointments as Parliamentary Secretaries were unlawful.

“A certified copy of the Chief Justice’s ruling was made available on May 14, 2021. Leader of the Opposition, Hon. Joseph Harmon, wrote to the Speaker of the National Assembly on the said day calling on him to respect the ruling of the High Court and declare the seats vacant. Additionally, all resources of the state that are currently being enjoyed by these two illegal parliamentarians should have been ceased since Wednesday, April 21, 2021,” Jones told Village Voice News.

He said to date, 21 days after, the Speaker of the National Assembly has neither acknowledged the correspondence nor taken action while the illegal Parliamentary Secretaries continue to receive salaries and other benefits which include drivers and vehicles at the expense of the taxpayers of this country.

“To not follow the ruling of the High Court in a matter where no stay was granted is a flagrant violation of the rule of law and a slap in the face of democracy. The Speaker, who has training in Law, should now hang his head in shame,” Jones posited.
He accused Nadir of bringing the Office of the Speaker into disrepute by treating the Parliament of Guyana as an annex of Freedom House.  “We call on the Speaker to function in the best interest of all Guyanese,” Jones urged.
He also called on the Speaker to declare the seats of the two Parliamentary Secretaries vacant and for all salaries paid to them after the 20 April, 2021 to be refunded.

“The Parliament of Guyana is not annex of Freedom House,” the Opposition Chief Whip emphasised.

Thu Jun 3 , 2021
Support Village Voice News With a Donation of Your Choice. …outsiders voted; residents write govt demanding probe Residents of St Cuthbert’s Mission off the Soesdyke-Linden Highway have filed a complaint with the Ministry of Amerindian Affairs  in which they issued a call for an investigation into the village elections held several weeks ago. The village held elections on May 2, […]