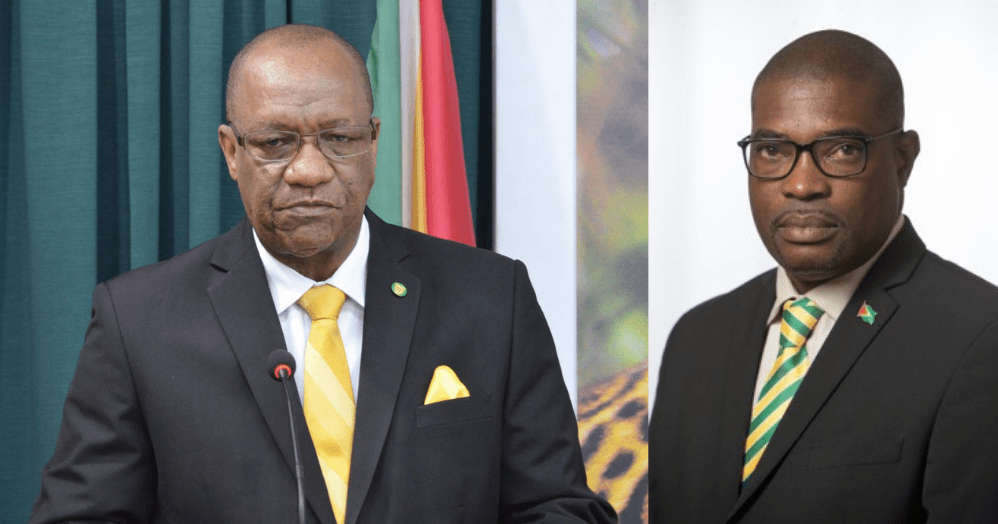 The APNU+AFC has called for the urgent establishment of a National Inter-Agency Task Force to tackle the flooding situation across Guyana, a measure it said should have been implemented by the Government in advance of the May/June rainy season.

At a press conference on Tuesday, Harmon, along with several Opposition Members of Parliament (MPs), said while it is expected that parts of Guyana will be flooded during the May/June season due to Guyana’s age-old drainage problems, the Government failed to implement a mitigation strategy in advance.

“While there has been persistent, intense rainfall compounded by high tides, the main reason for the severe flooding and the slow receding of water from the lands is Executive neglect at the level of Central Government,” Harmon stated frankly.

“We reiterate our call for the urgent establishment of a National Inter-Agency Task Force and for such a Task Force to benefit from the wide availability of skills and resources in all segments of our society.”

In the meanwhile, he urged Guyanese to do their best to protect themselves and their property from damage as the coalition also lends its support.

TOO LITTLE, TOO LATE

Adding his voice, former Minister of Public Infrastructure, David Patterson also opined that it was the failure of the Government to properly plan for the May/June rainy season that led to the severity of flooding across Guyana.

“They blamed sleeping pump attendants and excess rainfall, we reject this claim…the May/June rain comes like clockwork, every Guyanese is well aware that our rainiest season is the May/June,” Patterson said, later adding:

“Unless the Administration changes their approach — stop blaming people, stop driving around at night and walking with the media to see if the pump attendants are awake or not. The pumps can run for as much as 24 hours and we still will be flooded because this key intervention is not just at the pumps and the sluice, the key interventions were not done this year.”

During his presentation, he outlined the efforts of the APNU+AFC, during its years in office, to rectify some of Guyana’s drainage issues and to prepare for each rainy season.

Through a rapid assessment in June 2015, he said that there were 11 sluices in Georgetown with only four working; 7 pumps with two working; six main outfalls with none dredged for decades; and two sluices on private properties and inaccessible to the staff of the Mayor and City Council and the National Drainage and Irrigation Authority (NDIA).

In response, Patterson said that all stakeholders in the private and public sector were called upon for recommendations and the aforementioned issues were rectified by allocating responsibilities to various agencies.

He said that after several sluices and pumps were repaired or bought, works began to improve drainage by removing blockages. In the dry season, he said that annual work was done to clear drains and excavate outfalls.

The former Minister also noted social interventions such as sandbag drives for persons living in low lying areas; lowering water levels at all main canals before May/June for excess capacity and collaboration with every Neighbourhood Democratic Council (NDC)

“We made all these preparations before the rains came…the current situation is that the Government, for some strange reason, has been caught with their pants down, sitting on their hands. They’ve done no mitigation,” Patterson said.

“Too late, too little by this Administration…whatever was done, irrespective if it worked or not by the coalition government, from 2015 to 2020, that has been destroyed.”

He accused the Government of firing community liaison officers who assisted with the aforementioned efforts; failing to adequately engage communities and forming a rift between itself and the M&CC which needs financial help.

In view of the situation and the projected continuance of heavy rainfall, Harmon said that the APNU+AFC has established a Flood Emergency Center at the office of the Leader of the Opposition.

He explained: “We recognised that there has been and is likely to be more disruption to lives, damage to property and loss of livestock, We recognize that there has been a shortage of information, advisories, and sufficient warning and no central portal for persons to report their distress and how they have been affected and their needs. The Flood Emergency Center is intended to assist in collecting, collating and disseminating information for the benefit of the public and the Civil Defense Commission.”

Those interested in the services offered by the Center can contact 503-2465 and other means of communication which will be made available by the party shortly. The Opposition Leader also called on the Government to compensate persons who have experienced losses due to the floods.