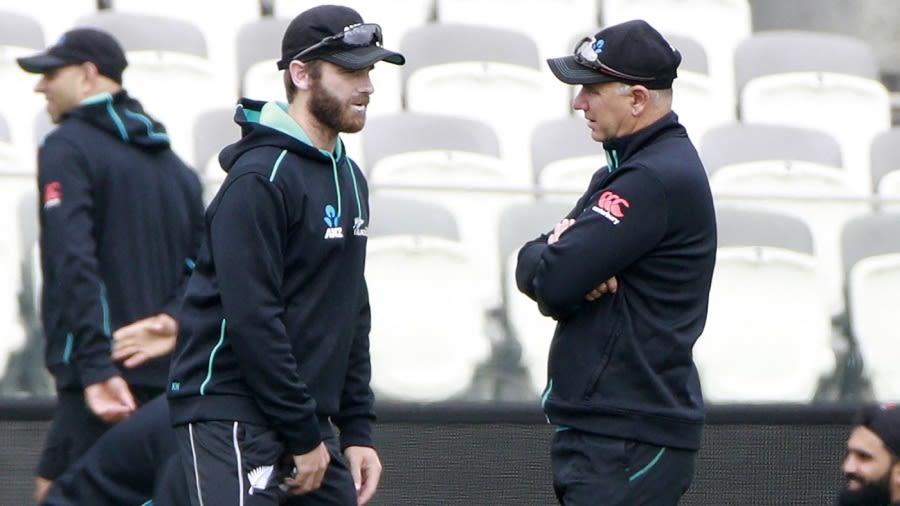 (CRICINFO) Head coach Gary Stead believes New Zealand are in something of a “luxurious position”, with competition for places and just a couple of question marks around their preferred XI to take on England at Lord’s this week. The identity of Tom Latham’s opening partner and how New Zealand choose to balance the side in the absence of Trent Boult are two major selection issues that will be determined between now and Wednesday.

Stead also confirmed that Boult, New Zealand’s regular new-ball partner for Tim Southee, was unlikely to feature in the series against England. The left-armer will fly to the UK this week, after being allowed home to spend time with family after the curtailment of the IPL, but New Zealand hope he will be in contention for the World Test Championship final against India, which follows the England Tests.

“I don’t think you’ll see Trent in the two Test matches here,” Stead said. “He arrives on Friday, our planning and what we’re looking at doing with Trent is having him ready for the WTC final. He’s been home, he has had a week of bowling over there which has been great after the fair amount of isolation time at the end of the IPL. But our view with Trent right now is it’s unlikely that he will play the Test at Edgbaston. He’s more likely to be just available for the one-off Test.”

New Zealand have several pace options available to deputise for Boult in their 19-man squad, and Stead said that the surface rolled out for the first Lord’s Test since August 2019 would influence their thinking.

“Within our squad here, Matt Henry, Doug Bracewell, and Jacob Duffy are the other seam-bowling options, so they’re the ones that I think are in contention to come in there,” he said. “Or we look at a rebalancing of the team. The conditions we face here in England are slightly different to New Zealand and looking at the pitch at Lord’s today, you see a pitch that has a green tinge definitely. “We’re still two days out. But it’s cut to about 6mm – we’re used to a lot more grass on wickets than that. So we have to make that decision around that final balance of our team before we go into the match.”

With Southee, Neil Wagner and Kyle Jamieson all pencilled on to the team sheet, Colin de Grandhomme, who is returning from ankle surgery and likely to be limited as a bowling option, and Daryl Mitchell are the candidates to provide more all-round depth to the side.

New Zealand could also have a decision to make over spinner Mitchell Santner, who has only played one Test since the 2019-20 tour of Australia. Santner can provide runs at No. 7 or 8 – he scored a maiden Test hundred against England at Mount Maunganui in 2019 – but suffered a cut to his spinning finger during the intra-squad warm-up last week. Lord’s has not been a spin-friendly venue in first-class cricket so far this season, although temperatures are set to rise ahead of the Test.

“Mitchell Santner’s come from the IPL, he’s had I guess a reasonably quiet time there. He actually cut the top of his finger the other day in the warm-up game [while] fielding, which was a bit of a blow to him and he’s only had his first bowl back today. But he came through it really well, and what Mitch does is he provides a little bit of a different balance to our team in that he provides you batting opportunity as well.

“So the decision we will have to make is will we go with four frontline seamers, as we have in the past year, when Colin was injured and Kyle came into the team and put that different sort of balance on our team; or do you go with three seniors and then you play the allrounder in De Grandhomme and the allrounder in Santner as well. So they’re the different options that we look at when we are balancing our team, the pitch will ultimately I think determine which way we go.”

On the question of who will get the nod at opener, Stead was keeping his cards close to his chest, although he did say “we’ve been pretty consistent around the way that we select our Test teams, and I don’t think that’s going to change too much at this stage”. Tom Blundell has opened in seven of New Zealand’s last eight Tests, while Will Young, who debuted against West Indies in December, comes into the series in good form, having scored two hundreds during his stint in county cricket with Durham.

Devon Conway, meanwhile, scored an unbeaten half-century after opening with Latham in the game in Southampton. South Africa-born Conway is yet to be capped in Tests, but has piled on the runs in domestic cricket during his qualification period for New Zealand and comes on tour with averages of 75.00 in ODIs and 59.12 in T20Is after a prolific start to his international career. “We will disclose that when we get to the morning of the game but yeah he [Conway] has been one guy we’ve looked at who is certainly an option at the top for us,” Stead said. “But we’ve also got other guys who have done a great job for us in Tom Blundell and Will Young, as well. So it’s a luxurious position to be in a little bit when you’ve got some of the resources that we’ve got at the moment. But yeah, we’ll hold off naming that till match morning.”

Tue Jun 1 , 2021
Support Village Voice News With a Donation of Your Choice. The Leader of the People’s National Congress, Mr. David Granger is deeply saddened by the death of Ms. Daphne Elaine Rogers, MS, who has died at the age of 92.  Ms. Rogers will be remembered as one of the country’s most admired administrators and culturalists who dedicated her working life […]