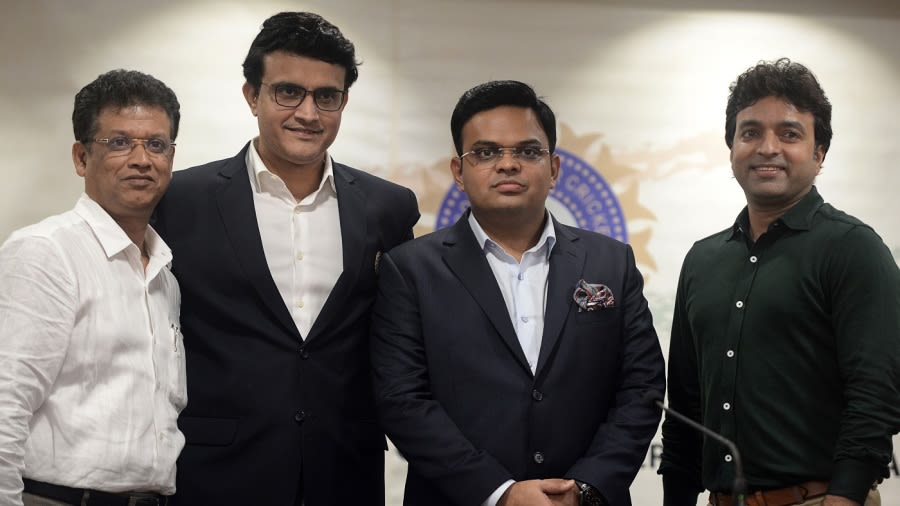 (CRICINFO) The BCCI’s top brass, led by board secretary Jay Shah, reached Dubai via a charter flight on Monday to finalise plans for the remainder of IPL 2021 as well as discuss the probability of the UAE hosting the men’s T20 World Cup this October-November. BCCI president Sourav Ganguly will reach Dubai on Wednesday to join talks with the Emirates Cricket Board (ECB).

On Saturday, the BCCI was authorised by its members – the state associations – to shift the second half of the IPL to the UAE in September-October after the tournament was abruptly and indefinitely suspended in the first week of May. The BCCI had been forced to pull the plug at the halfway stage due to the growing number of Covid-19 cases in the bubble during the Ahmedabad and Delhi leg of the tournament. A total of 31 matches, including four playoffs, remain to be played.

In its talks with the ECB, the BCCI is expected to firstly get the approval of the UAE government to host the IPL there. The discussions are also likely to go into the preparedness of the three UAE venues – Dubai, Abu Dhabi and Sharjah – and the mandatory requirements for creating the tournament bubble for the eight IPL teams.

With players arriving from different parts of the world, and not just India, both boards would need to look at the quarantine requirements that need to be satisfied before the BCCI finalises the standard operating procedures (SOPs) for the IPL.

One other significant point likely to be discussed is around the vaccination for all those that would be part of the IPL bubble. Recently, the Abu Dhabi government approved the hosting of the remainder of PSL 2021 in the emirate on the condition that all six teams and rest of the stakeholders that will be part of the tournament bubble are vaccinated.

The presence of the entire top wing of the BCCI in Dubai can be seen as a first move by the BCCI to shift the T20 World Cup to the UAE, which had been named as a cover for India. The ICC has not yet announced the final itinerary for the the 16-team World Cup.

While India are currently slated as hosts for the event, the state of the Covid-19 pandemic in the country and the suspension of the IPL has triggered strong doubts over the country’s readiness.

At the BCCI’s SGM on Saturday, Ganguly told the members that the BCCI would seek another month’s time to finalise whether India could host the T20 World Cup.

One key point the BCCI team is likely to discuss with the ECB would concern the revenue-sharing arrangement for the tournament should it be hosted in the UAE. Recently Malhotra had said on a BBC podcast that while moving the T20 World Cup to the UAE will be the “worst-case scenario”, the BCCI will still want to retain the hosting rights.

The main reason for that is the lucrative sum involved: every match in an ICC global event is worth about USD 250,000-300,000 for the hosting board. With 45 matches, that is a massive amount of money.

The other point for discussion would be, if the UAE ends up hosting both the IPL and T20 World Cup, can the venues handle two back-to-back marquee events and the fitness of the pitches in such a scenario. A total of 76 matches will be lined up for the venues if both the IPL and the T20 World Cup are played there, excluding the warm-up matches for the latter.

Both boards will also want to consider the prospect of opening up the IPL to crowds. In 2020, when the entire IPL was hosted in the UAE, the BCCI had opted not to allow crowds in. The upcoming PSL in Abu Dhabi, it has been confirmed, will also be played out behind closed doors.

Tue Jun 1 , 2021
Support Village Voice News With a Donation of Your Choice. (CRICINFO) Head coach Gary Stead believes New Zealand are in something of a “luxurious position”, with competition for places and just a couple of question marks around their preferred XI to take on England at Lord’s this week. The identity of Tom Latham’s opening partner and how New Zealand choose to balance […]