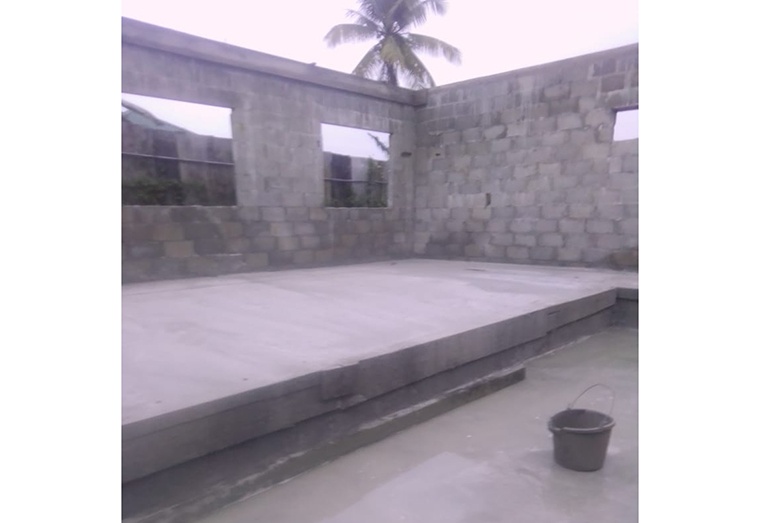 With help from residents and the diaspora, a Linden family of eight will soon move into a brand new home.

Over the past 13 years, Yonikaa Stewart and her seven children have been living in a shack in the Wismar Housing Scheme, Linden without any electricity or access to potable water.

In an interview with this newspaper, the 44-year-old single mother described her living conditions for the past 13 years as “rough”. Stewart said, “Living here is rough most of the times. We have no water, no current. We get water from the creek nearby. Nuff times we cannot see to do certain things in the night so we would have to hustle to get it done in the day”.

In February of this year, Yutiv Brummell, Pastor of Jesus Revival Tent Ministry in the United States of America came across a video of the family which highlighted their living conditions and allowed them to plea for help.

Pastor Brummell was touched by the video and immediately started seeking for donations from family, friends and persons from her church to improve the circumstances under which the Stewart family lived by building a home.

“I was moved with compassion and I decided to start building this family a home by coordinating first, through my church, Jesus Revival Tent Ministry and with my family members. I then put the initiative out there to Facebook and there is where the news began to spread about the Stewart Family Home,” Pastor Brummell recalled.

With the help of both persons from Guyana and the diaspora, Pastor Brummell managed to swiftly begin the process of building a 28 by 40 square feet, concrete, four-bedroom house.

Pastor Brummell noted that the family is currently staying in someone’s shop, and she is hoping that the project will be completed by August or September of this year so that the family can quickly move into the home.

The project’s immediate needs are windows, doors and cement.

According to Yonikaa Stewart whose youngest child is six and oldest is 25, the project has brought great relief to her and she thanked everyone who has contributed to the cause.

Meanwhile, Yonikaa’s 18-year-old daughter, Monica Stewart shared that she dropped out of secondary school at age 15 after getting pregnant. Now, she is focused on getting back into the school system.

“I came out of school at form 4 and I was trying to get back into school but they told me I cannot go back. I am interested in doing information technology, catering and first aid which I really like and I want to learn more about. I wanted to be a nurse and I am willing to go out and learn because I like learning,” Monica said.

The young woman added that it is nice of persons to help.

Among the list of contributors are Guyanese comedian popularly known as ‘Kunchi’, Linden’s Humanity Hub, Food for the poor, and Lester Glen.

After seeing the video that was circulating on social media of the family’s living condition, Kunchi took a hands-on approach in the project and has been reaching out to persons for donations. He also hosted a ‘meet and greet’ to assist with donations for the project from persons of the Linden community.

A representative of Linden’s Humanity Hub, Avery Trim Jr., said that the non-governmental organisation was also inspired to be part of the initiative after viewing the video that highlighted the family’s living conditions.

“We found that the project was aligned with our goals and vision, to restore and create a feasible environment that fosters youth, infrastructural and community development. And so this humanitarian project falls well within our goal to help the less fortunate,” Trim stated.

Trim went on to say, “We were happy to contribute a number of blocks, and in the coming months we are looking to make another contribution as the project progresses”.

Also speaking with Village Voice News was Milika Wade Carryl, the project’s Linden based Coordinator who noted privileged she is to be a part of the initiative.

“I believe that together each achieve more and it’s a great privilege for me to be a part of this programme and seeing this family move from one stage to a next, she stated.

Carryl went on to say, “I know persons are very skeptical in giving because they want to know where their money is going but we are very transparent and everything we do is document in the WhatsApp group that we have and every money is being accounted for so we are just encouraging persons to come on board”.

Carryl is looking forward to seeing the project come to completion and to hand over the house to the family ceremonially.

She also called on the government to regularize the plot of land which the family has been occupying for the last 13 years and to issue the land to the family. Persons interested in contributing to the initiative can contact Milika Wade Carryl on 592-6105230 or Pastor Yutiv Brummell on 347-8643763.

Mon May 31 , 2021
Support Village Voice News With a Donation of Your Choice. Guyana is moving from one crisis to another, and it seems as though there is no serious national effort if not to avoid them at least to effectively manage them. The flood waters inundating the city, towns and villages as a result of heavy rainfall and overflowing of the Berbice […]