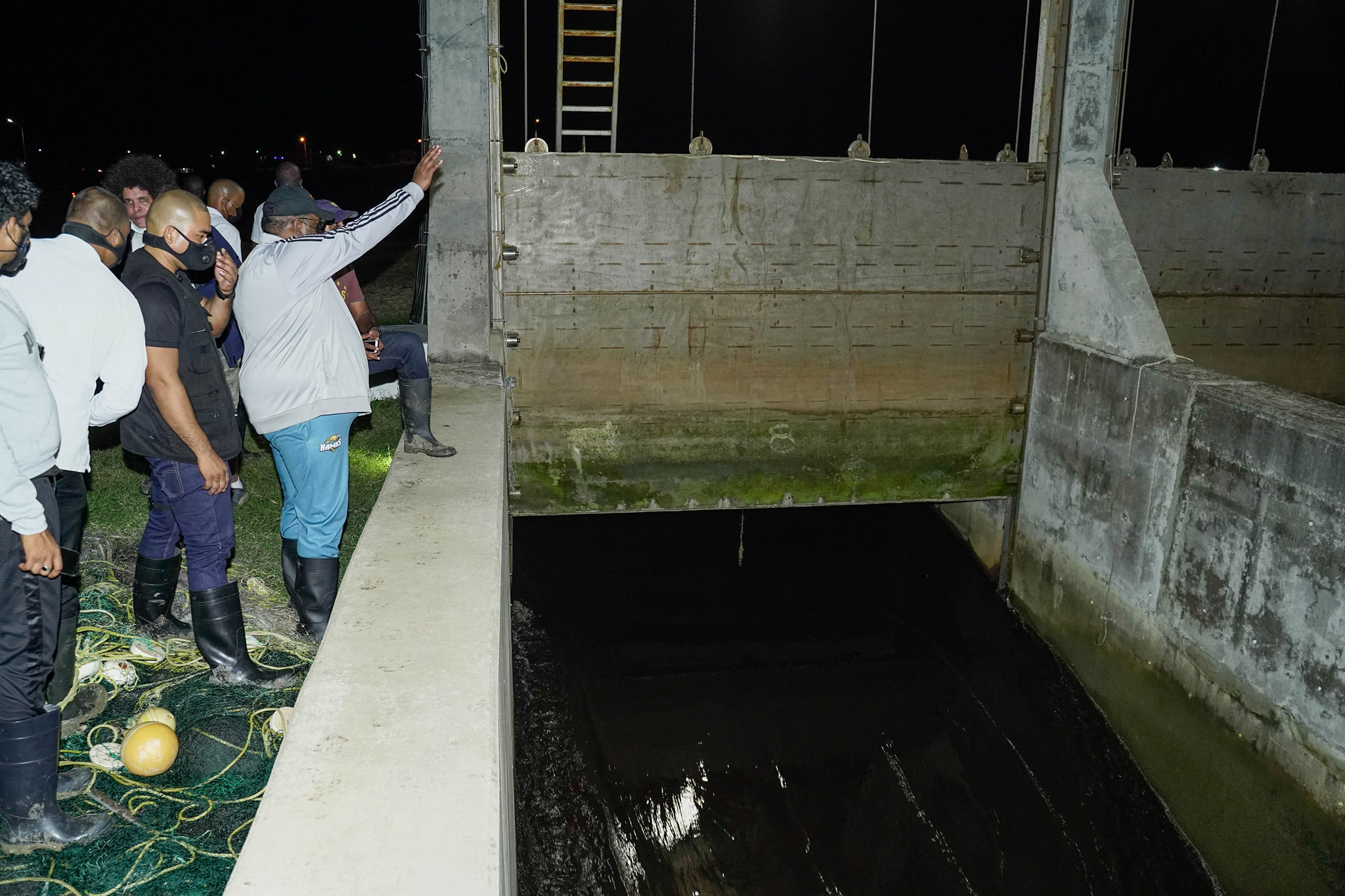 …City Engineer says pumps were likely off to facilitate reopening of sluice
…says some pumps, sluices have issues

Mayor and City Council (M&CC) City Engineer Colvern Venture said on Monday that it was likely that President Irfaan Ali and team visited the Riverview area where the drainage pump was off during a period when it was necessary to be shut off to facilitate the opening of the sluice doors.

Even so, Venture said that an investigation has been launched into the occurrence based on the acquisitions levelled of negligence.

On Sunday night, during a late-night inspection, the President said that he was shocked to find that pumps at Riverview were off, koker doors were closed and a worker was allegedly found asleep during the inspection.

“This is what we are talking about, I came out here myself to verify tonight. The main pump to drain the city is turned off. Up to today, we said that the pumps need to be on 24 hours…while we have to deal with the heavy rainfall we have to deal decisively with the irresponsibility and negligence,” the President stated, as quoted on the social media page of the Office of the President.

At an emergency press conference called on Monday, Venture explained what may have occurred based on reports he received.

On Sunday night, he said that all pumps, except the pump at Cowan Street which developed mechanical issues on Sunday, were in operation up to at least until 10 PM. He said that while the sluice doors were scheduled to be reopened at around 10:30 PM, there is a process involved.

“For this to happen, we will have to turn off the pumps so that we could be able to monitor the level of the waters on both sides of the door so that the operator could have an ease in terms of opening the door. If you have a significant difference in the level of the water, it will give some amount of strain on the operator in terms of opening the sluice door,” Venture said.

“The switching off of the pumps in preparation for opening up this sluice is a normal procedure that we do. So, I believe, based on the observations that were made, it was probably between that period.”

Nonetheless, he said that the decision was taken to launch an investigation into the matter and this has commenced. Upon completion, Venture said that he would submit a report on the findings which will be brought to the public’s attention.

The matter arose as several Regions in Guyana have been affected by flooding due to May/June rainy season and drainage issues.

The President’s first stop while visiting Georgetown was at Meadow Bank at around 22:00 hours, where he inspected the drainage pump and interacted with the pump attendant there. However, at other locations such as Lombard Street, the President questioned why the pump was not on. At another stop at the Kitty pump station, he questioned why two of the city’s most important pumps were not working.

“So, I believe at that time that the visit was made, one of the pumps was off and I believe it might be that. However, we will do the investigation to find out more of that,” he said.

The City Engineer added that there has also been collaboration with the Ministry of Agriculture to correct the problem but this may result in the removal of the pumps to examine their base.

Though the President has deemed irresponsible and negligent the pumps being off and kokers/slucies closed, Venture said that the M&CC has been doing its best in this regard and especially during the rainy season.

“I must indicate that we have not neglected our responsibility. We’ve been working feverishly within the last few days to ensure that we have less water in the City so that we can be able to bring back some amount of normalcy,” he said.

Venture also stressed that, despite the systems in place, due to the level of downpour in Georgetown, the current flooding could not have been avoided.

Even so, he said that the Council visited several areas to determine whether there were blockages and how it could reduce these as quickly as possible.

Venture said that sluices in Georgetown were opened on Saturday morning into the early period of yesterday. Also, based on the records and reports from engineers and officers on the ground, all pumps that were operational, as well as sluices along Demerara River, save for one on Lamaha Street.

Mon May 31 , 2021
Support Village Voice News With a Donation of Your Choice. Last Wednesday, May 26, Guyana marked another Independence Anniversary. Independence was achieved under the leadership of Premier Linden Forbes Sampson Burnham who remains one of the most misunderstood leaders of our time. From his policies, deportment, competitiveness, intellect, philosophy, patriotism to his charisma, detractors have found ways to downplay and […]