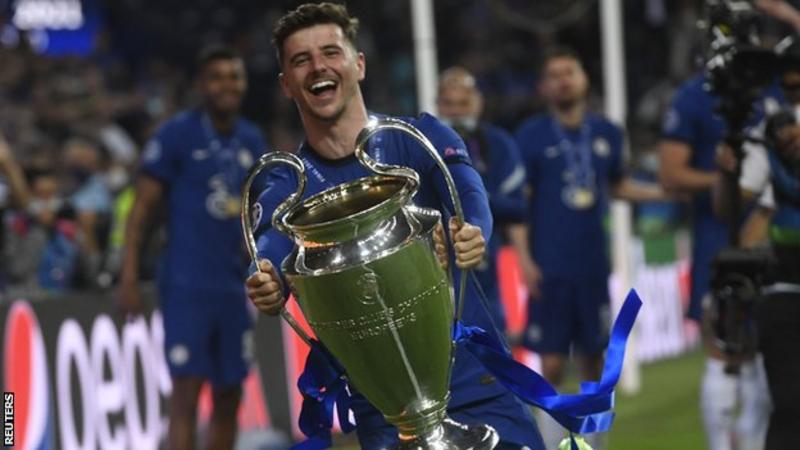 Mason Mount hailed Chelsea as “the best team in the world” as the Blues beat Premier League winners Manchester City to lift the Champions League.

German forward Kai Havertz scored the only goal in the first half in Porto to give the Blues their second triumph in the competition after success in 2012.

City had been looking for a quadruple earlier this season but were beaten in the FA Cup semi-finals by Chelsea. “We are in a final and we won it. It’s such a special occasion,” said Mount.

Midfielder Mount, who provided the assist for the goal, told BT Sport: “I can’t put it into words. It’s impossible. I’ve played in two [previous] finals for Chelsea and we lost them both. It’s all I’ve dreamt of, winning a trophy with Chelsea. “To go all the way in the Champions League, we played some tough teams. At this moment in time, we’re the best team in the world. You can’t take that away from us.”

Mount was named in the provisional England squad for the summer’s European Championship and will almost certainly make the cut for the tournament along with several other players from the final. He added: “Some of the boys from City will be meeting up with us and I know that will be hard. I spoke to them, they deserved to be here.

“It’s tough for them but hopefully next season we’ll be pushing for the Premier League as well.”

Captain Cesar Azpilicueta hailed a “special, special day” and told BT Sport: “[Kai Havertz] was so calm. Not only that. He runs like crazy. That’s why he deserves this.

Havertz has endured a difficult time at Stamford Bridge since joining in the summer from Bayer Leverkusen, struggling with his form as well as his fitness after contracting Covid-19. “I’ve waited 15 years for this moment and now it’s here,” said the match winner.

Man City 0-1 Chelsea: ‘It was the best or worst first meeting’ – Tuchel on finally meeting Abramovich

The former Leicester player suffered heartbreak in the FA Cup final against his old side when he saw an injury-time goal disallowed as the Foxes went on to lift the trophy. Chilwell said: “We fought so hard today. We knew it would be a tough game. In the second half we fought for our lives to get to this moment, to have this feeling. This is what I came to Chelsea for. It’s a dream come true.

‘We wanted to be a stone in their shoe’

Thomas Tuchel has turned Chelsea around after replacing Lampard as manager and won European club football’s biggest prize in just his 30th game in charge.

The win comes a year after guiding Paris St-Germain to the final, where the Ligue 1 side were narrowly beaten by Bayern Munich. He told BT Sport: “To share it with everybody is incredible. We made it. Wow. I don’t know what to feel. “I was so grateful to arrive a second time [in the final]. I felt different.

“The [players] were determined to win this. We wanted to be a stone in their shoe. We encouraged everybody to step up and step out, to be more brave and create dangerous counter-attacks. “It was a tough physical game. We had to help each other out.”

German Tuchel was only given an 18-month contract when he joined the club in January and met owner Roman Abramovich for the first time in person after the game.

“Maybe I have a new contract now with that win,” he said. “I spoke to Roman just now and it was the best moment for the first meeting, or maybe the worst moment. Maybe it can only get worse now.”

Former Chelsea striker Chris Sutton on BBC Radio 5 Live: “Perfect in Porto, terrific, they defended so, so well. Terrific from Chelsea. They deserved it, had Werner had shooting boots on, they would have been well out sight.

“Kai Havertz hasn’t really turned up this season but he comes up with the all-important goal. They have been so well drilled and get the job done. It’s massive for Chelsea and Thomas Tuchel.

“You wondered where he could take this team and he has taken them to Champions League victory. This is the one Pep Guardiola wanted to win and didn’t do enough on the night. “Tuchel was fired up. Last season was a sore one for him. It’s all well and good jumping up and down but [the result is] more to do with the work he is doing in the changing room. They have gone up a dozen notches since he came in.”

Former Manchester United defender Rio Ferdinand on BT Sport: “To do what he has done coming halfway through the season is nothing short of a magician. “They’ve had to come together as a squad, a lot of doubt was put on them as a team and as individuals but now they have marched on. “He has come into this country and played Pep Guardiola’s side three times this season and won all three.”

Former Chelsea player Joe Cole, speaking to BT Sport: “To sit where we are sat among the fans, every man from [goalkeeper Edouard] Mendy to the final man in the squad is a hero.  “That was an unbelievable performance. All these boys are heroes to me now.”

This is why we are where we are: economics over welfare of citizens

Sun May 30 , 2021
Support Village Voice News With a Donation of Your Choice. Dear Editor It is evident that the nation is now in the throes of a life and death struggle as it continues to grapple with a daily surge of not only particularly the number of infections, but also the high death rates as a result of the still raging pandemic. […]