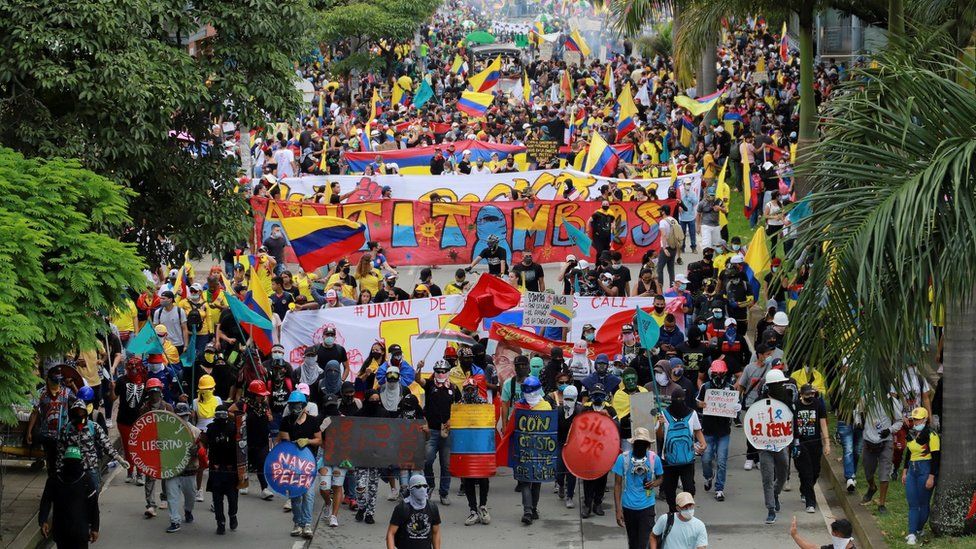 BBC – Colombian President Iván Duque says he is sending the military to restore order in the city of Cali after weeks of deadly anti-government protests.

At least five people died in Cali on Friday night, the latest casualties in a month of protests which have claimed dozens of lives.

The protests began in April over a proposed tax increase.

The tax plan was withdrawn but the protests grew to cover police violence, poverty and Colombia’s health crisis.

Two weeks of negotiations between the government and protesters have stalled.

Cali, which has become the epicentre of the protest movement, is under curfew until Saturday morning.

Speaking at a news conference in Cali, Mr Duque said he was sending in the “maximum deployment of military assistance” to the police.

“This deployment will almost triple our capacity in less than 24 hours throughout the state, ensuring assistance as well at critical points, where we have seen acts of vandalism, violence and low-intensity urban terrorism,” he said.

One of those killed on Friday was an off-duty official in the attorney-general’s office. The man opened fire on protesters before he was killed, Attorney General Francisco Barbosa said in a statement.

On Saturday, a security official in Cali said at least five people had died on Friday in the unrest. He said a further five people had been killed in the city, but it was unclear if these deaths were directly related to the protests.

Sun May 30 , 2021
Support Village Voice News With a Donation of Your Choice. Reuters – Authorities in Vietnam have detected a new coronavirus variant that is a combination of the Indian and UK COVID-19 variants and spreads quickly by air, the health minister said on Saturday. After successfully containing the virus for most of last year, Vietnam is grappling with a rise in […]