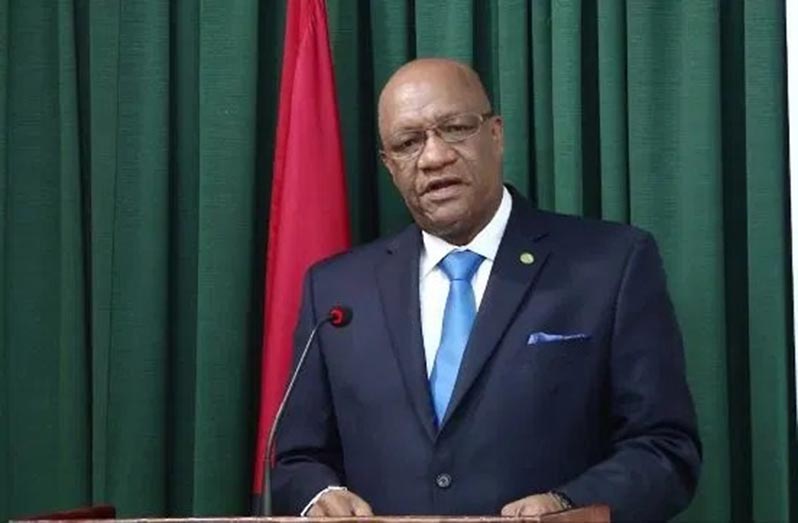 As he joins with the rest of Guyana in observing the country’s 55th Independence Anniversary, Leader of the Opposition, Joseph Harmon said notwithstanding the significant strides made, it is regrettable that the 2020 General and Regional Elections have scarred the nation and once more opened the floodgates of vitriol, distrust and unproductive racial stereotyping.

“As disturbing as it was to witness the regrettable outpouring of hatred and intransigence, it has afforded us the opportunity to bring intolerance out of the shadows and deal with it decisively without blaming and shaming. Let us not sweep it back under the carpet, but rather commit at every level—personal, institutional, political, governmental, social—to consciously, resolutely, and patriotically rid our society of this divisive affliction. I cannot think of any Guyanese who does not recognize that ethnic insecurity has been the root of our historic barrier to nation building. This old colonial curse has been the mill stone to our joint and just development,” the Opposition Leader said.

It noted that since taking office in August 2020, the PPP/C has engaged in a systematic assault on real and perceived supporters and appointees of the APNU+AFC Coalition’s administration.

“The list is long and is not limited to the firing of public servants; partisan discrimination in the distribution of COVID-19 relief; the sidelining of several professionals; and the arrest and detention of many professionals. There are rising anxieties about new and old forms of nepotism and corruption. All this pales in the face of the shocking refusal to convene parliament for the past 90 days. The notion of oneness must never mean “we alone”.  This is certainly not what our independence heroes, women and men of all races, worked so hard to achieve in their quest for self-determination. The carefully nurtured culture of confrontational politics, fueled further today by social media, is further eroding the possibility and our capacity to build a Nation,” Harmon disclose.

It said too that Guyana, with its vulnerable coast on which some 90% of our population lives, is no stranger to the destructive capacity of water.

“Over the centuries this man-made coast, built by the unrecognized and unvalued work of the enslaved Africans in the first instance, has leveled time and time again the efforts of subsequent generations of Africans and Indians, in the main, to make a living independent of the colonial legacy.  The seawall/landwall, the mud dams, the mangroves, and the sluices constitute an integral mix that shores up our ability to live on this coast,” Harmon said.

He said the move to remove the mangrove bordering the bank of the Demerara River on the West Bank of Demerara, demonstrates the failure to inform and consult with citizens as articulated in Article 13 of our Constitution.

Referencing to the national motto: ‘One People, One Nation, One Destiny,’ Harmon said Guyanese need to push for equal and equitable access to decision making and all resources.

Further, Harmon said it is the generational duty of all Guyanese to commit to a model of economic development now that the country has financial resources.

Harmon reminded that with independence comes nationhood. “Political independence from our colonial masters in 1966 introduced some freedoms including important symbols of nationhood such as our national flag, national anthem, motto and other emblems, but what it did not permit was economic independence,” he reminded.

Harmon said Guyana had a high standing in the international community as the country chartered a course to pursue its national interes.

“The 55 years that followed independence were marked by significant points – we became a co-operative  republic and nationalized the commanding heights of our economy –  but as was the case in many post-colonial countries of that era, we struggled across partisan and racially charged political lines to realise true independence.

Today, for the first time in our history, economic independence is a real possibility given our abundant oil and gas resources. This possibility however has come about when the issues of the negative global consequences of fossil fuels are a growing global concern. The issues of climate change and the COVID 19 pandemic could not be more present nationally and beyond. Guyana therefore has a sharpened responsibility to ensure that we mitigate the proven downside of oil by the responsible management of its extraction and the monies garnered from it,” Harmon said.

He said too there needs to the COVID-19 pandemic has exposed many fault lines in the country health systems.

“Our death rate is too high, our infection rate is too alarming and our vaccine roll out is too slow.  We of the APNU+AFC Coalition are redoubling our efforts and encouraging others to join our national push for increased vaccinations as we cannot afford to lose another citizen. I take this opportunity to single out  the efforts of the doctors, nurses and other health workers who have been at the forefront of our fight against this virus. Today, they should be recognized as  national heroes. They go well beyond the call of duty to save lives and ensure essential services,” Harmon said.

He also used the opportunity to highlight the efforts of members of the Disaster Management Teams, Disciplined Service personnel, sanitation workers, delivery staff, transportation, and aviation personnel, providers of various services, government employees, social service organisations, NGOs and generous citizens who have demonstrated solidarity and care for their fellow citizens.

Wed May 26 , 2021
Support Village Voice News With a Donation of Your Choice. It is not a good sign in society where people begin to develop fear and engage in excessive self-censorship because they sense the possibility of danger befalling themselves and or family members. A democratic society is one where freedom of expression is a fundamental right enjoyed by all. Such freedom […]