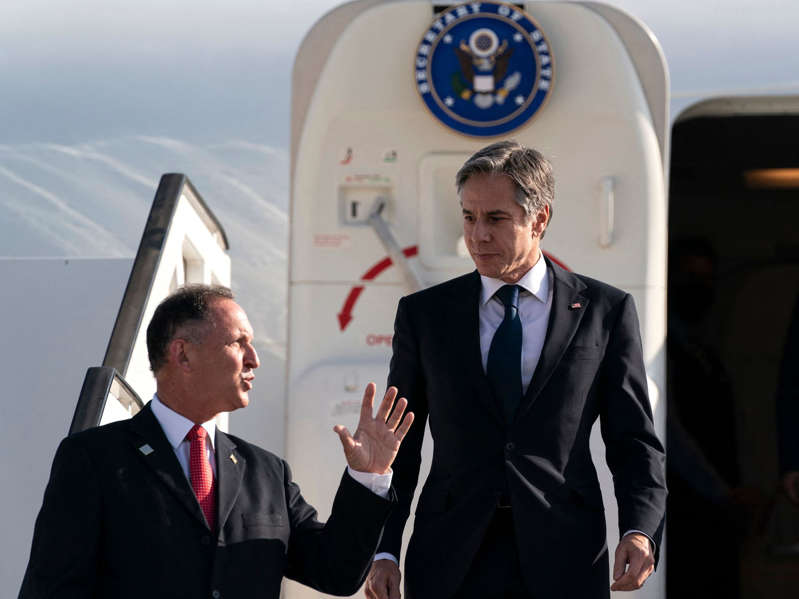 (Bloomberg) — U.S. Secretary of State Antony Blinken kicked off a Middle East diplomatic mission with a pledge to help reconstruction efforts in Gaza, left battered after a destructive 11-day conflict with Israel.

Standing next to Israeli Prime Minister Benjamin Netanyahu in Jerusalem, Blinken said he will specify an aid package to the Palestinians later on Tuesday. The U.S. will ensure that Hamas — the militant Islamic movement that governs the Gaza Strip that is also designated a terrorist group by the U.S., European Union and others — “does not benefit” from international efforts to rebuild the isolated enclave, Blinken said.

Blinken reiterated the U.S.’s commitment to Israel’s right of self-defense, adding that he is working on replenishing Israel’s Iron Dome anti-missile defense system, which intercepted many rockets from Gaza that would have otherwise struck civilian targets. While the two allies appeared in sync about their approach to the Palestinians, there appeared to be some distance between them about the Biden administration’s intention to revive a deal that would end economic sanctions on Iran in exchange for curbs to its nuclear program.

Israel is vehemently opposed to resuscitating the accord with Iran, which it regards as its biggest national security threat, and had backed former U.S. President Donald Trump when he pulled out of the agreement.

The 2015 nuclear deal with Iran “paves the way for Iran to have an arsenal of nuclear weapons with international legitimacy,” Netanyahu said. The U.S. will consult “closely with Israel” about the discussions in Vienna to rejoin the nuclear deal, while at the same time “continue to work together to counter Iran’s destabilizing actions in the region,” Blinken said.

Blinken moves next to the West Bank city of Ramallah where he will speak with Palestinian Authority President Mahmoud Abbas after he wraps up his meetings with top Israeli officials. The secretary of state then travels to Cairo and Amman on Wednesday to meet with Egyptian President Abdel Fattah Al Sisi and Jordan’s Foreign Minister Ayman Safadi before heading back to Washington.

Israel and Hamas agreed last week to an Egyptian-brokered truce that ended an 11-day conflict that killed more than 250 people in the Palestinian territory and 13 in Israel. Israeli airstrikes pummeled civilian infrastructure in Gaza including hospitals and residential buildings, saying Hamas was using them to attack Israel.

Reconstruction is always complicated in Gaza because Israel and donor countries don’t want money or materials to fall into Hamas hands. The U.S. is looking for ways to have the Palestinian Authority, in concert with the United Nations, lead the reconstruction efforts, a State Department official told reporters on Monday.

In his comments with Netanyahu and before the trip, Blinken had underscored how limited the U.S. vision is for the Israel-Palestinian conflict. He didn’t call for a new peace process or press the two sides to start down the road toward a two-state solution. Instead he made clear the U.S. goal is to make the cease-fire stick, get aid to the Palestinians and try to restore some semblance of calm.

It was a far different tone from that taken by Blinken’s predecessor under Trump, Michael Pompeo, who visited last November after Biden won the election and infuriated the Palestinians by visiting an Israeli settlement in the West Bank.

The Biden administration has pulled back the unabashed support Israel got from the Trump White House, by restarting aid to the Palestinians through the United Nations Relief and Works Agency and looking for ways to empower the Palestinian Authority at the expense of Hamas, which has now fought four bloody conflicts with Israel since rising to power in Gaza in 2007.  The U.S. will have to walk a fine line with Netanyahu as it needs him to support — or at least that he not obstruct — U.S. efforts to re-enter the deal with Iran that Trump quit in 2018.

Tue May 25 , 2021
Support Village Voice News With a Donation of Your Choice. (BBC News) The UN mission in Mali has demanded an immediate release of President Bah Ndaw and PM Moctar Ouane, after reports that they were detained by soldiers. In a tweet (in French), the Minusma mission also called for calm in the impoverished West African nation. This comes after reports that […]