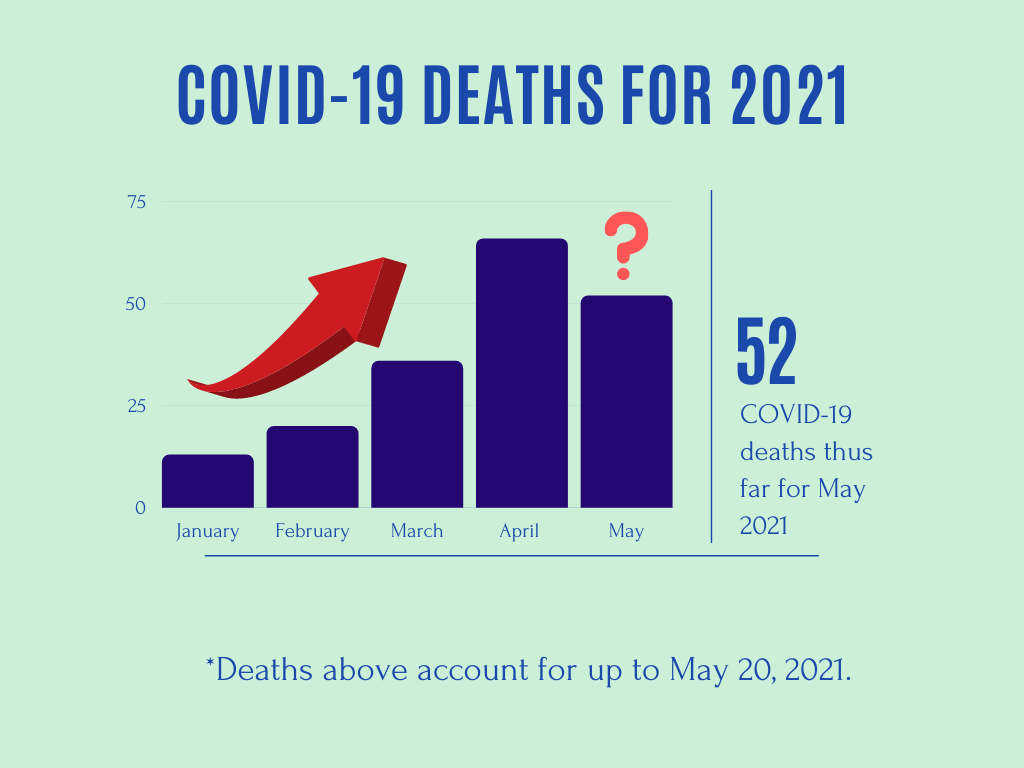 The month of May has recorded 56 COVID-19 deaths thus far, just about 10 deaths fewer than Guyana’s highest monthly total experienced in April 2021 at 66. Since January, every month into the year has seen an increase on the previous.

As of May 20, 32 males died from the virus, while 20 females died. Region Four saw the highest amount of deaths at 26, followed by 8 in Region Three and 7 in Region Six. There were also four deaths in Region Seven and Ten and one death in Region One, Five and Nine.

In his recent update to the public, Minister of Health, Dr. Frank Anthony said that about 66.2 percent of persons 60 years and above in Guyana have received their first dose of the COVID-19 vaccine. Meanwhile, this has been achieved at 33.7 per cent for persons between 40-59. For persons between ages 39 – 18, 27.2 percent of these have been vaccinated.

The Health Minister said that more work must be done with those who fall within the 18-39 to reduce vaccine hesitancy. “When we look at the number of new infections that have been occurring, we’re seeing that those new cases are predominantly between 18 and 40. So, this group is more vulnerable to the infection because they’re more active, they’re moving around, they’re coming in contact with persons who are positive,” he said. The Minister therefore appealed to the age group to come forward to be vaccinated.

Meanwhile, there have been slight improvements in the vaccination programmes for Region 10, with 11 percent of the population there being vaccinated as opposed to a previous percentage of just over 9 percent.

“We continue to urge the leadership in Region 10, persons who have influence in the community, to advocate so that people can go out and get their vaccines. We’re seeing an increase in cases in Region Ten as well, we have right now more than 140 active cases in Region 10, and there are communities where we’ve seen more than 50 cases,” Dr. Anthony said on Friday.

Sun May 23 , 2021
Support Village Voice News With a Donation of Your Choice. — opposition writes letter of complaint to int’l parliamentary body …Jagdeo says coalition has no moral authority on the matter   By Svetlana Marshall  Leader of the Opposition, Joseph Harmon has filed a complaint with the Inter-Parliamentary Union (IPU) over the Speaker’s ‘failure’ to convene sittings of the National Assembly. But […]