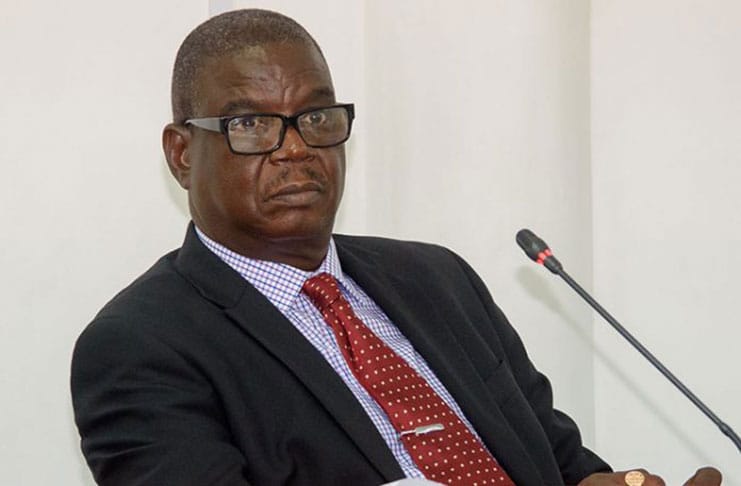 …vows to vigorously defend his name

One day after he was charged along with eight others with conspiracy to defraud the Guyana Police Force, Chairman of the Police Service Commission and Assistant Police Commissioner (Ret’d) Paul Slowe has vowed to defend his name as he rubbished the allegation that he was paid millions of dollars to review the Force’s Standing Orders, though it had already been reviewed.

But through his Attorney Selwyn Pieters, Slowe rejected the allegation as well as the claim that he sexually assaulted an Assistant Superintendent. “The allegations of conspiracy to defraud is false. Work was done on the Standing Orders,” Slowe said while stating that the allegations are intended to tarnished his good name and reputation.

Slowe, who served as an officer of the law for 37 years, explained that there was no timeline in which the review was expected to be completed. He explained that though work had commenced on the review, the General and Regional Elections, held on March 2, 2020, had caused the process to be suspended. The Coronavirus Disease (COVID-19) pandemic had further compounded the situation.

“In the lead up to the elections, the location in which meetings were held became unavailable due to use by the Guyana Police Force for elections purposes. Further, on March 11, 2020, the World Health Organization declared COVID-19 to be a global pandemic. The Election Situation in Guyana which was resolved in August 2020 and the compounding COVID19 pandemic, made meetings to deal with finalization of the Standing Orders not feasible,” Slowe explained through his attorney.

Further, it was noted that as the Chairman of the Police Service Commission, Slowe had other constitutional duties to attend to, including overseas meetings.

Turning his attention to the allegation of sexual assault, Slowe contended that it is simply false.

is also false. No touching at any time took place at any meetings Mr. Slowe attended,” the Legal Counsel stated.

He said Slowe is presumed innocent and will be pleading not guilty to the charges made against him.

“His criminal lawyers will be vigorously defending this matter and look forward to the truth coming out in a court of law,” Pieters assured.

He has linked the allegations to disciplinary actions taken against certain members of the force by the Police Service Commission, signaling that legal actions will be taken against though who have defamed his character.

“Because of the inflammatory manner in which the Guyana Police Force Corporate Communications Unit is peddling these false allegations the public’s record must be set straight and also, to protect the character and careers of Mr. Slowe, members of the Police Service Commission and Senior Police Officers, whose image the Special Organised Crime Unit (SOCU) and Corporate Communications Unit seeks to besmirch for collateral purposes having to do with disciplinary matters at the Police Services Commission involving several Senior Superintendents and the promotions of Senior Police Officers that has occupied the Court since January 2021. Mr. Slowe also intends to vindicate his reputation from the defamation that is being peddled,” Pieters said.

Though Slowe was charged on Thursday, he was not present in court, as at the time, he was out of the jurisdiction.

City Hall announces lower interest for rates and taxes for 2022

Sat May 22 , 2021
Support Village Voice News With a Donation of Your Choice. The Mayor and City Council (M&CC) has decided to reduce its 21 percent compound interest on rates and taxes to 18 percent simple interest and this will take effect on January 1, 2022. The change marks the first of its kind since 1995.   “We lessened the burden on the business […]