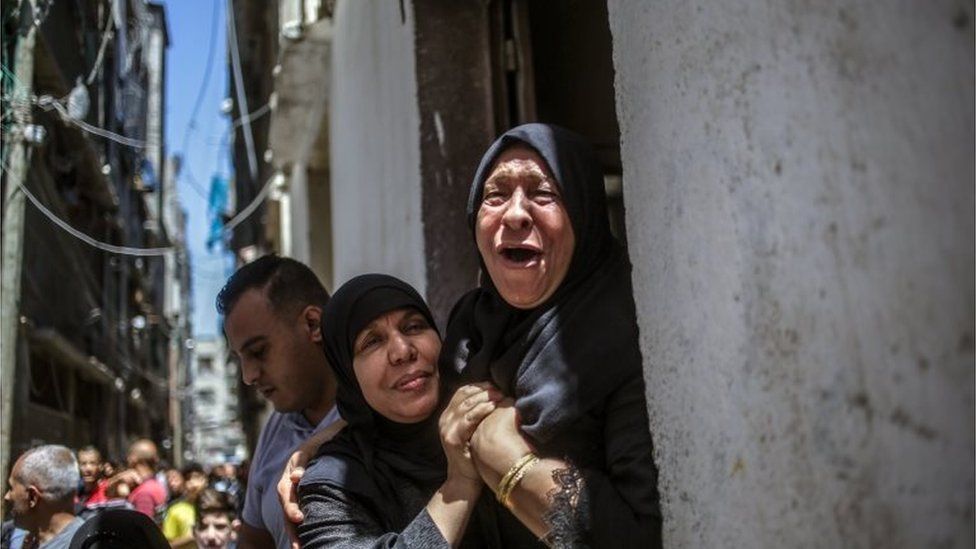 (BBC) The UN, US and UK have called for more protection for the civilians caught in intense violence between Israel and Palestinian militants.

Footage of children being pulled from the rubble in Gaza and people running for shelter in Israel have sparked international alarm.

The conflict is now in its second week, with little sign of a ceasefire.

Israel says most of those killed in Gaza are militants and that any civilian deaths are unintentional. Hamas, the militant group that runs the territory, does not acknowledge this.

Sirens were sounding again on Monday night in Israel, with rockets incoming in the south and north, close to the Lebanese border.

Israeli leaders have also, again, vowed to keep up their campaign.

There is mounting international concern over the violence, with world leaders and humanitarian organisations urging for measures to be taken to avoid residents being hurt, killed, or having their lives upended by the destruction.

In the UK, Prime Minister Boris Johnson’s spokesman said Israel must avoid civilian causalities, but expressed concern that “Hamas is again using civilian infrastructure and populations as cover for its operations”.

US Secretary of State Antony Blinken urged both sides to protect civilians, especially children, while reiterating that Israel “as a democracy has an extra burden” to do so.

The United Nations has also expressed concerns about the damage to infrastructure in the already impoverished Gaza Strip, home to two million people. It said that 40 schools and four hospitals had been “completely or partially destroyed” in recent days. It also warned that fuel supplies there were running out, threatening basic services.

German Chancellor Angela Merkel has called for an end to the fighting, while speaking with Israeli Prime Minister Benjamin Netanyahu.

However, she reaffirmed Israel’s right to defend itself against the attacks, according to her spokesman.

France and Egypt are among the other nations calling for an immediate ceasefire.

The outbreak in violence began after weeks of rising Israeli-Palestinian tension in occupied East Jerusalem that culminated in clashes at a holy site revered by both Muslims and Jews. Hamas, which controls Gaza, began firing rockets after warning Israel to withdraw from the site, triggering retaliatory air strikes.

The clock is ticking for Israel

Israel is not done in Gaza. There is every sign that its military strikes will continue for some time.

Officials describe a phased series of attacks, with the overall aim of destroying as much of Hamas’s infrastructure and manpower as possible in the time available.

And how much time is available? Secretary of State Antony Blinken said last night that “the violence must end immediately”.

But President Joe Biden has so far backed Mr Netanyahu, saying Israel has the right to defend itself. And the US has – for the third time – blocked efforts at the UN Security Council to issue a statement calling on Israel to stop.

Mr Netanyahu knows that he still has time to achieve more in Gaza, provided Israel can avoid killing too many more civilians.

As many as 40,000 civilians have been forced from their homes and the UN is warning of a worsening humanitarian situation. The clock is ticking.

How has the violence spiralled?

A teacher from Gaza told the BBC that life there is “extremely frightening”.

“The first thing we do is gather together as a family and find the safest place, but there’s no safe place when there’s an air strike,” said Hanan, 26. “We gather together and my mother says all the time, ‘if we’re going to die let us die together’.”

The Israeli military said it struck 35 “terror targets” and destroyed more than 15km (nine miles) of an underground tunnel network belonging to Hamas.

Israel said a senior commander of the separate Islamic Jihad group, Hussam Abu Harbeed, was killed in one of the strikes and later said it had also hit the headquarters of Hamas’s internal security operations.

Palestinian officials in Gaza, meanwhile, said the strikes had caused widespread power cuts and damaged hundreds of homes and other buildings. They have upped their overall injury toll to 1,400 people.

In southern Israel, one rocket hit an apartment building in the city of Ashdod and several people were reportedly hurt.

An Israeli tech executive and father of three, Eitan Singer, told the BBC: “It is not easy – seven days in a row when we go to sleep and almost every evening, every night, we get the kids out of bed, run to shelters. We have 30 seconds to 60 seconds to find a shelter.”

Israel said more than 3,000 rockets have been fired into the country over the past week, called this an unprecedented number.

The country’s Iron Dome defence system is said to have intercepted 90% of the rockets.

Israeli emergency services have reported an overall total of 311 injuries, six of them severe. One person has also died of wounds sustained during riots in Israel. Clashes between Arab and Jewish Israelis have left an additional 193 people injured, 10 seriously.

Tue May 18 , 2021
Support Village Voice News With a Donation of Your Choice. (SPORTS MAX) Veteran International commentator, Joseph ‘Reds’ Perreira has launched a stinging rebuke of Cricket West Indies (CWI) and the West Indies Players Association (WIPA) for the timing of contracting players for the upcoming calendar year. In addition, the 81-year-old Perreira says he is totally and utterly disappointed that there […]