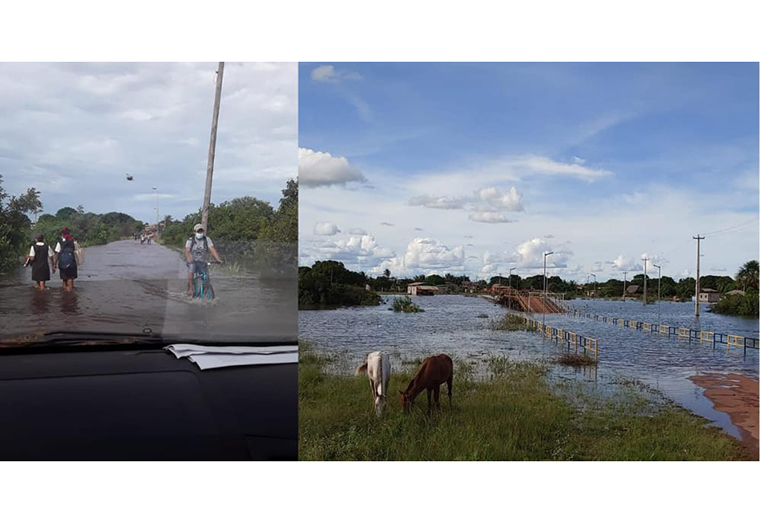 The St. Ignatius Bridge in Region Nine, which leads to Stock Farm and other villages, has been flooded and overtopped by water — effects of the heavy rainfall and water flow from mountainous areas to lower areas experienced during the May/June season.

Residents, including school children, were seen wading through floodwaters to get to their destinations. Flooding in the Region has also affected livestock and crop farmers in Lethem, Tabatinga, and Culvert City.

Flood assessments are being conducted by the Guyana Livestock Development Authority (GLDA) in collaboration with the National Agricultural Research & Extension Institute (NAREI).

The teams have been noting the damage and losses incurred and will come to a conclusion subsequently regarding what assistance can be provided.

Apart from directly experiencing rainfall, water from the mountainous areas can also flow down to lower areas also contributing to flooding.

At the St. Ignatius Bridge, the water has been reported as steadily rising. While some vehicles have cautiously been maneuvering the route, some persons have resorted to using their personal boats to transport persons over the flooded area.

Tue May 18 , 2021
Support Village Voice News With a Donation of Your Choice. (Reuters) President Joe Biden and first lady Jill Biden reported a drop in income as they filed their tax returns for 2020 on Monday, marking a return to the normal practice of releasing such information by modern U.S. presidents. The Bidens reported income of $607,336 in 2020, down from $985,223 […]