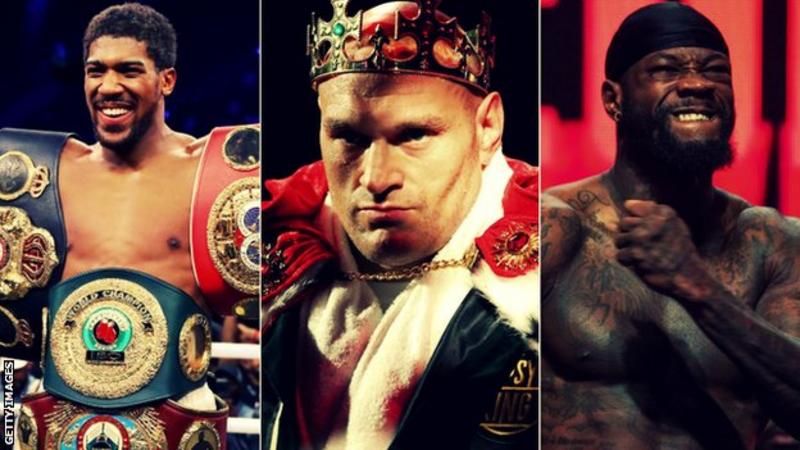 (BBC SPORT) Tyson Fury has been ordered to fight Deontay Wilder for a third time, casting doubt over a proposed August super bout with Anthony Joshua.

Fury, 32, won the WBC world heavyweight title from Wilder in a rematch in February 2020 after an initial draw.

The pair were due to fight again but delays caused by the Covid-19 pandemic prompted Fury to seek an alternative.

On Monday a US judge ruled in mediation that Wilder has a right to face Fury for a third time before 15 September.

The American’s team had long argued their fighter had a contractual right to a third fight with Fury.

But after delays caused by the pandemic led to a July 2020 contest being postponed, Wilder’s team then sought to move the bout into 2021.

Fury refused the 2021 date and stated he would move on. That prompted mediation overseen by American judge Daniel Weinstein, who has now sided with Wilder and set a 15 September deadline for a third contest.

Fury’s US promoters Top Rank did not wish to comment on the development when contacted by BBC Sport.

Just 24 hours before Monday’s arbitration hearing, Fury confirmed he had agreed to fight fellow Briton Joshua – holder of the IBF, WBA and WBO belts – for all four heavyweight world titles in Saudi Arabia on 14 August.

Joshua’s promoter Eddie Hearn has also stated several times that the August bout was in place with terms agreed.

The mediation outcome does not necessarily mean a Fury-Joshua fight cannot take place in August but fresh deals will now need to be struck for it to do so.

This could take the form of Wilder being offered a financial sum to allow Fury-Joshua to take place.

Pay-per-view sales and ticket sales will serve to substantially add to the total revenue of the contest.

If it goes ahead, Joshua versus Fury will be the first bout in heavyweight history where all four world titles are on the line.

Just 24 hours after Fury said he had been in conversation with Saudi organisers and agreed to seal the deal, this Wilder news will come as a blow.

How big of a blow is yet to be made clear.

With so much money to be made from Joshua v Fury, one would think a deal will be struck with Wilder whereby he steps aside and perhaps even gets told he can face whoever stands as champion in 2022.

It may suit him to do so given he can pocket a sizeable sum and prepare with a fight of his own in the short-term as he has been out of the ring for 15 months.

It should be stated that there were already countless moving parts to a Joshua-Fury deal with three promoters, several broadcasters, four sanctioning bodies and a host venue all needing to work as one. In a business where politics can often play a part, it was never going to be easy.

Any postponement would prove highly damaging for the sport given so many fans away from the boxing hardcore will tune in to watch it. It is a golden opportunity to draw new people into the sport and fights with such a crossover appeal rarely arise.