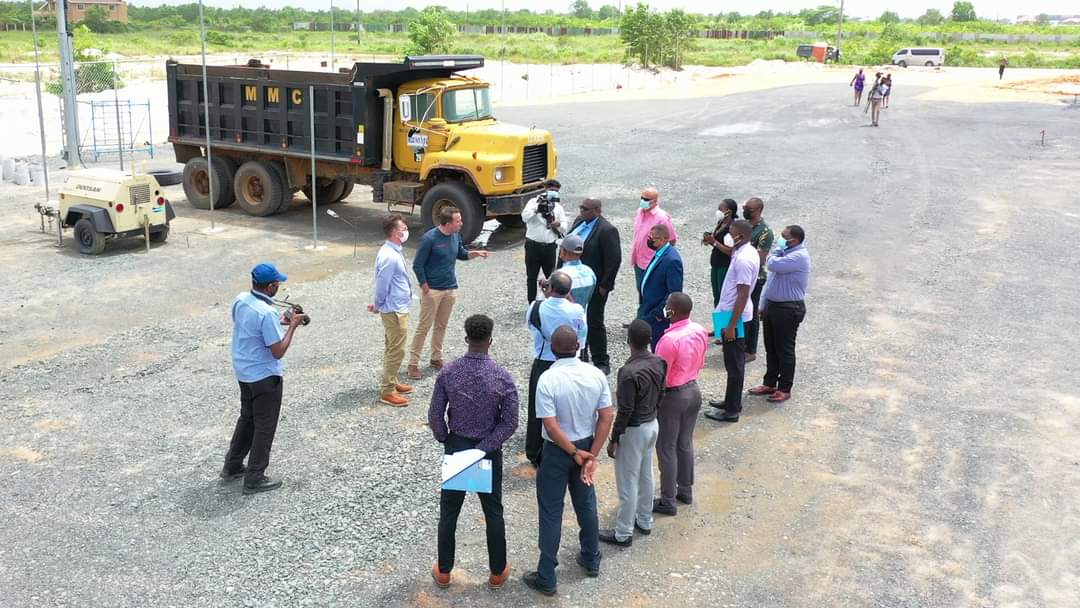 Proprietors of Superior Concrete Inc, have been served with a cease work order and have also been ordered to leave the country within seven days after flagrantly violating Guyana’s laws and chasing government officials off the Houston Georgetown premises on Tuesday.

The company, owned by foreigners has begun constructing a concrete factory at S5 Area ‘S’ Houston, Georgetown without the relevant approvals from agencies such the Mayor and  City Council, the Central Housing and Planning Authority (CH&PA), and the Environmental Protection Agency.

They were served with two previous cease orders which were disregarded and on Tuesday the issue took escalated when directors of the company Richard Austin Shamlin and Ian Jones chased Housing Minister, Collin Croal and the CEO of CH&PA, Sherwyn Greaves from off the property.

In a statement CH&PA noted that Minister  Croal and Greaves visited the location on Tuesday, where two men identified as representatives were served with a third Contravention Notice. Minister Croal outlined that based on the Central Housing and Planning Authority’s (CH&PA) land use policy, the parcel of land has not been approved for industrial activity and the relevant agencies were not engaged, CH&PA said in a statement.

“As a government we welcome investment, but there is a proper manner in which investments are to be done and the first agency that is involved in permits for construction and commercial purposes is the Central Housing and Planning Authority… However, no application was done and secondly when the Central Housing and Planning Authority team came to serve that [first] contravention notice, they were met with a hostile environment,” Minister Croal said.

The first contravention notice was served to the company on May 5 by Enforcement Officers attached to CH&PA, who reported that the notice was destroyed by representatives of the company, prompting a second notice on May 8. The second notice was placed in a conspicuous location as mandated, since no one was on the property at the time, the CH&PA statement read.

Minister Croal further stated that all of the necessary legal frameworks will be employed by the state to ensure that the issue is resolved.

Meanwhile, CEO of CH&PA, Mr. Sherwyn Greaves, stated that the factory, is also a concern to the residents living in the area, who have listed several complaints since the establishment of the facility.

CEO Greaves also noted that in order to begin operation the company would have also needed approval from the Environmental Protection Agency (EPA) and the Mayor and City Council (M&CC).
All prospective investors are being urged to comply with zoning protocols and contact CH&PA for all planning permits, and information regarding land use and zoning.

Wed May 12 , 2021
Support Village Voice News With a Donation of Your Choice. Guyana has joined the rest of the world to observe on Wednesday International Nurses’ Day 2021 under the theme, “Nurses a Voice to Lead, a Vision for Future Health Care”. Every year on May 12, nurses worldwide observe the birth anniversary of Florence Nightingale, who is credited with professionalizing and […]