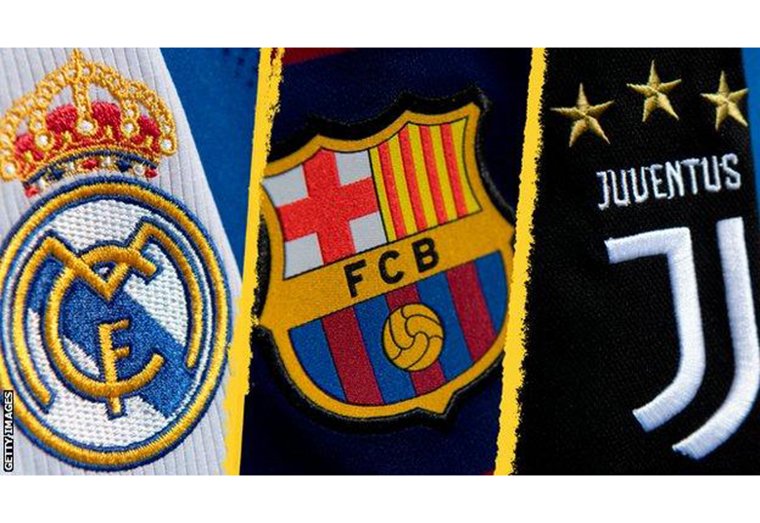 Real Madrid, Barcelona and Juventus have defended their plans for a European Super League in the face of what they call “threats” from Uefa.

They are the only clubs from the initial 12 yet to withdraw from the proposed ESL, and face disciplinary action from Europe’s governing body.

The nine other clubs involved, including six Premier League sides, have been given a financial punishment.

“The founding clubs have suffered,” a Real, Barca and Juve statement said.

The three clubs say they have faced “unacceptable third-party pressures [and] threats… to abandon the project”, which they feel is an effort to have them “desist from their right and duty to provide solutions to the football ecosystem via concrete proposals and constructive dialogue”.

“This is intolerable under the rule of law,” the joint statement continued.

The ESL was announced on 18 April but within 48 hours the plans had fallen apart, with the English clubs withdrawing after fan protests and UK government pressure.

While the furious backlash stopped plans from going ahead, those behind the ESL have maintained it had a sound legal footing. As a result, they were quick to file injunctions to prevent player and club bans after the proposal was made public.

On Friday, the nine that have pulled out – Arsenal, Chelsea, Liverpool, Manchester City, Manchester United and Tottenham Hotspur, plus AC Milan, Inter Milan and Atletico Madrid – said they would “take all steps within their power” to end their involvement in the breakaway league.

Barca, Juve and Real have said they “are ready to reconsider the proposed approach”, but reiterated their stance that the structure of elite football in Europe, its appeal to younger generations and the financial pressures facing clubs, need to be addressed.

“We would be highly irresponsible if, being aware of the needs and systemic crisis in the football sector, which led us to announce the Super League, we abandoned such mission to provide effective and sustainable answers to the existential questions that threaten the football industry,” they said.

“The material issues that led the 12 founding clubs to announce the Super League weeks ago have not gone away.

“To honour our history, to comply with our obligations towards our stakeholders and fans, for the good of football and for the financial sustainability of the sector, we have the duty to act in a responsible manner and persevere in the pursuit of adequate solutions, despite the unacceptable and ongoing pressures and threats received from Uefa.”

The clubs said they “regret to see” the other nine clubs “now found themselves in such inconsistent and contradictory position when signing a number of commitments to Uefa”.

The nine clubs who withdrew have agreed to make a combined 15m euro (£13.4m) goodwill contribution to benefit children’s and grassroots football across Europe.

They will also have 5% of Uefa competition revenues withheld for one season, starting in 2023-24, and this money will be redistributed, including in the UK. (BBC Sport)

Sun May 9 , 2021
Support Village Voice News With a Donation of Your Choice. Opus, a leading publisher of luxury limited-edition books in sports, film and entertainment, has announced a partnership with Usain Bolt to produce the publication of Bolt – The Opus, a luxury limited edition, capturing iconic Olympic moments and treasured memories of the eight-time Olympic gold medalist and 100m and 200m […]