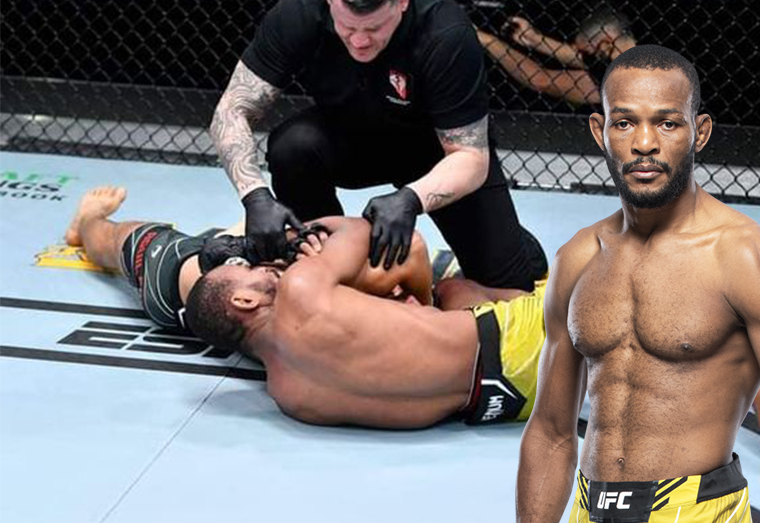 Guyanese Carlston Harris on Saturday evening defeated Christian Aguilera in his debut fight at the UFC.

The 33-year-old native of Guyana, who fights out of Brazil, came right out and immediately put his opponent in a clinch, a strong position for a takedown. But the takedown try was unsuccessful, and moments later Harris ran into an Aguilera uppercut, which stopped him in his tracks but did not deter him. Harris then landed an attention-getting punch of his own, drawing a takedown attempt by Aguilera. And Harris calmly defended the shot and turned it
When Aguilera went unconscious, referee Marc Goddard jumped in to end the bout at 2:52 of Round 1, giving Harris his fourth straight win and eighth in his last nine bouts.

Aguilera, a 29-year-old fighting out of Brea, California, lost his second straight after running off a three-fight winning streak.
Before the fight pundits had noted that he had fought some decent calibre fighters and boasts unanimous decisions over the likes of of Michel Pereira (2015) and welling Turman (2016). He was also coming off a brilliant win over Saygid Izagakmaev, wrapping him up in a d’arce choke to hand the Russian his second ever loss.

🐍 HOW 'BOUT THAT SQUEEZE!

Harris was also said to be handy on the ground. Aguilera went into the fight with his boxing heavy approach and he likes to mix in takedowns. Harris, it was reported can strike from range, but he is most deadly in the clinch and when he can cinch up a body lock to set up a submission.

Media reports say that Harris has put his time in outside the UFC and the 33-year-old is deserving of this opportunity. He’s beat a lot of tough guys like Carl Booth and Saygid Izagakhmaev. He also has wins over the UFC’s Michel Pereira and Wellington Turman.

What Harris is best at is pressing guys against the cage to wear them out. He’s usually the one in control along the cage with the correct head placement and position control. Harris is a solid wrestler but it’s more so his second and third efforts that solidify the takedowns. Harris can very well grind out some gritty slow-paced fights but can finish at any point of the fight. He throws some nice long one-two combinations and has some pop behind his hands. His wrestling isn’t at a high level but once he does get the fight grounded he excels. Harris has strong and intelligent top control. He’ll give too much space at times but is really good at throwing up chokes in between scrambles. His gas tank isn’t the best as he usually banks on winning at least two of the three rounds.

Opposition alarmed over rapid spike in COVID-19 cases and deaths

Sat May 8 , 2021
Support Village Voice News With a Donation of Your Choice. …calls for selective lockdown of hotspot areas The APNU+AFC Coalition said it is alarmed by the rapid spike in the number of deaths related to COVID-19. There have been nine deaths in the past 24hrs and 24 deaths over the past six days, the coalition said in release Saturday night. […]