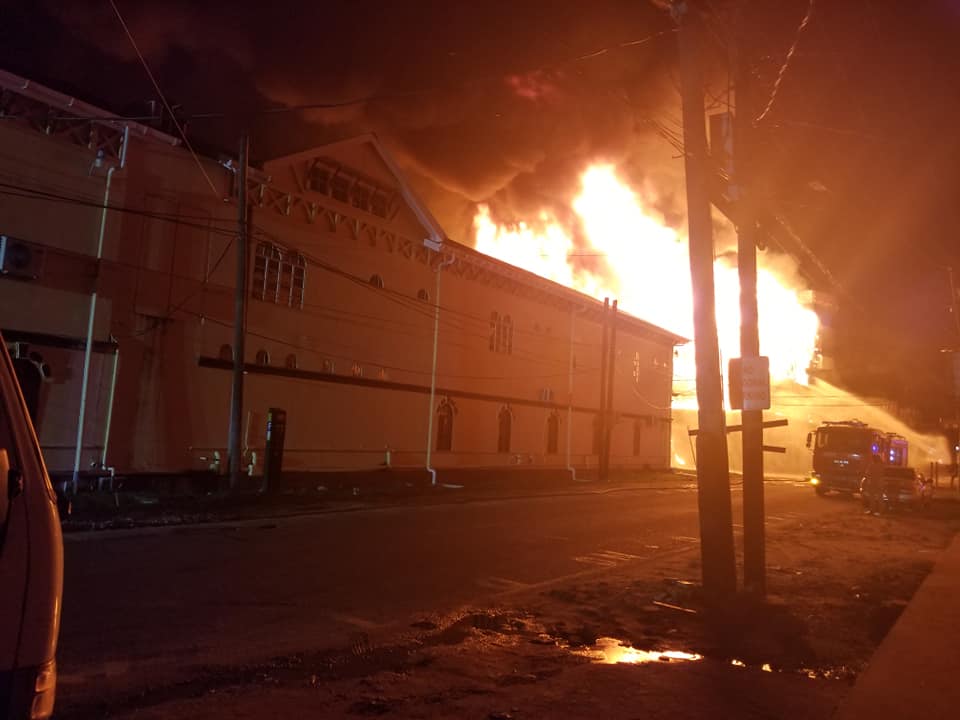 “When I saw the entire building was up in flames I actually fainted,” said owner of S&S Beauty Basics, Shameeza Alli

“When I saw the entire building was up in flames I actually fainted,” said owner of S&S Beauty Basics, Shameeza Alli as she recounted to the Village Voice News the day Sharon’s Mall went up in flames and so did the livelihood of several small business owners.

On Wednesday evening, what started off as a seemingly minor situation of merely smoke at one end of the building, ended up as a building engulfed in violent flames that swept through all the businesses there-in leaving nothing useful behind. Sharon’s Mall is located on 154 King and Charlotte Streets, Georgetown and was destroyed completely that night, but not before posing a threat to the High Court nearby. The Village Voice News reached out to several of the small business owners who had rented spaces within to better understand their financial losses and their take on the situation.

“I’m just trying to move on from it right now because the same day when the fire occurred that’s the day I would have restocked my business with almost $1 million in new stocks along with products that were there before. So, I’m estimating my loss at nearly 2 million dollars and more,” Alli said.

S&S sells beauty, cosmetic and personal care items. The businesswoman said that loss has hit her hard but she still considers herself lucky compared to other businesses as she also has pick-up locations in Essequibo, Diamond Scheme, Berbice and Linden.

NO LOSS BIGGER THAN THE OTHER

As such, she is willing to assist businesses from the Mall which are currently in need. “I still count myself fortunate because I know there are other business owners who are suffering even more than I have suffered but, in a case like this, I don’t think anyone’s loss is bigger than anyone because we all go there for one purpose and that is to make a living,”  she said.

Those wishing to contact Ms. Alli to purchase or for financial assistance can do so at 668-9869. Still, she hopes that word will come soon from the owner of Sharon’s Mall who said, as of Friday, was overseas and had not yet arrived in the country to update the business owners on what could be done about the situation.

“It is very hard because the management system at the mall, it’s not nice because they had a manager who was in charge of the building and I would say that she was kind of lackadaisical. If you report something or if there was a problem she would take her own time before she attends to the issue,” she said. “No one [in charge of the mall] has reached out to any of the store owners; there was no discussion about compensation, there was no discussion about whether the building was insured or not, people are just suggesting that it was insured and we’re hoping it was insured.”

Meanwhile, owner of FreeStylz, Ms. Khan was facing double the loss as both she and her mother lost businesses to the fire. FreeStylz sells clothing primarily and Ms. Khan had been operating there for about five years and her mother a little less. She was there when occupants of the building began smelling smoke and at first thought that maybe someone had lit a candle. Then, she began checking the charging points and plugged out appliances. Soon, other persons began smelling smoke and when they left the building they saw smoke was coming from the building.

They did the wise thing and called the Fire Service thinking that the matter — minor-looking at the time — would be solved. They didn’t grab any of the items within their stores and never had another chance to do so. “I had everything there, I don’t have anywhere else that I store stuff, everything was there…this thing is so surreal like I’m still absorbing it,” Khan said, later adding: “I also have my mom here who had her business downstairs, she had the kids stuff.”

Asked whether the management of the Mall contacted her she replied in the negative. While she is still trying to grapple with the loss she said that her mother is devastated and simply cannot manage what occurred. “It’s not like I can brace her and she can brace me…she can’t deal with it, she’s taking it really hard,” Khan said.  She understands that as a business owner it is her responsibility to take control of her business insurance and is not looking forward solely for compensation or donations. While she will accept such if offered, Khan said that in such times what she and her mother appreciate the most are the calls from friends and family and the kind words of support.

“Even if it’s somebody calling to express their gratitude that’s fine by me. We live in a society where we base everything on finance, we shouldn’t. Yes finance is important but one thing that I’m grateful for is that nobody is hurt, everybody came out with their life,” she said sadly but optimistic. Persons willing to assist can contact Ms. Khan at 664-7102.

IT HURTS AS A SMALL BUSINESS OWNER

Another one of the persons facing losses is a young businesswoman and owner of La Moda Gy, Danica Drepaul. La Moda Gy is a clothing store catering to women’s fashion. One of its most expensive items to source for customers is the body shaper, many of which were destroyed during the fire. “I haven’t sat down and put the prices for everything but it comes up to about 3 to 4 million because it was not only the clothing, I used to sell the body shapers as well. Two weeks ago, I brought in a big quantity like 300,000 in shapewear and all of that is gone,” she said.

The said location was the only one for Drepaul who had been operating there for about two years. She said that the emotions are hitting her in waves. Sometimes she feels okay but at other times she’s overcome with emotions when she truly thinks about it. Drepaul hopes to restart her business online after taking some time to herself to mentally deal with the loss. Asked on Friday whether the owner or manager of the Mall contacted her she said: “No, I spoke with the other persons who were there and owned businesses and no one contacted them either. Right now, it’s up in the air.”

At the moment, financial assistance would best suit La Moda Gy so that new items can be purchased for resale. Persons interested can contact Drepaul at 6270126.

Losing everything as well at Tali & Sha’s Beauty Parlour by Sharon was Sharon Worrell. She lost her hair dryers, pedicure station, hydraulic chairs, tables, fans, a television, water dispenser and more after operating the Mall for almost a year.

Like the others, the owners of the Mall have not contacted her. She has no other alternative to what was once her main business. “I’m looking for somewhere to see if I can get something to do but, so far, I ain’t get through with anything as yet, I’m still working towards it. This is the only thing I get income from, I’m a single parent and I have a home that I have to pay the mortgage on,” Worrell said. Persons interested in assisting Worrell to restart her business should contact her at 663-9309.

The Village Voice News also spoke with, Ms. Nohar owner of Target Logistics Inc. who counts herself and her business lucky as they moved out of the Mall just two weeks prior. “I feel blessed that I was able to move and secondly, at the same time, I feel horrified,” she said.

“I know some of the businesses and some of them, really that’s their only source of income and the only place that they can operate form and some of them would have said that they re-stocked their stores the day before or two days before because Mothers’ Day is coming up and they were preparing for the Mothers’ Day sale.” In light of Wednesday night’s fire that devastated the Sharon’s Mall the Ministry of Home Affairs is urging that buildings over two stories high must be equipped with riser mains with hoses and fire sprinkler systems.

Though the fire started around 17:00 hours with just smoke seen in the building, firemen struggled to put out the smoke resulting in a full-blown fire that engulfed the building. “This is really sad, for two hours they couldn’t put out the smoke and now this fire has taken over the building,” one of the tenants at the mall remarked during an interview with reporters. The Home Affairs Ministry said building inspections for electrical and fire safety compliance are mandatory for such buildings and must be diligently pursued.

Sun May 2 , 2021
Support Village Voice News With a Donation of Your Choice. A 32- year- old woman was killed Saturday night by her partner following an argument at her D’urban Street home. Dead is Nicola Wilson. Persons at the scene reported that Wilson had moments earlier returned home when she was confronted by her partner , known as ‘Lawrence’. The man accused […] 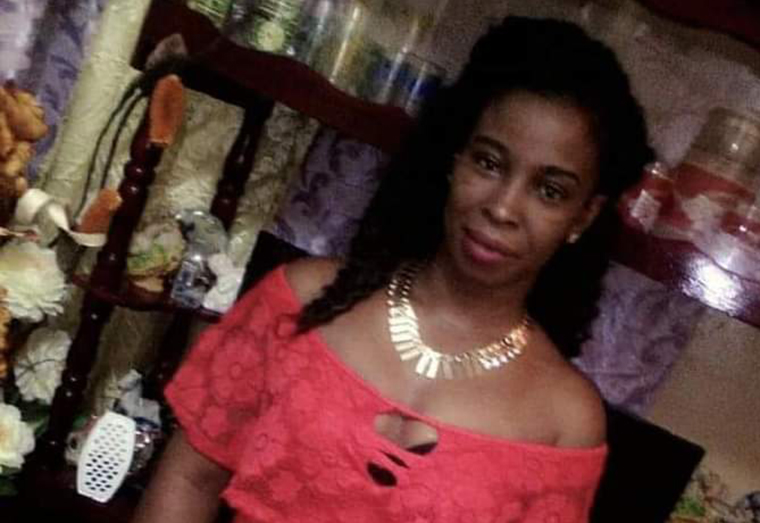