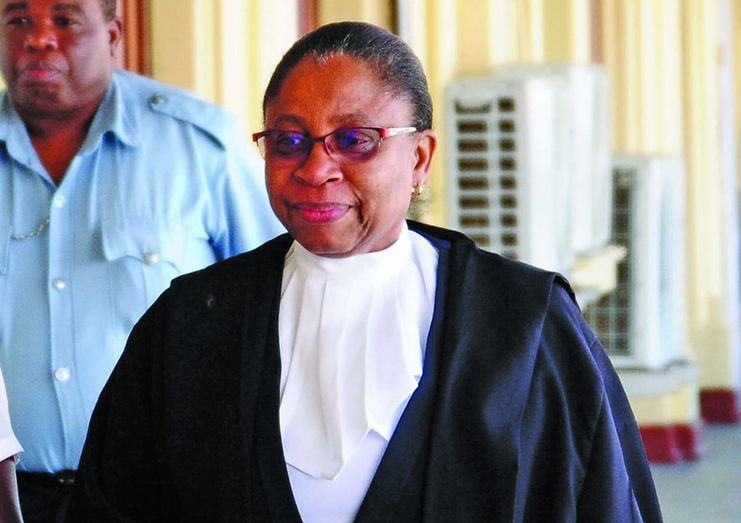 ...as ruling in Election Petition case set for Monday
–both sides express confidence ahead of decision

Ahead of the High Court’s ruling on the Elections Petition (88) challenging the results of the 2020 Elections as declared by the Guyana Elections Commission (GECOM), both sides are optimistic that the Court will rule their favour.

In declaring the results of the elections on August 2, 2020, GECOM had relied heavily on Order 60 – the National Recount Order – however the petitioners, Claudette Thorne and Heston Bostwick through their battery of lawyers, have maintained that Section 22 of the Elections Laws (Amendment) Act, for which GECOM relied on to bring the Order into effect, is unconstitutional.

Chief Justice (ag) Roxane George is expected to hand down the ruling on Monday, April 26 at 11:00am.

On Saturday (April 24), Senior Counsel Roysdale Forde, who forms part of the battery of lawyers representing the petitioners, told Village Voice Newspaper that he is optimistic that the petitioners will win the petition.

“We are optimistic. We expect the Court to rule that Section 22 of the Election Laws Amendment Act and Order 60 of 2020 are unconstitutional,” the Senior Counsel said while adding that the Constitution does not confer power on GECOM to conduct a National Recount and or set aside the declarations made by the Returning Officers.

He submitted that an election could only be set aside by way of an Election Petition. “The power conferred on GECOM by Section 22 [of the Election Laws (Amendment) Act] is a law making power reserved under the Constitution for Parliament,” Forde told this newspaper.

Added to that, he said the results of the recount varied substantially from the results as stated in the declarations.

But the Attorney General Anil Nandlall, S.C, who is a respondent in the matter, told Village Voice News that the case submitted by the petitioners lacks merit and ought to be dismissed by the Court.

“I am confident that the petition will be dismissed,” he told this newspaper.

The Attorney General explained that “the petition challenged the recount process and the recount order as well as the statutory provisions under which the recount order was issued…Both the Constitution and the Election Laws (Amendment) Act allow, cumulatively, once there is a problem for GECOM to take such steps that are necessary and expedient to declare the election results.”

The Attorney General said it is undisputed that challenges arose during the tabulation of Statements of Poll by the Region Four Returning Officer (RO) Clairmont Mingo.

“The Returning Officer of Region No. 4 did not use Statements of Poll as a basis for declaring the results, that he used a fictitious spreadsheet; as a result, the results declared for Region No. 4 were not in accordance with the votes cast,” Nandlall said.

He told Village Voice Newspaper that upon realizing that there was such a problem, Chairman of GECOM, Justice (Ret’d) Claudette Singh gave an undertaking to facilitate a recount – a decision, which was supported by the Elections Commission.

Further to that, the Attorney General contended that the Court of Appeal, in considering the Ulita Moore Case in April 2020, did not declare the then proposed National Recount to be illegal.

“That is how the recount was proceeded with. Of course, in the meanwhile, you had an agreement between the Leader of the Opposition and the President to conduct the Recount. All the parties participated in the Recount; the ballots were counted; each ballot was counted, and totaled, and it is that total that was declared as the results of the elections,” the Attorney General said.

He said there is nothing illegal about the National Recount, and iterated his call for the Court to dismiss the Election Petition. “The recount was done for the whole country, supervised by GECOM, and observed by a CARICOM team that certified the process to be credible, and fair and lawful; and so the petition in my view should have never been filed,” the Attorney General said.

During the presentation of oral arguments earlier this month, GECOM’s Attorney, Senior Counsel Anthony Astaphan told the High Court that GECOM acted in accordance with Section 22 of the Elections Laws (Amendment) Act, which sets the foundation for the Election Commission to address difficulties arising during an election.

Further, Astaphan submitted that the Caribbean Court of Justice (CCJ), in its 2020 ruling, had ratified directly or indirectly the purpose, motive and lawfulness of Order 60 for the purpose of removing “the difficulties which were slowly but surely driving Guyana into a series of severe social and political upheaval.”

“We are submitting that there is nothing pleaded in this case to suggest any sort of total non-compliance with the provisions of the Representation of the Peoples Act, which required there to be a recount to remove the difficulties that were being experienced by GECOM and the country…,”he submitted.

Vice President Bharrat Jagdeo, through his attorney, Senior Counsel Douglas Mendes had also argued in favour of the recount.

Mon Apr 26 , 2021
Support Village Voice News With a Donation of Your Choice. …lack of gadgets for most children, hurting education pursuits By Svetlana Marshall   Speightland is a close-knit Indigenous community located a short distance away from the old Aluminium Factory at Mackenzie, Linden. To an extent it is bordered by the Kara Kara Creek. Usually quiet, the community would often come […]