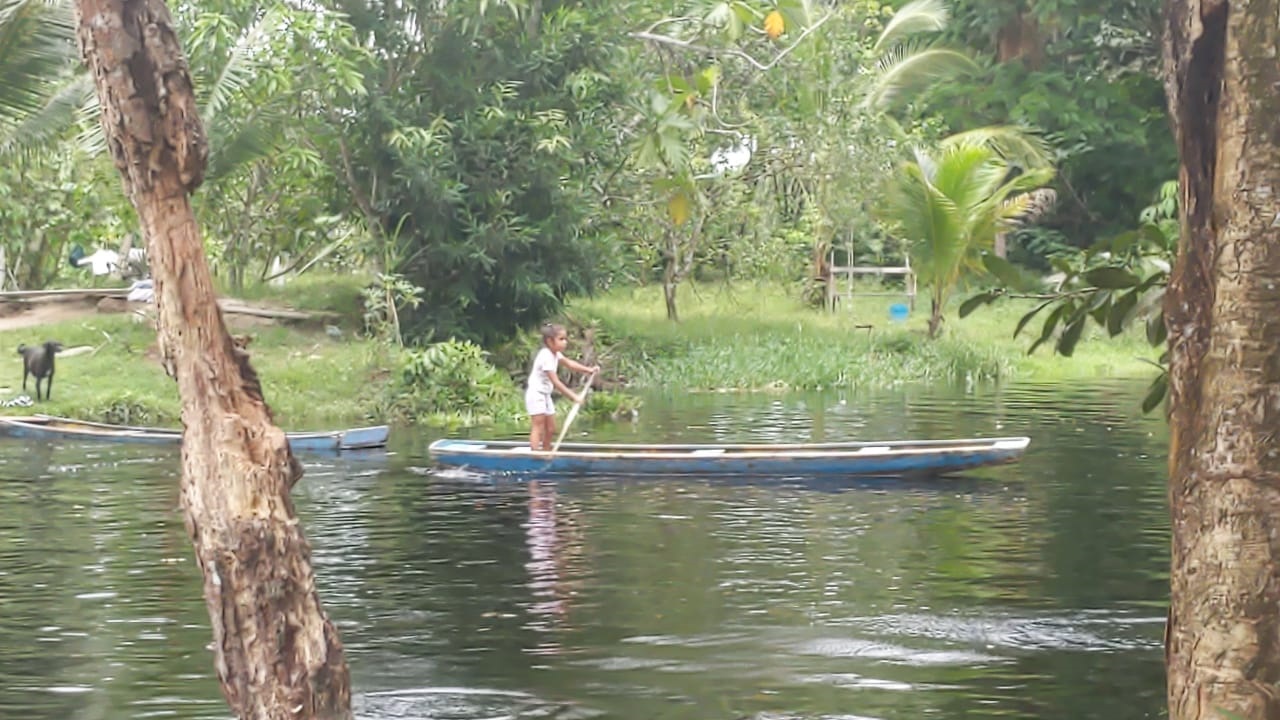 …lack of gadgets for most children, hurting education pursuits

Speightland is a close-knit Indigenous community located a short distance away from the old Aluminium Factory at Mackenzie, Linden. To an extent it is bordered by the Kara Kara Creek.

Usually quiet, the community would often come alive during the midafternoon with loud chatter from residents as they paddle across the Kara Kara Creek or from the laughter of children as they swing from branch to branch before plunging into the creek.

During a recent visit to Speightland, 82-year-old Denis Stellingburg, who is also known as Allan Cornelius, told Village Voice Newspaper that the community was originally called Lower Kara Kara but the name was later changed to Speightland.

“I born and grow here,” Stellingburg said as he took a break from his sewing machine. A tailor by profession, Stellingburg said pre-independence the community was inhabited by just a few families – the Stellingburg’s, the Cornelius’, the Allicock’s and the Johannes’ among others, all of whom engaged in farming activities.

At the time of Independence, Stellingburg was 27 years old. “Back then we drank water from the creek,” the elderly man recalled. But he said times have changed. The father of six explained that over the years, the community has rapidly expanded and residents now have access to water and electricity in their homes.

“I have no complaints. There is nothing bothering me,” the 82-year-old said while explaining that nowadays he enjoys the comfort of his hammock after preparing his meals. Periodically, he would sew for his clients to secure money to complement his pension.

Twenty-seven-year-old Juliet Da Silva, whose family moved to Speightland from West Watooka when she was just an infant, also made a call for the roads in the community to be upgraded.

According to her, it has been many years since the roads in Speightland were last upgraded. Added to that she made a call for there to be street lights, and for the community ground to be upgraded as well. Apart from that, Da Silva said life in Speightland has been good. She operates the family shop in the community, providing much needed goods and services to the people of Speightland.

But for 33-year-old Ramona Stellingburg, a mother of three said while infrastructural development is needed, the children of Speightland are in urgent need of help especially during the ongoing COVID-19 pandemic.

The pandemic has forced the Education Ministry, like in other parts of the world, to close the schools, and resort to e-learning using apps such as Google Meet, Whatsapp and Zoom, but with little access to the appropriate technological devices and internet, many children in Speightland are unable to participate in the e-learning.

“It is really hard in Speightland especially because most of the children them don’t even have gadgets and it is online school right now. My daughter she aint do no work since school close because I have a phone but it doesn’t work properly,” Stellingburg explained.

Her daughter is nine-years-old and is currently in Grade 4. Stellingburg said that while she attempts to use the cellular phone at times, she is unable to pay for internet on a regular basis. “I got one of the booklets, that is what she has been working on, but that’s all,” the concerned mother said while speaking to Village Voice News as she paddled her boat across the Kara Kara Creek.

That aside, Stellingburg, who has been living in Speightland all of her life, also made a call for the mouth of the Kara Kara Creek to be dredged. She explained that the built up of stand at times make it difficult to maneuver in the creek which connects with the Demerara River.

“Especially with the creek mouth, we glad if we can get some help because when the water really low the engine them touching and the beach out there really big and sometimes the ships would stick up at the creek mouth,” she explained.

But those issues aside, Stellingburg, who farms for a living, said she wouldn’t trade Speightland for any other community. “I love it here, it is peaceful, we have the creek as a source of water, a source of food, it’s nice,” she said.

Another resident, Leon Fiedtkou has been living in Speightland for approximately 25 years, having moved from Malali in the Upper Demerara River. As he sat among his many fruit trees, Fiedtkou told Village Voice News that he moved to Linden in 1992 and took up residence in Christianburg before moving to Speightland in 1995. “I came down here so that my children could go to secondary school,” he said.  He said though the community at the time was populated there was no potable water or electricity, and many residents had little choice but to source water from the Kara Kara Creek or the Aluminum Plant.

According to Fiedtkou it was as a result of the intervention of Phillip Bynoe, a regional leader, that residents were able to mobilise and run pipes to their homes through a self-help initiative. Fiedtkou said though the community has come a long way and now enjoys the basic amenities, water, electricity, telephone services and even internet access, there is room for greater development to take place. The pensioner, who spends his days tending to his fruit trees and his dogs, made a pitch for the roads in the community to be rehabilitated. He also called for the community’s playfield to be upgraded to a recreational facility with bleachers.  “We want better roads because the roads terrible here at the back and we need a proper playground for the children,” he told this newspaper.  Fiedtkou plants oranges, papayas, cherries, cane, pears and coconut just to name a few.

Thirty-nine-year-old Galilea Da Silva was also born in the community of Speightland. Today he lives in the community with his wife and two children. Da Silva said he has witnessed firsthand the transformation of the community but like the others, he made a case for there to be greater improvements. He pointed out that that while the community has access to electricity, water, internet and telephone services, there is no health centre or nursery school within Speightland, though these facilities can be found in the neightbouring community of Retrieve.

Da Silva explained that the health center found on the outskirts of Speightland is often overcrowded as it attracts not only residents from Retrieve and Speightland but those from Dalawala as well, a community further down the Demerara River.

“We need at least a nursery school, we need the roads to be fixed, proper drainage like the other communities, and we need our ballfield to be upgraded,” Da Silva told this newspaper.

Mon Apr 26 , 2021
Support Village Voice News With a Donation of Your Choice. Today acting Chief Justice Roxane George-Wiltshire is expected to hand down her ruling on Elections Petition (88) challenging the results of the 2020 Elections as declared by the Guyana Elections Commission (GECOM). As society expects to hear this decision, and optimism is expressed by both sides the judgment will be […]