ChildLinK launched its localized Blue Umbrella Day (BUD) on April 16th that is part of their two-year public education campaign focusing on the care of boys. The BUD campaign has been initiated by Family For Every Child (a global network) and launched in several member countries including India, Philippines and Paraguay.

The Blue Umbrella Day raises awareness of how to better care for boys and protect them from sexual violence.   The findings from the Caring for Boys research conducted by Family For Every Child indicated that “sexual violence affecting boys remains largely unknown, unacknowledged and not responded to, across a wide range of contexts and cultures, mostly as a result of gendered social norms, which influence perceptions of boys’ vulnerability. These also pose an obstacle to disclosure by boys, identification and acceptance by others, recognition of harm caused, and recognition of the support needed to recover”.

Sexual violence against boys is often an unexplored issue, resulting in lack of awareness and support for those who are survivors of abuse. Given the urgent need for focused care for boys, ChildLinK incorporated BUD into its existing One Thousand Boys initiative (OTB). The OTB action commenced in July 2020 and has been widening collaboration, increasing the target groups, delivering services in regions where no services currently exist and place greater emphasis on men and boys both as victims and perpetrators but more critically as advocates for preventing Child Sexual Abuse (CSA).

At the launch of the research-backed campaign, Head of Cooperation, EU Delegation of the European Union, Karel Lizerot said, “It is an inverted gender issue to speak about the abuse of boys, because it touches on so many taboos. I am happy that the EU can support an initiative that not only promotes discussions but also are actively working on the issue. Boys are often neglected victims and I am glad that we can search for the truth with this project.”

The EU has provided ChildLinK with a three-year grant that covers 90% of the One Thousand Boys initiative that centers on the care of boys. Lizerot said that through the EU’s efforts to promote positive values, it has been working with governments and Civil Society Organizations in partner countries. “ChildLinK is a very successful implementing partner, they are very responsible, accountable and a true civil society leader in Guyana. This is not an isolated project as it works as part of a holistic dialogue with the government. It is a sustainable approach that is owned by Guyana,” said Lizerot.

Lead Researcher on the One Thousand Boys research, Dr. Paulette Henry said there exists many social norms and practices that contribute towards CSA. The research will address the deeper societal and cultural complexities of CSA and identify the harmful social norms drivers of CSA to increase the responsibility on adults in protecting children.  Harmful sexual behaviors are often taught to boys and girls through their parents’ actions or inactions. Harmful family structures lack of enforcement of child protection laws, no reporting from family members, and insufficient protection for survivors of abuse all contribute towards the prevalence of CSA. “There is a great underreporting of sexual assault of boys. It is believed to be far more common than is currently thought, with boys being just as vulnerable as girls but shame and guilt often inhibits reporting,” said Dr. Henry.

Delivering the feature address at the launch, Minister of Human Services and Social Security, Dr. Vindhya Persaud underscored the importance of placing the spotlight on violence against boys. “This partnership that exists between government and CSOs is integral to seriously tackle and bring about the main outcome of having safer children. I would like to commend and congratulate ChildLinK for their passionate advocacy, their creative approaches and especially this one that focuses on one thousand teen boys and also partnering with hundreds of men so that they can become advocates for the awareness campaign and end stigma as it relates to reporting and intervention,” said Dr. Persaud.

The OTB will expand the child advocacy centre (CAC) services to children who report child sexual abuse.  ChildLinK is currently operating CACs in Regions 3, 4, 5 and 6. Support gained from the Spotlight Initiative Guyana was instrumental in operationalizing the CAC in Region 6. Under the OTB new CACs services will be made available in Reg 8 and 9 with the aim that children in all Regions in Guyana will have access to the CAC services.

'You can't approbate and reprobate'

Wed Apr 21 , 2021
Support Village Voice News With a Donation of Your Choice. —CJ tells Nandlall in ruling that PPP/C Parliamentary Secretaries sitting illegally in Parliament  By Svetlana Marshall Chief Justice (ag), Roxane George, in ruling that Sarah Browne and Vikash Ramkissoon were unlawfully appointed Parliamentary Secretaries in the National Assembly, said the Attorney General, Anil Nandlall, in an attempt to defend the […] 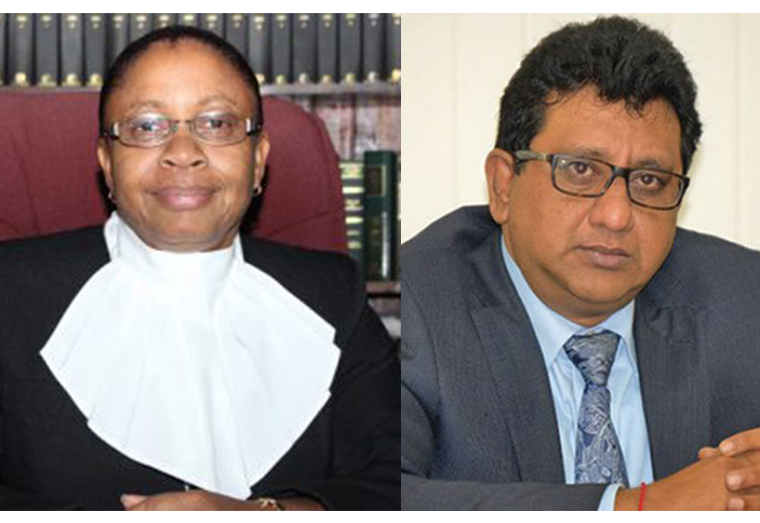