When a passenger enters a minibus for public transportation, it is the duty of the minibus operators therein to take that passenger safely and comfortably to their destination in exchange for the set price of the service.

However, when such service is not being met, it is the onus of the passenger to highlight and demand such service. It is also the duty of law enforcement and other Governmental authorities to administer consequences to minibus operators who refuse to comply. In all parts of the world, this can generally be understood and accepted. However, in Guyana, many passengers are not transported safely or comfortably; they are asked to pay above the set price; they are exposed to loud and explicit music, overloading, reckless driving, poor customer service, drug use, verbal abuse and, more recently, the threat of COVID-19 due to maskless passengers and operators.

ONE OF MANY INSTANCES

Just recently, Odella Peroune shared her experience on Facebook in a video that has since gone viral showing a route #42 bus driver/conductor, identified as Josh Harry, grabbing her phone out of her hand after she began filming his negative reaction to being asked to turn down the vulgar music being played.

“You could turn down the music, please?” Peroune asked as the driver argued back and the music continued to play. “I just asking you to turn down the music, you playing cussin’ music, indecent language deh in yuh music, children deh pon yuh bus.” The man then brought the minibus to a stop, went around to open the bus door and confronted the woman verbally before roughly grabbing her phone from her hand.”

The video sent Guyanese into a frenzy and the Guyana Police Force (GPF) later confirmed that the man has been arrested. However, how many haven’t faced such consequences for their deplorable service? This is a rhetorical question President of the United Minibus Union (UNU), Eon Andrews asked in an interview with the Village Voice News.

Andrews said that while there is a Code of Conduct that all minibus operators are aware of, established since February 2019, several factors enable some minibus operators to mistreat passengers and endanger their lives. These include insufficient enforcement of the Code and Law; indifferent passengers, and collusion, in some cases, with the police.

In February 2019, the Code of Conduct for minibus operators and other personnel was launched, published and disseminated within the public. It outlines what is expected of operators of public transportation. However, how effective or ineffective this Code has been is relative to how effective or ineffective enforcement has been. The Code of Conduct was brought about to curb the aforementioned ill behaviour of some minibus operators but such acts still continue. The UMU President said that while the police have been arresting touts and minibus operators for unlawful actions, many in the public do not yet feel that insulated from the horrors faced on public transportation. “I don’t know how he [the arrested driver/conductor] got his Conductor’s License. That’s another thing we’re concerned about where you see these touts on the park and all of them have Conductor’s Licenses. That is why, with the Code of Conduct, they’re trying to advocate that unless you’re trained you cannot get a Conductor’s License,” Andrews said.

He noted too that the Ministries of Home Affairs and Tourism, Industry and Commerce are also trying to advocate to make it mandatory for training prior to one’s receipt of a Conductor’s License. Thus far, a total of 246 operators have been trained in hospitality, fire safety and insurance, according to the Director of the Department of Consumer Affairs, Muriel Tinnis.

She told the Village Voice News: “What we discovered is just a few areas have been following the rules like #56, Bartica and the #45 route. What we find is that only in Georgetown, like the #45, #41 and #42 are troublesome. That’s where you find more of the young people driving buses and they don’t want to join the Union”.

COVID-19 has since stymied training but it is expected to recommence soon with the criterion for operators to first be a part of the UMU. Andrews said that a number of minibus operators are not members of the Union or are only active members when they hope to gain some benefit in return. The issue remains that many operators still do not see the provision of the public service as a job but as a “hustle”. There are efforts to make it mandatory that, like public servants, minibus operators face a three-month probation period of operation before it is determined by authorities whether they have been approved to continue their service. In other cases, Tinnis said that because many minibus operators do not own the buses they operate, a high level of disregard is shown for customer service. She said that some bus owners do not enforce that operators follow the Code of Conduct and are concerned only about making their financial returns at the end of each day. The operator is therefore expected to do whatever it takes to achieve this.

In a second video shared, Peroune said that there was a man who, when the bus stopped, defended her before the incident escalated even further. The woman said: “Everyone on the bus was not passive, there was a very outspoken gentleman on the bus. Thank you, sir, for coming to my defense.”

Unfortunately, Andrews and Tinnis said that this is not common. Many times, passengers remain silent and indifferent when others within the bus are speaking up due to their fear of confrontation or fear of being put off the bus — an act the minibus operator has no right to do in such cases. In other instances, some passengers take the side of the operator and help to silence the complaining passenger.

Speaking to the latter, Andrews said: “These are brutal customers. I think that’s where some passengers are afraid to speak because you have passengers in that bus that attack that person more viciously than even the service provider.”

Meanwhile, Tinnis urged: “I would say to passengers, let’s try to be vigilant, work together to eliminate this scourge that we are faced with…I’m sure they had people in that bus who sat there and did not represent that woman. So, I want to urge consumers to be vigilant…you have rights and you need to demand that your rights are respected.” Added to this, the UMU President said that the police have also complained that in many cases, while passengers report minibus operators to the station, the passenger doesn’t follow through by turning up to Court as a witness which leads to the case being dismissed. For the police to be effective, he underscored, those who report such cases have to be prepared to go all the way.

POSSIBLE COLLUSION
Another major issue is that some minibuses are owned by members of law enforcement, Andrews alleges. This, he said, sees them escaping consequence when entangled with the law for reckless operation. “My most disturbing experience…I was standing at the park and I saw a maskless tout tell an operator ‘wait, you ain’t just get lock up?’ and the operator was very vocal, he said ‘get lock up? Don’t worry with Wickham and them, when I call the big boy he just seh loose me! Them could hold me?’ So I see a lot of police are concerned that when they attempt to do their jobs diligently, there are elements in the Force who give the order that they must be released.”

In light of the challenges along the way to improvement, the Department of Consumer Affairs encourages members of the public who are not being provided with proper service to report the same to the Department and the police so that changes can be made or consequences faced.

Along with the Code of Conduct, the Department plans to launch a booklet soon for passengers informing them of their rights while utilizing public transportation.

Mon Apr 19 , 2021
Support Village Voice News With a Donation of Your Choice. …GCCI urges members, citizens to take Covid-19 vaccines    Given the unprecedented and devastating nature of the COVID-19 pandemic, the Georgetown Chamber of Commerce and Industry (GCCI) is encouraging its members, local businesses and the general public to commit to supporting the robust COVID-19 vaccination efforts of the Ministry of […] 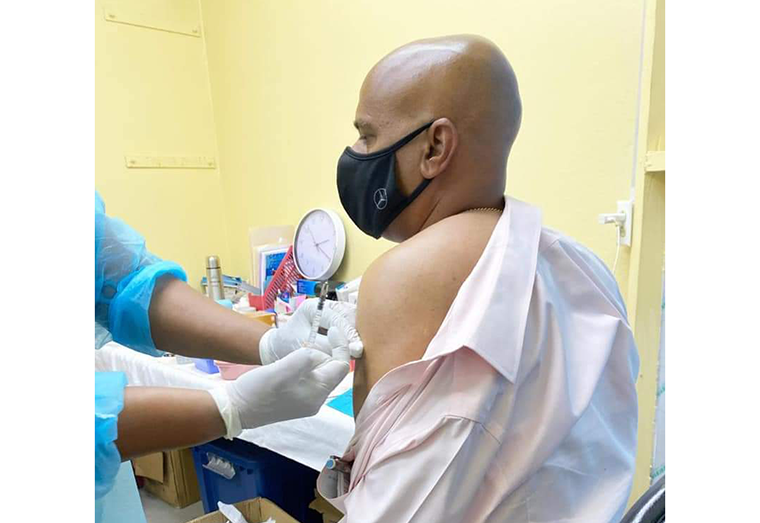