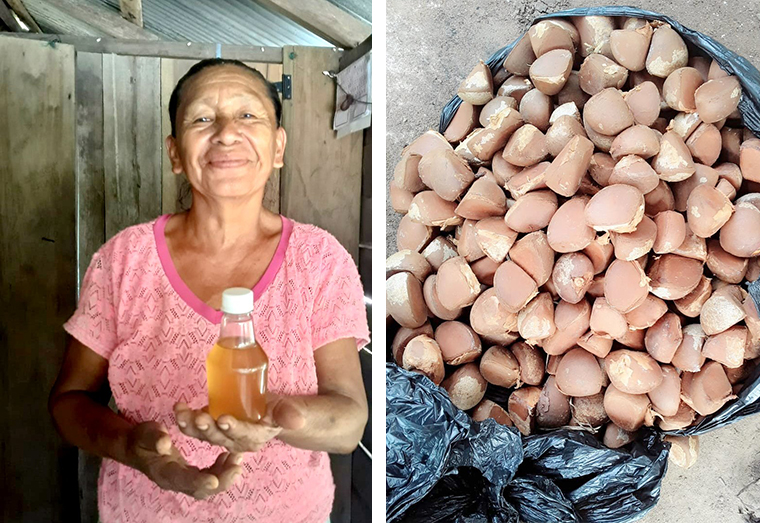 Crab oil is one of the most sought-after products in Guyana and it also carries a hefty price tag. For Aunt Bridget Abraham, the prices are justified since making the product is very demanding; a month-long process which requires patience, skill and timing.

The product is usually in demand by young mothers who use it for a condition in babies known as ‘Trush’ but did you know it us also used for healthy hair growth and smooth skin?

According to Aunt Bridget, the oil which us also known as ‘Andiroba oil’, comes from the inner parts of the crabwood seed. To get to that stage, she collects dozens of the seed from trees in the area at Four Miles, Karaburi on the outskirts of Santa Rosa, Moruca. Her daughter Collette would also gather as much crabwood seeds as possible for her mother to make the oil.

After gathering a half garbage bag full of the seeds, Aunt Bridget explained to the Village Voice that she boils the seeds in a pot using a bucket of water. When the water evaporates , she fills it once more with another bucket full of water. That process is repeated once more and she then leaves the seed to dry for 3 weeks. When that time expires, she said she opens each seed, a manually demanding process.

The ‘flesh’ of the seed, she said is wrapped into a dough. As in the bread baking process, a ‘kneed’ is undertaken on the dough of the

flesh. When this is done repeatedly, she places the dough on a zinc in the sun. She said care is taken to ensure the zinc drains the oil which emerges from the dough , into a bucket. The oil is then collected after hours of waiting and bottled for sale.

When Aunt Bridget spoke to the Village Voice last weekend, she was preparing 4 bottles of 1-litre units of oil for sale.She said she learnt to make the oil from her mother-in-law many years ago. Her husband worked at the hospital at Kumaka and he would take orders from persons there.

In addition to use on babies, the crab oil is also used for the treatment of dandruff. It is also used as an anti-wrinkle remedy and although it has a bitter taste, some persons use the product as a laxative.

‘No room for gridlock’

Sun Apr 18 , 2021
Support Village Voice News With a Donation of Your Choice. …U.S, U.K urge dialogue between govt, opposition    …say healthy democracy requires robust debates …different point of views must be respected    By Svetlana Marshall   “A healthy democracy requires robust debates from all points of view, and all voices deserve recognition,” US Ambassador Sarah-Ann Lynch said in response to […]